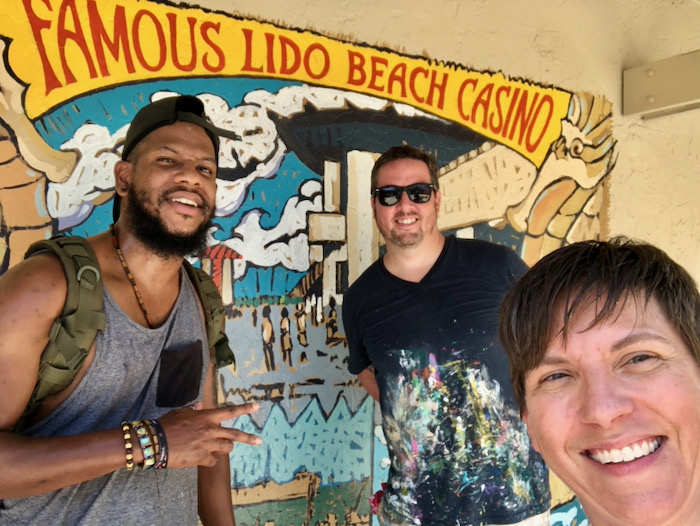 Some 400 years ago Shakespeare opined “What’s past is prologue.”  That quote from “The Tempest” is engraved on a statue in front of the National Archives Building in Washington, D.C. 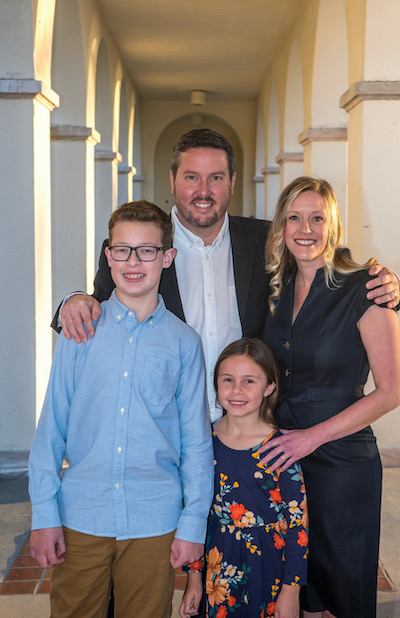 Tim Jaeger buys into that sentiment.  Director and Chief Curator of Galleries and Exhibitions at the Ringling College of Art and Design, Tim works to involve the community in the visual arts.  Tim’s an artist, art historian and visual storyteller.  He reaches out to other artists and community members to assist him in creating historical murals.

In the 1950s, Overtown and Newtown, north of downtown Sarasota, FL, were almost exclusively black neighborhoods.  Many residents worked harvesting celery in the Celery Fields near Laurel Oak, the golf and tennis community where Burton and I spend much of winter.  In the 1920s, the Celery Fields were part of 300+ acre Fancee Farms.

In 1994, Sarasota County purchased the farmland to revert it to its original rainwater storage function.  Dirt was moved from one side of Palmer Road to the other side.  At the time, I considered the project an example of needless government spending.  Glad to admit I was wrong.  The dirt that was moved became a man-made hill—the highest point in Sarasota.  It’s now a popular spot for bird watching and hiking and the headquarters for The Sarasota Audubon Society.  And downstream flooding is no longer a problem.

But back to Overtown.  At the time, African-American residents longed to cool off on weekends at area beaches.  Due to Jim Crow laws, those so-called public county beaches were segregated.  Black children cooled off in neighborhood water holes after rainstorms.

In September, 1955, Sarasota NAACP President Neil Humphrey Sr. led a “wade-in.”  Dozens of Newtown residents piled into cars and drove to Lido Beach just off tony St. Armand’s Circle.  They jumped into the water or strolled the shores.  About 100 protesters showed up again the next month.  Sunday wade-ins and car caravans continued for several years.  Humphrey and his NAACP successor John Rivers and Overtown/Newtown residents continued demanding their rights to enjoy public beaches through wade-ins or drive-bys.  While the Civil Rights Act of 1964 banned discrimination, the beaches still weren’t integrated for several more years.

Last year artist Tim Jaeger decided to honor that struggle.  Commissioned by the Arts & Cultural Alliance of Sarasota, he created two 7’x8’ murals at the pavilion on Lido Key.  From on-line photographs of the events, Tim designed five panels illustrating the wade-ins and car caravans.  Images feature residents of Sarasota’s African-American community, many unable to be identified.  To help conceive and paint images, Tim enlisted community groups including the Preservation of Overtown Committee and a diverse team of artists.

“I believe in the collective spirit and the power of art to preserve history and encourage conversation,” Tim says.  “The more ideas and dialogue that go into a project, the greater the appreciation that results.

The Lido pavilion was part of the Lido Beach Casino, opened in 1940 as a Works Progress Administration project. Designed by Sarasota School architect Ralph Twitchell, it housed a ballroom, restaurants, shops and a pool with a high diving board.  Its modern white walls and glass block represented a break from the Mediterranean Revival style that dominated much of Sarasota’s earlier construction.  The casino was popular with locals and tourists alike.  On weekends, the USS Sarasota battleship dropped off troops for R&R.

My Ringling friend Anne Garlington introduced me to Tim at a quilt exhibition he mounted at Ringling in January.  “Ringgold + Robinson: Storytellers,” featuring African-American female artists Faith Ringgold and Aminah Robinson, was delightful.  It was prescient in referencing social issues that have lately overtaken the national dialogue.

Tim’s grandfather, G.M. Jaeger, was a draftsman.  Tim credits him for his artistic talent.  The Depression prevented G.M. from pursuing a career as an artist, but Tim’s proud to own his work.  Tim was one of five children.  His dad was an Episcopal priest.  “Our family didn’t have much money,” Tim says.  “My mother figured ways to keep us occupied.  Pencils and paper were cheap.”  One of Tim’s siblings became a graphic designer; another, a poet.

“I feel fortunate to have been fourth of five,” Tim says.  “I had to develop sharp elbows just to eat at our table.  It helped to make me competitive.  I also feel lucky to label myself as a pre-internet artist.  That propelled me further into using my hands.”

Tim’s wife, Cassia Kite-Jaeger, hails from Auburn, Nebraska, where her father’s a fifth-generation cattle farmer.  Cassia’s a fiber artist who teaches at IMG Academy.   The Jaegers have a son, Jett, 12, and a daughter, Nina, 7.  Both are artistic.

Tim first heard of Ringling from a trustee friend of his grandfather who brought a catalogue to church.  “I dissected it,” Tim says.  He entered a month-long, pre-college program at RCAD, loved it, received an award and then a full four-year scholarship.

“I was a goofy kid raised in Western Kentucky,” Tim says.  “I moved to south Florida for art school—one of the best decisions I ever made.”

Fellow Sarasota lovers are happy you made that decision as well, Tim.  Thanks for sharing your talents, and our history, with us. 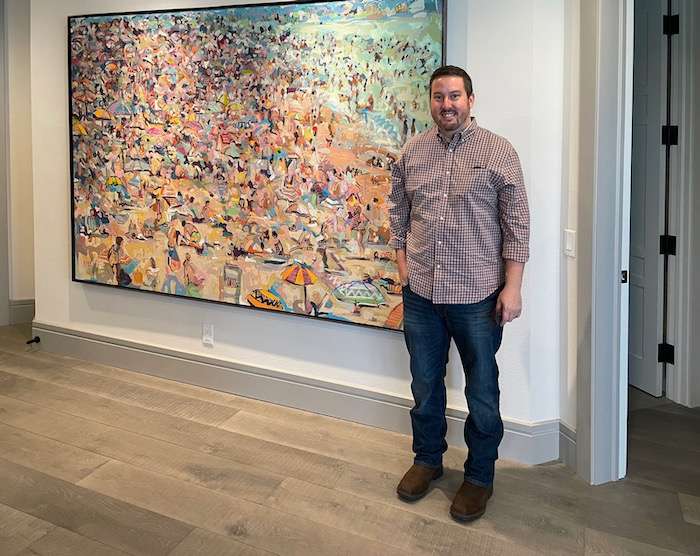 Tim stands in front of a beach scene he painted in oil and acrylic on canvas: “Human Nature #3”