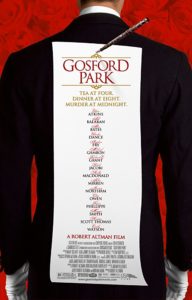 Director Robert Altman returns to the screen in fine form with this engrossing tale that is part comedy of manners and social commentary and part whodunit. Set in a lavish English country estate in 1932, the huge ensemble cast consists, among others, of Maggie Smith, Alan Bates, Kristin Scott Thomas, Michael Gambon, Derek Jacobi, Emily Watson, Kelly Macdonald, Stephen Fry, Helen Mirren, and Alan Bates. In dozens of ways we see the class disparity between the servants and their employers. The film opens with Kelly Macdonald’s Mary standing in the rain waiting for her crusty mistress Constance, Countess of Trentham (Maggie Smith), to decide the moment when she will venture forth through the rain to her motor car. The Countess is protected by an umbrella, the drenched Mary is not. Enroute Mary has to leave the front seat of the car and come around through the heavy downpour to remove the cap of a flask which the Countess claims she is unable to twist off. The lady does not evidence the slightest concern for the comfort of her servant.

The assorted guests at Gosford Park have come at the invitation of Sir William McCordle (Michael Gambon) and his wife Lady Sylvia (Kristine Scot Thomas) to partake in a shooting party. Adding to the mixture is Sir William’s cousin, English matinee idol Ivor Novello (this real-life movie star—also a composer, he wrote the popular WW1 song “Keep the Home Fires Burning” — is played by Jeremy Northam) and his American film producer friend Morris Weissman (Bob Balaban). The comments of the latter offer some enjoyable contrasts to the English mores and customs, as well as provide Altman with a means for poking fun at Hollywood through Weissman’s obsession with telephone calls to and from Hollywood associates. He also provides Maggie Smith, who has the lion’s share of wonderful lines, with the opportunity for a great put-down. He has come to do research for his next film “Charlie Chan in London.” While talking about it, he says that he does not want to give the plot away, to which the Countess replies, obviously meaning that no one in the room would stoop to such low-class entertainment, “Oh, don’t worry, we’ll never see it.”

The differences between the classes is shown by the contrasting pace of the two groups. The leisure class rise late and sit around in palatial rooms decked out in their finery, whereas below, the uniformed servants rush around even more quickly than in the American “The West Wing,” each attending to specific duties that must be performed at specific times. Also, there is a touching scene of contrast between the groups during the evening that Ivor Novello entertains the gathering by singing several of his songs at the piano (these were all chosen from the 250 songs written by the real Ivor). Although several of the younger ladies of the gentry enjoy and applaud his songs, most, led by the Countess, are bored, their applause very limp. During the last song, the Countess, trying to play a game of cards, surreptitiously discourages those around her so as not to encourage further singing. On the other hand, the servants can hardly believe their good fortune in hearing the great screen tenor in person. They hover outside doors and in the stairwells below in their eagerness to catch every note of the songs, no doubt feeding their fantasies of a better world in which they too could share in leisure and romance.

The murder does not take place until almost 90 minutes into the film, the victim being the one who most deserves it. Thus, there is little grief evoked among either those upstairs or those downstairs. Some of the servants soon reveal that they have great secrets to hide, several of them suffering from the murdered person’s long history of inflicting injustice upon the less powerful. Director Altman has fun poking fun at the old Scotland Yard mysteries by bringing in Inspector Thompson (Stephen Fry), a detective who makes Peter Seller’s Inspector Clouseau seem like Sherlock Holmes. It is his associate Constable Dexter (Ron Webster) who has to continually remind the bumbling detective not to touch or move the evidence. Although we learn who did it, we know that this detective never will—and yet we come to understand that a greater justice than humanity’s has nevertheless been served. Do not miss this film!

Reprinted from the Feb. 2002 issue of Visual Parables.

A mixture comedy of manners and social commentary, this who-dunnit is set in a posh English country estate.
Editor Rating ★★★★★5 out of 5
More Details