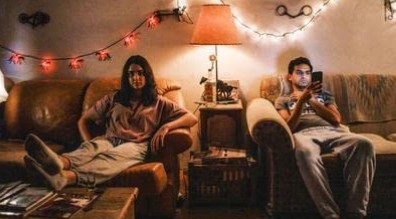 Director Roshan Sethi is also the co-writer (with star Karan Soni) of this romantic tale of two Americans, Ravi (Karan Soni) and Rita (Geraldine Viswanathan), whose Indian parents want to set them up for an arranged marriage. Their date is a picnic, for some reason arranged at a drained water reservoir, hardly a romantic setting. As they awkwardly converse, Rita says that she thought Ravi had said he did not drink alcoholic beverages. He defensively replies that he doesn’t, and then sees what she has spotted—his canned lemonade is “hard lemonade.”

However, before he can leave there is an emergency message sent out decreeing that everyone should quarantine in place. The two are trapped together, forced to put up with one another and awkward phone calls with their mothers. As they soften toward one another the thoroughly Americanized Rita confesses that she had been going out on the arranged dates solely to satisfy her mother and keep her monetary support for her apartment. He tells her, “You sounded like Siri [before],” and she replies, “You mean, I sounded subservient.”

There is a funny scene when she spikes Ravi’s drink with whiskey and he does stand-up comedy and then dances with her.

The film changes mood when the virus infects Rita and she is taken away to the hospital. He is not allowed to visit her. Alone and frightened, he gorges on her fried chicken, hitherto a No-No, and does something you don’t want your children to watch. He fields phone calls from her anxious mother, whose initial suspicion melds into warm appreciation for his concern for her daughter.

Will there be a future for this pair, or will Covid-19 leave Ravi with just a warm memory and a longing for what might have been? Check it out for yourself. It is great to see a love story set in a different culture, but one undergoing change when its members cross national boundaries.

An Americanized son & a daughter of parents back in India after an arranged but failed date are cooped up together due to Covid 19.
Editor Rating ★★★★★4 out of 5
More Details