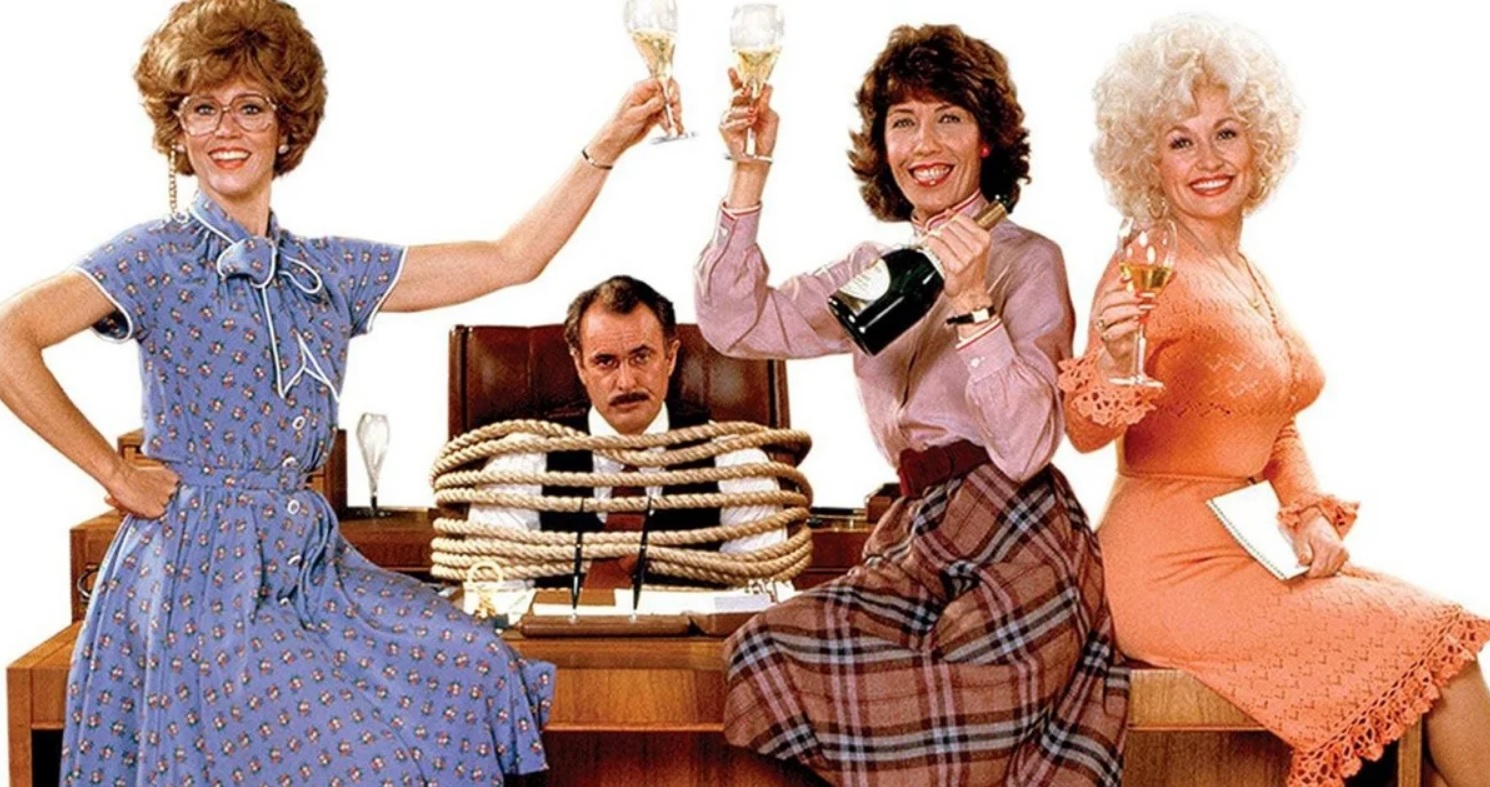 
Woe to him who builds his house by unrighteousness, and his upper rooms by injustice; who makes his neighbors work for nothing, and does not give them their wages


But Martha was distracted by her many tasks; so she came to him and asked, “Lord, do you not care that my sister has left me to do all the work by myself? Tell her then to help me.” But the Lord answered her, “Martha, Martha, you are worried and distracted by many things; there is need of only one thing. Mary has chosen the better part, which will not be taken away from her.”


The release of PBS’s Independent Lens excellent documentary 9to5: The Story of a Movement prompted this new look at the popular comedy that burst upon the scene in 1980. I reviewed it in a Catholic journal in 1981, but have no copy, so here is a fresh take on the classic that seems as fresh and right-on-target as ever.

It is hard to believe that 40 years have passed since this absurdist comedy drew audiences into the nation’s theaters. Director/co-writer Colin Higgins’ film might have been a comedy, but it dealt with a serious and widespread problem, the oppressive conditions under which millions of women worked at the beck and call of chauvinist men. Even the crazy fantasies and plot device in which three disgruntled women kidnap their boss grew out of the research conducted by co-star Jane Fonda with a group of members of the activist organization known as 9to5. Thus, even the film’s name, and then that of Dolly Parton’s lively theme song, is based in reality. As you will see in the documentary (reviewed elsewher), when Jane asked a group of office workers if they entertained fantasies of getting revenge for their mistreatment, all of them raised their hands.

The story begins with new hire Judy Bernly (Jane Fonda) being shown around the office by Violet Newstead (Lily Tomlin), the supervisor of the department. Judy has to work because her husband Dick had left her and run off with his secretary. Violet has worked with the firm longer than their boss, the arrogant Franklin Hart, Jr. (Dabney Coleman), but has consistently been passed over for promotions that have gone to less experienced men. Doralee Rhodes (Dolly Parton), Hart’s personal secretary, is happily married, but this does not stop Hart from trying to seduce her. He fails, but like so many sexist men, still brags about his imaginary conquest to other equally sexist executives. Word of this spreads among the female workers, who thereby shun Doralee, leaving the latter puzzled as to their unstated reason.

How Doralee joins up with the other two and one night shares a toke with them, thus inducing their hilarious fantasies, I will leave for you to discover. Their fantasies include: Judy as a hunter chasing their boss down in the office with a shotgun; Doralee sees herself as a cowgirl hogtying and sexually harassing Hart and then roasting him on a spit; Violet fantasizing that she is a Snow White poisoning his coffee and then pushing him out the window, her act releasing the chains of her fellow workers.

When the three return to the office, and thus in the movie to “reality,” what follows is just as crazy and bizarre as their fantasies—the kidnapping and imprisoning of the office tyrant while the three women take charge and initiate revolutionary changes at the office–  flexible work hours, equal pay for male and female employees, a job-sharing program, and for those who are parents, an onsite daycare center for children, the hiring of  disabled people, and even a treatment program for alcoholic workers. It was no accident that most of these were also the goals of the 9to5 Movement that Jane Fonda had studied!

There are a lot of crazy plot developments that include the women having to deal with a dead body; a husband believing his wife was being unfaithful; the funny Rube Goldberg-like means of keeping Hart a helpless captive in his own home while his wife was away on a cruise; the come-uppance of the office gossip; Hart breaking loose and claiming before the company head credit for the department’s increased productivity; and how the women are able to maneuver their way out of criminal charges until at last the office Hitler meets his just faith in far off South America.

Dolly Parton memorably captured the spirit of the 9to5 Movement in her song, with the chorus driving home the prophetic protest:

“Working 9 to 5, what a way to make a living
Barely gettin’ by, it’s all taking and no giving
They just use your mind and they never give you credit
It’s enough to drive you crazy if you let it
9 to 5, for service and devotion
You would think that I would deserve a fair promotion
Want to move ahead but the boss won’t seem to let me
I swear sometimes that man is out to get me…”

Neither Psalmist nor prophet could lodge a stronger protest against oppression than this sprightly song that reached the No. 1 spot on Billboard at the time. The ever inventive Ms. Parton made sure that listeners understand the milieu of her protest by incorporating the clacking sound of a typewriter to set the rhythm.

The filmmakers were wise in choosing comedy as the vehicle, as did the prophets at times. (See the attack on idolatry in Isaiah 44:9-20.) Some audiences cheered as well as laughed when Doralee learns why she is unpopular in the outer office and verbally attacks her boss after one more of his failed attempts at seduction:

Doralee: Look, I’ve got a gun out there in my purse. And up to now, I’ve been forgiving and forgetting because of the way I was brought up. But I’ll tell you one thing: If you ever say another word about me or make another indecent proposal, I’m gonna get that gun of mine… And I’m gonna change you from a rooster to a hen with one shot!

[calls back over her shoulder while storming out of the office]

Doralee Rhodes: DON’T THINK I CAN’T DO IT!

Even the most naïve viewers, after rooting for the three friends in the movie, might then awaken to similar wrongs committed in their workplaces. This comedic approach is less threatening, and thus can be more persuasive than a serious frontal attack on a wrong. Think of the many anti-authoritarian jokes that spread throughout eastern Europe before the fall of the Soviet Union. I know that the scene in Bombshell in which Fox CEO Roger Ailes in his private office demands that a female employee pull up her already short skirt (mandated) to reveal more of her legs and even her panties is chilling and repulsive, but I think Dolly’s scene with her boss will linger longer in the viewer’s memory. (Though I applaud both films as important prophetic indictments of male chauvinism!)

So, by all means watch the documentary 9to5: The Story of a Movement, and then treat yourself to this screwball comedy with the same message. The end of the documentary will sober you up to the realization that many offices have not yet reached the lofty goals set forth in the two films. They remind me of the part of the last line in a hymn I love, “This Is My Father’s World:”

“This is my Father’s world; Oh, let me ne’er forget

That though the wrong seems oft so strong;

God is the Ruler yet.

This is my Father’s world; The battle is not done…”

We can hope that with the advent of the #MeToo Movement, the 9to5 Movement will again be as formidable as it once was. These two films can certainly help that come about if enough of us watch and spread their message of equality. As people of faith we can say with certainty by the way that Jesus dealt with Martha’s request to send her sister Mary back to the kitchen–remember was sitting with the disciples listening to Jesus–which side he would be on in the continuing fight for gender equality!

This review will be in the February 2021 issue of VP along with a set of questions for reflection and/or discussion. If you have found reviews on this site helpful, please consider purchasing a subscription or individual issue in The Store.

An absurdist comedy deals with a real & widespread problem, the unjust treatment of female office employees by their misogynist male bosses, a film inspired by the real life 9to5 movement.
Editor Rating ★★★★★5 out of 5
More Details