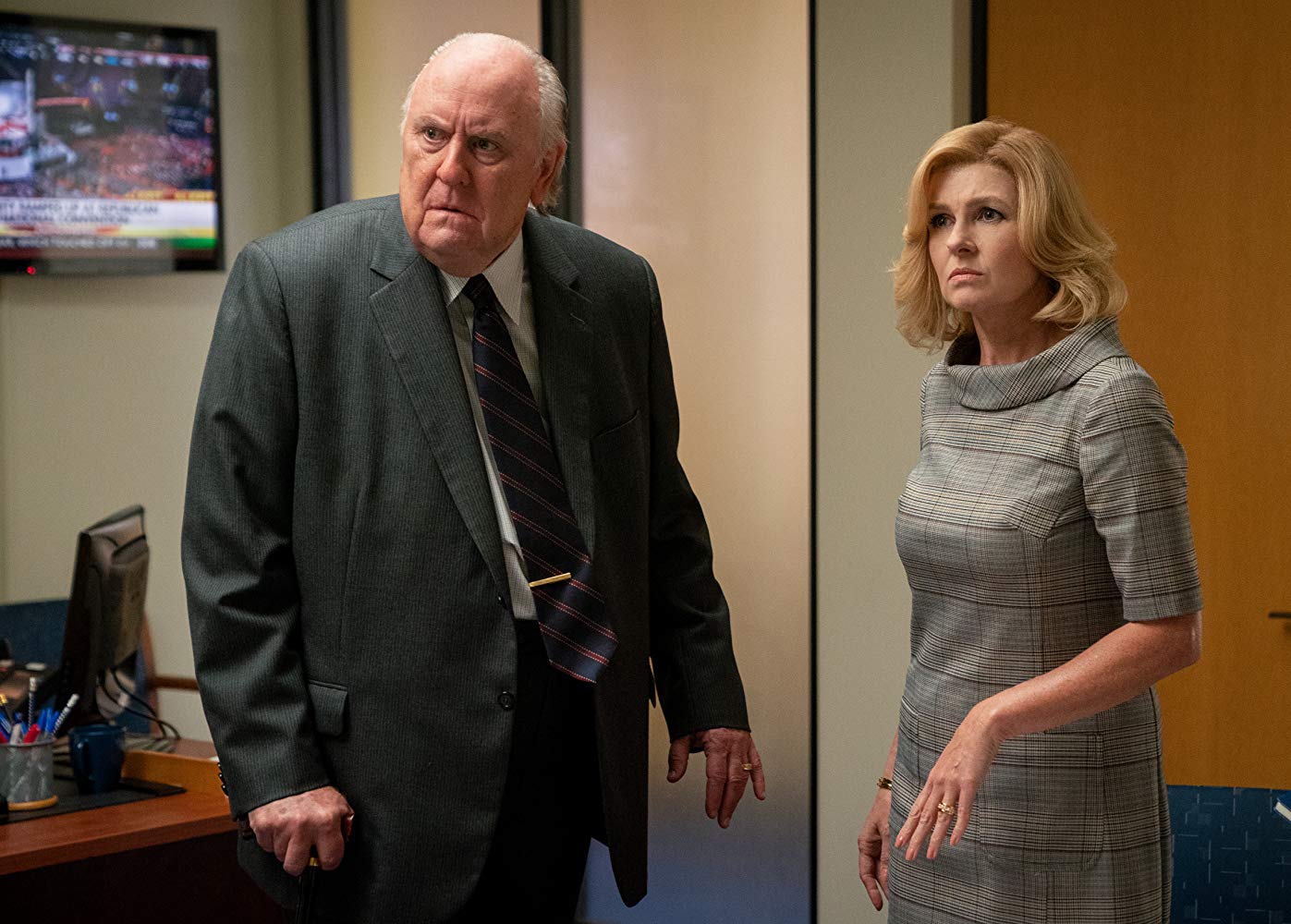 I desire, then, that in every place the men should pray, lifting up holy hands without anger or argument; also that the women should dress themselves modestly and decently in suitable clothing, not with their hair braided, or with gold, pearls, or expensive clothes, but with good works, as is proper for women who profess reverence for God.  Let a woman learn in silence with full submission.  I permit no woman to teach or to have authority over a man; she is to keep silent.

Along with such commands that slaves should obey their masters, the above passage on women is as culture and time bound as can be. Roger Ailes of Fox News might have agreed with the New Testament epistle writers that women must be subordinate to men, but he veered off from the strictures dictating that they should dress modestly and eschew expensive adornments. As shown in director Jay Roach and scriptwriter Charles Randolph’s fast-paced film, Ailes, convincingly portrayed by John Lithgow whose skillfully applied prosthetic makeup make him the mirror image of the aged cable mogul, liked his women in short, tight dresses and their hair and faces perfectly made up. Even the glass-fronted desks were his design, so that the women’s legs would be on display. And I do mean “his” women, as he made each beholden to him if she were to get on the air or to advance in her career. The film is an account of three women—two real-life anchors who are named, and one a fictional producer who is a composite of several Fox women.

The first whom we meet is Megyn Kelly (Charlize Theron), very nervous as she prepares to be one of the co-moderators of the Republican Presidential candidate debates prior to the 2016 election. She believes that Trump has a problem with women that should be aired nationally. Then as new producer Kayla Pospisil (Margot Robbie) is led around the Fox establishment, she is informed about Fox’s approach to news, the latter part being, “Ask yourself what would scare your grandmother and p-o your grandfather, and that’s a Fox news story.”

Contrary to her expectations, her boss is supportive, he assuring her that controversy is good for ratings. Later she pulls back from her opposition by conducting an interview with Trump, pitching him soft ball questions. Her husband is so disappointed that he calls her on her retreat.

Roger Ailes treats Fox star Gretchen Carlson (Nicole Kidman) the opposite of that of Megyn. Carlson has been rebelling against the Fox image of the perfectly made-up woman by appearing on camera minus makeup and talking about it. Ailes insults her, telling her that no one (meaning males like himself) is interested in her as she is or in talking about such issues. Soon he is having her escorted from the building, declaring ““You’re sexy, but you’re too much work.” She is let go with a large payment but is required to sign a nondisclosure agreement. In spite of this, she meets with two lawyers about suing—not Fox, but Ailes himself—for firing her because of her refusal to have sex with him. They talk over the dangers, during which she assures them that she will be joined by other women upon whom the predator as preyed.

Her suit is half of the double-meaning title, Carlson’s boldness rocking the entire organization. But her confidence that she will not have to fight alone flags when no one else comes forward. Back at Fox the ambitious Kayla Pospisil, who joined Fox because she was an evangelical who saw the organization as a place where she could forward her beliefs, is becoming disillusioned, the process climaxing when she at last scores (she thinks) a one-on-one meeting with the Boss. She sees this as her chance to make her case to work in front of the camera.

This scene is the most chilling in the film, departing from the dark comedic treatment followed mostly to this point. Ailes gives her his usual spiel about loyalty, which includes, “To get ahead you have to give a little head,” and “If you want to play with the big boys you have to lay with the big boys.” As a Fox girl she must find a way to show her loyalty. As we have seen him do before, he asks Kayla to stand up, walk, and twirl around. She grudgingly accommodates him, but he does not stop there. He asks her to pull up her already short miniskirt. More. A little more, until a portion of her underpants are showing. This should become a classic take on a practice long condemned by feminists, the reduction of a woman from a person to a thing. Just as African American slaves were treated as cattle when being sold, so Kayla is treated as a thing, a sex toy designed to bring pleasure to a male–and an important part of that design is to make her feel that way about herself. Totally humiliated, at least one of her cheeks is tear-streaked as she walks out of the office.

Kayla complains to Megyn, who answers, “It is no one’s job to protect you.” Now seeing a larger picture, Kayla answers, “It’s all our jobs.” As the days go by and Megyn, perhaps influenced by Roger’s supporting and encouraging her when Trump and the public had been scorning her,

ignores the controversy during her program. Pressure mounts on her from both sides. During a conversation with Kayla, who has decided to join in Gretchen’s suit, Megyn reveals her own dark encounter with Ailes. Kayla is upset that Megyn does not add her voice to those challenging Ailes, confronting her with, “Did you think what your silence would mean for us? For all of us?”

Liberals who know of the many snarky comments of Megyn and Gretchen might think the film is too much of a white wash of the two in order to gain our sympathy for the pair—the real women were not the long-suffering innocents in the fictional tale of female empowerment, 9 to 5. (Has it really been almost 40 years since the release of that feminist film?!) Whether or not this is the case, the predatory tactics of Roger Ailes are enough to convince us of the justness of their cause. Even Aisles’ conservative boss, Rupert Murdoch (Malcolm McDowell), who benefited immensely (billions of dollars!) from Ailes profitable management of Fox News, was led to fire his underling.

The film can be seen as a visual parable of the misuse of power, a persistent theme throughout the Bible. In the Hebrew Scriptures the prophet Samuel warned the people of Israel that if they were to choose a king, he would misuse his power, but they persisted, and so he gave in to their plea that he choose a man worthy to rule over them and provide the protective security they desired. (See 1 Samuel 8.) As he had predicted, most misused their royal power, even the king judged the best, King David obtaining the married wife of a loyal subject by deceit and murder. In the Scriptures power is seen to be used for the benefit of others, not for oneself (note that the three temptations faced by Jesus are temptations to benefit himself, rather than others). Like King Saul, Roger Ailes without doubt did not start out as the villain depicted in the film. A smart operator, he built a media empire, and apparently once had loved his wife enough that she remained silent about his sexual improprieties, though living apart from during the last year of his life. He was no king, but as a media mogul he possessed great power, misused it, demanding the women at Fox, show their “loyalty” in order to advance their careers, and paid the price when his misdeeds were brought to light.

This is not a film to “enjoy,” but it is a fascinating one, filled with so many real-life characters that viewers could play the game “Name that Celebrity” as it unfolds. There is Rudy Giuliani (Richard Kind), seemingly everybody’s lawyer; Ailes’ lawyer Susan Estrich (Allison Janney); Bill O’Reilly (Kevin Dorff), popular Fox host who himself ran afoul of sexual misconduct charges; ‘Fox & Friends’ co-host Ainsley Earhardt (Alice Eve); Chris Wallace (Marc Evan Jackson); Geraldo Rivera (Tony Plana); and Megyn’s husband Doug brunt (Mark Duplass). I am sure that if you are a Fox News fan, there are still more names you will recognize. Quite a cast for a story that needs to be told—and seen.

The story of 3 women sexually harassed by Roger Ailes at Fox News and their lawsuit that forced him to leave.
Editor Rating ★★★★★4 out of 5
More Details