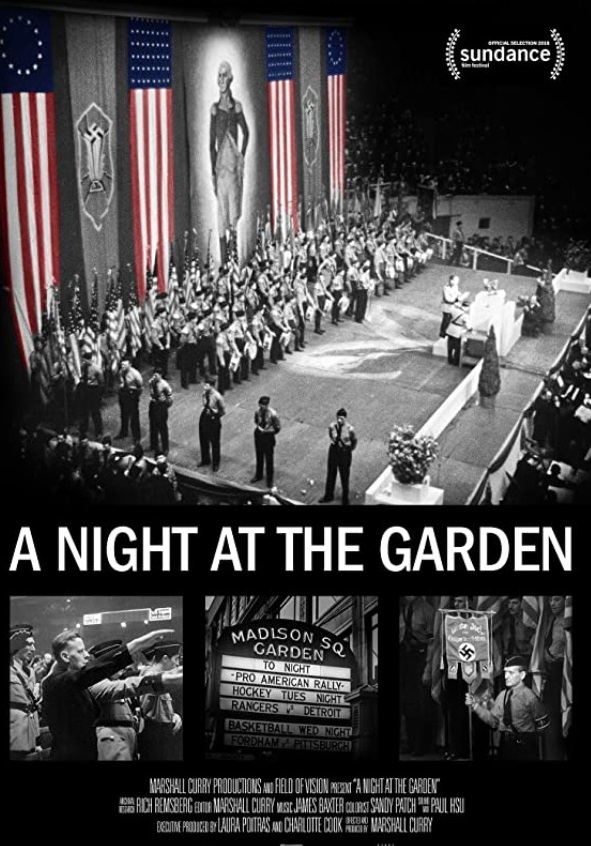 God, get me out of here, away from this evil;
protect me from these vicious people.
All they do is think up new ways to be bad;
they spend their days plotting war games.
They practice the sharp rhetoric of hate and hurt,
speak venomous words that maim and kill.

These troublemakers all around me—
let them drown in their own verbal poison.
Let God pile hellfire on them,
let him bury them alive in crevasses!
These loudmouths—
don’t let them be taken seriously;
These savages—
let the Devil hunt them down! 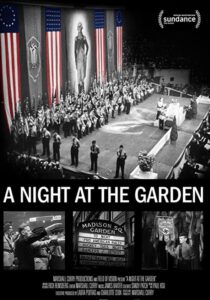 This short documentary is as chilling as you are likely to see, chronicling a public event taking place in 1939 at NYC’s Madison Square Gardens, and yet strikingly contemporary, because it reminds us that the spirit of fascism lives on. It was nominated for a Short Documentary at the 2019 Oscars.  Marshall Curry has rounded up the existing fragments of old news footage and edited them into this short film. He decided to let the images speak for themselves rather than add descriptive narrative or interviews with historians and experts explaining the happenings in that huge auditorium.

In the Q&A section of the film’s Facebook posting Curry said he was inspired by the racist events at Charlottesville to turn the edited footage into a film for wide release. “It really illustrated that the tactics of demagogues have been the same throughout the ages. They attack the press, using sarcasm and humor. They tell their followers that they are the true Americans (or Germans or Spartans or…). And they encourage their followers to ‘take their country back’ from whatever minority group has ruined it.”

The stagers of the event obviously took their cues from such Nazi rallies as the famous one at Nuremberg. Twenty plus thousand spectators face a stage at the center of which is a giant full length portrait of George Washington (the event was held on his birthday) flanked by four huge American flag banners. Between the banners were two more banners emblazoned with a swastika. A procession of flag carriers in Nazi uniforms march down two aisles to the beat of a corps of drummers on the stage. They are followed by uniformed Bund members who take their seats near the front. The audience gives the stiff-armed salute as the speaker begins the proceedings. 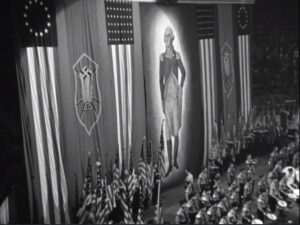 Be sure to click onto the media tab so that you can then click onto the WNYC Archives link to find a two hour recording of the speeches and a long, informative article about the event and some of its participants, including the 26-year-old Isadore Greenbaum who tried to interrupt speaker Fritz Kuhn but was quickly surrounded by Bund guards and beaten until the police arrived to rescue him and thrust him off the stage. Notice the satisfied look on Kuhn’s face and the crowd’s roar of approval of the man’s rough treatment. Saddest is the glimpse we get of a uniformed boy on stage who dances a little jig and rubs his hands together in glee over what he has just witnessed—thus are young minds poisoned with the hatred disseminated by their elders, Kuhn in his speech speaking of a Gentile land free from Jews.

The short films ends with irony and another chill. The irony is the singing of the “Star Spangled Banner” with its phrase “the land of the free “at a rally dedicated to the destruction of freedom The chill is in the last frame when the silhouette of an arm stretched out in the stiff-armed salute appears, the saluter apparently standing next to the cameraman. The only added narrative is the end title informing us of events in Germany and Europe that followed.

As sad and chilling as the film is, revealing that current Nazi talk threatening Jews is not just an aberration but a dark thread running alongside White racism in our national history, the inclusion of the protester is a bright spot in a dark picture. Isadore Greenbaum’s act against hate speech reminds us that there have always been protesters against tyranny. At that time the American Jewish Committee said they were opposed to the Bund and its anti-democratic values, but they were also opposed of any attempt to prevent them from speaking. However, Greenbaum explained to his judge, “I went down to the Garden without any intention of interrupting. But being that they talked so much against my religion and there was so much persecution I lost my head, and I felt it was my duty to talk.” The judge asked, “Don’t you realize that innocent people might have been killed?” Greenbaum responded, “Do you realize that plenty of Jewish people might be killed with their persecution up there?”

Director Curry also quotes from Methodist minister Halford E. Luccock’s sermon preached in September 1938 at Riverside Church that includes the famous line, “When and if fascism comes to America it will not be labeled ‘made in Germany’; it will not be marked with a swastika; it will not even be called fascism; it will be called, of course, ‘Americanism’.” This observation, probably made in the light of Sinclair Lewis’s cautionary novel about the rise of an American dictator, was so striking that the New York Times the next day carried a report of the sermon under the title “ “Disguised Fascism Seen As A Menace.” Does the 81-year-old quote seem dated?

Images (c) by Field of Vision

With no commentary Marshall Curry lets his edited together news clips tell the story of the pro-Nazi rally staged by the American Bund at Madison Gardens in 1939.
Editor Rating ★★★★★5 out of 5
More Details