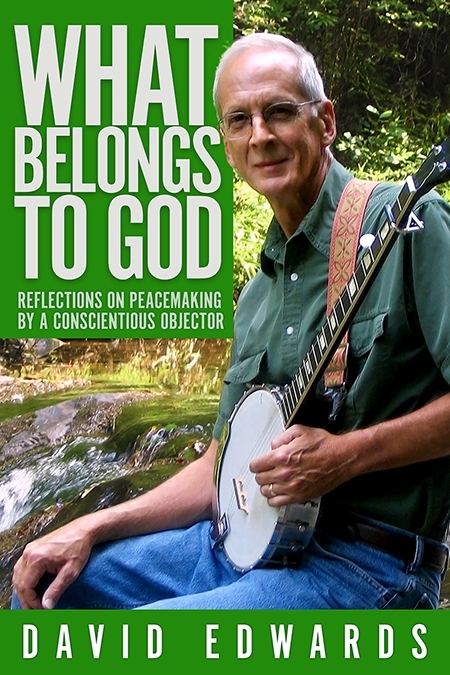 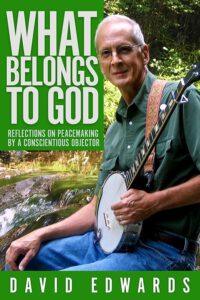 The publication of peacemaker/folksong writer David Edwards’ book sadly comes after his death, but his memoir will live on, challenging fellow Christians to take a closer look at what the Scriptures teach about retaliation and nonviolence. Even though we share the same publisher, Readthe Spirit, and are both committed to peace and justice issues, I was not aware of David’s important ministry until given the opportunity to read his book. Thus I am grateful that his family and friends pushed to get the book into print. As militarism and narrow nationalism attract millions of supporters in this country and around the world, his staunch argument for peacemaking, for returning love for hatred, gentleness for violence, is more important than ever.

In  his short book Edwards shares his Biblical-based decisions and their effects on his life starting with his filing for Conscientious Objector status in 1970. The Vietnam War was at its height, and he wanted no part of that violent affair. Although he could have relied on his theological studies for draft exemption, Edwards wanted to express openly his opposition by obtaining CO status. He had grown up imbibing the teachings of Jesus concerning nonviolence, and so he served his two years of alternative service at a children’s hospital in Boston. He then went to Lexington Theological Seminary and served churches in  Kentucky, Indiana, and Virginia. As a conscientious objector he quickly discovered what a minority he was in, even in the church that professed to follow Christ. Here is what he observes at the beginning of his book:

“In the culture of the United Sates, joining the military forces is taken for granted as a morally unquestionable matter. This has been true from the time of the invasion and conquering of North America by white Europeans to the present day. Military service continues to be touted as the highest form of service to one’s country, if not to humanity. Churches, pacifist groups and individuals opposing participation in the military always have been relatively small in number and visibility. Though generally tolerated, they also have been met with hostility, and in some cases, violence. We are increasingly a nationalistic and militaristic culture within which the only positive moral response to military enlistment presented to young people is to join up and do one’s duty.”

The author takes us not on a journey of his life but also one through Scripture, showing clearly how so many readers have been led astray by the accounts of violence in it, such as the supposed commands of God that the Hebrews kill even the women and children of their enemies. Several times he visits the story of Cain and Abel and what it means to be a brother’s brother and not his keeper–and also what it means to kill.

David Edwards was not only a pastor who preached and wrote about nonviolence, but he also sang the way of peace. He wrote and sang his faith to adults and children, leaving a tuneful legacy to us all. The portal to his melodious treasure trove is www.whatbelongstogod.com. He, and in some cases with a children’s choir, invites us to “Care for the Earth.” His love for God’s Earth is evident also in a song about “Bill the Bullfrog,” “Dragonfly Song,” and  “Clouds,” all written for children. While he was driving through Blue Grass country to his church, he was inspired to set the Nativity story in Kentucky, “Christmastime is Near” being the result.  You can hear these and many more, including his versions of some Psalms and chants on this site. And you who musicians will welcome the free pdf downloads, for either guitar or piano.

Edwards’ wife Kaye makes it easy to explore her late husband’s thought by teaming up with Methodist Rev. Jason C. Stanley to produce a study guide that incorporates several of the author’s songs. If a retreat is not feasible, then they suggest that the material can be covered in a series of evening sessions .

After reading this inspiring book and listening to about a dozen of Edwards songs, the words of another songwriter kept welling up in my mind, those of the first verse of New Zealand’s Colin Gibson:

He came singing love and he lived singing love;
he died, singing love. He arose in silence.
For the love to go on we must make it our song:
you and I be the singers.

Gibson, of course was referring to Jesus of Nazareth, but they could also be applied to David Livingston Edwards as well. Even the assertion that “he arose in silence,” for surely this creative pastor/songwriter will be among those rising up on that great day of resurrection yet to come. And maybe one of his will be among the songs that will be sung in celebration.