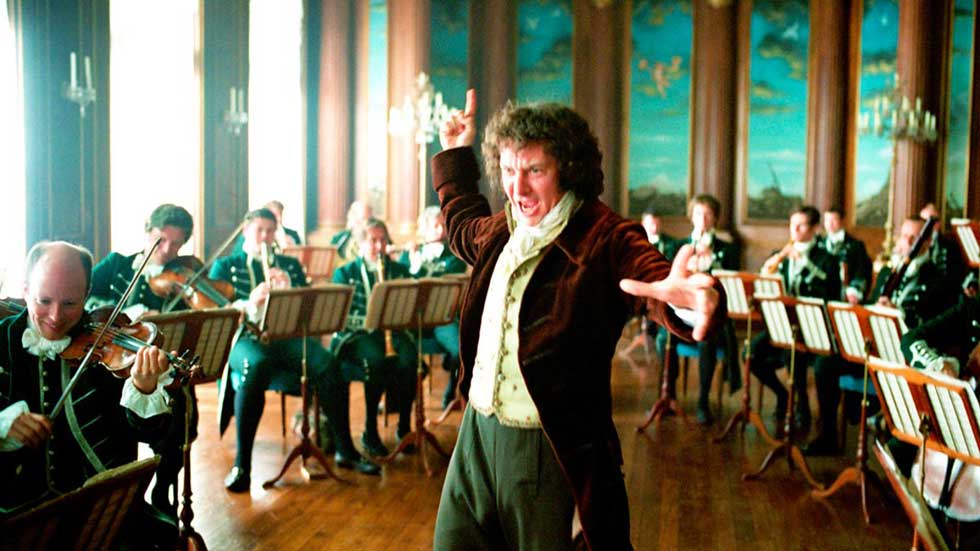 ...and you shall proclaim liberty throughout the land to all its inhabitants.

On June 9, 1804, Ludwig van Beethoven demonstrated that some people preferred the old wine in its old wineskins to the new. The occasion, the debut of his Third Symphony, “Bonaparte,” to a private audience in the Vienna palace of his patron  Prince Lobkowitz is regarded as the end of the Classical era of music and the beginning of the Romantic era. Director Simon Cellan Jones and writer Nick Dear have captured the excitement and wonder of the event in this BBC TV production that seems like a combination of biography with music video. It might well lead to a new appreciation of a classic some 200 years old—it certainly did for me!

I have seen lots of film biographies of composers in which we hear portions of the works that made them famous. The key word is “portions,” because in this film the ENTIRE 3rd Symphony is played—that’s some 50 minutes of music! Actually longer, because the maestro stops the orchestra after it begins so listlessly; and then in a movement when the horns come in, Beethoven’s pupil and companion Ferdinand Ries (Leo Bill) interrupts because he thinks the horns came in too early. Beethoven admonishes him, declaring it was played as he intended, and the orchestra picks up at that point and goes on—although the last two movements are put off until after a lunch break.

During this lunchbreak we see the sad outcome of the composer’s lengthy period of trying to win the heart of Countess Josephine Deym (Claire Skinner). He had known her and her sister for many years as her music teacher, but her widowed mother, need of money, married her off to a much older man. Beethoven continued as her teacher. The mother of three infants, Josephine was pregnant with the fourth when her husband died suddenly. All through this period he continued to visit her, and there are fifteen love letters extant that reveal his love for her. During their lunch-break conversation Josephine, ever the practical woman, discuss her suitor’s lack of finances, but her major reason for turning him down is the law demanding that her children be taken from her should she marry a commoner. Thus chastened, Beethoven returns to the salon for the remainder of his symphony. Though her rejection by no means ended their relationship, the pair would never be able to marry.

The fluid camera moves around and over the members of the orchestra (performed by the Orchestre Revolutionaire et Romantique), giving us the feeling of being in the midst of the players. The editing is spot on, with camera coming in for close-ups and medium shots of the horn players or the cellists or violinists at the appropriate moment in the score.

Some of the audience sits, but many stand and walk around or even through the orchestra, which is seated at floor level. Prince Lobkowitz (Jack Davenport), the host is thrilled by the unorthodox composition, whereas his snooty guest Count Dietrichstein (Tim Piggot-Smith), who considers himself a music expert, is upset by what he considers its chaotic format. A senior footman is heard to complain of its length, saying to another servant that Haydn, considered then as the king of the symphony, would have been finished by now—and Beethoven’s was not even half finished at this point. Beethoven himself, convincingly played by Ian Hart, does not remain at the conductor’s place, but wanders around the room at times. At one point, which I cannot recall exactly, the composer realizes he is going deaf. What a blow for a proud man whose profession is based on shaping the sounds that we hear!

There are occasional flashbacks to Beethoven walking with Ries in the country in which the maestro’s love of nature is demonstrated. In another, which comes near  the end of the film, Beethoven is in a tavern when Ries brings word that their hero Napoleon Bonaparte has declared himself Emperor of France. This so infuriates the socialist-leaning composer that he takes the first page of Eroica, which bore his dedication to Bonaparte, and tears it up.

It is debatable as to whether or not the great composer Haydn (Frank Finlay) was present or not at the debut of this public rehearsal. Their relationship began in 1790 and again in 1792 when the older composer was going to and then returning from his triumphant stay in England and the two briefly met. When Beethoven showed Haydn in 1792 some of his compositions, the latter took him on as a student. However, the maestro was so overloaded with work that he was not able to devote much time to his student. He also criticized one of his works, which did not sit down well with Beethoven’s rebellious spirit. Still, to outer appearances, their relationship was respectful. His comment at the end of the performance, “Everything is different from today,” is based on fact, though not the circumstances of its utterance.

Haydn’s observance, taken along with the positive and negative responses of various characters, is a good example of what Jesus meant in his old wineskins comment. Thus the bringing in of Haydn and his observation is a good dramatic  device that highlights the passing of an old age–that of Classicism–and the commencement of a new era–Romanticism.

In deciding to film the entire symphony, the filmmakers apparently were willing to sacrifice biographical details for the symphony and the occasion of its first performance, leaving it up to the audience to round out its knowledge of the composer. This is easy to do, so I have no quarrel with the filmmakers.  (One does have to allow dramatic license to the absurdity of having the orchestra play all but the opening measures flawlessly after just receiving their copies of the score!)

Watching this film is as if I were in a concert hall awaiting the symphony’s performance and the extensive program notes came to life. What this film gives is a sublime experience of not just listening to, but also seeing, a masterpiece. I have always loved this symphony, and now love it even more. I think you will too.

In depicting the first private performance of Beethoven's great 3rd Symphony, the characters interact as the orchestra plays the entire work.
Editor Rating ★★★★★5 out of 5
More Details