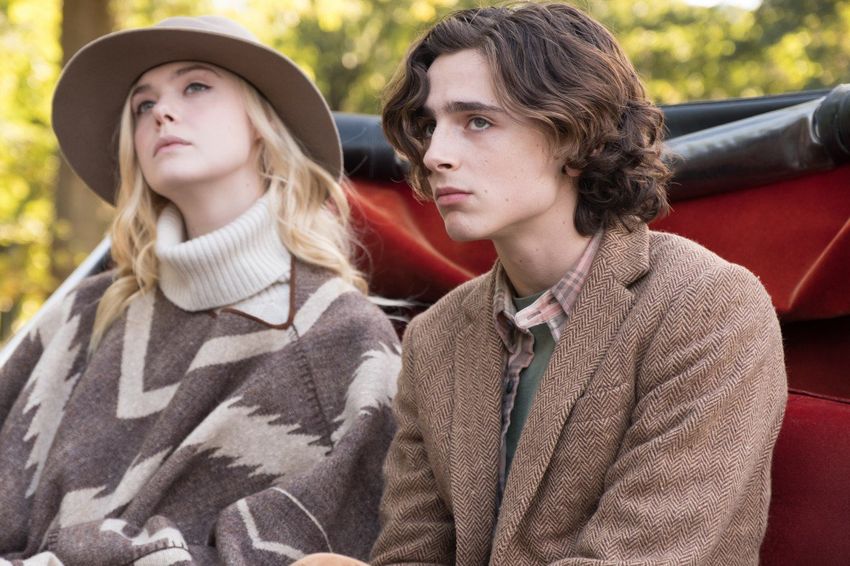 Woody Allen returns again to his familiar Manhattan haunts, so nothing new, other than the opportunity to enjoy Elle Fanning as a reporter for her upstate New York college newspaper and Timothée Chalamet as a suitable Allen stand-in, plus one more attraction to be mentioned later.

The ultra-naïve Ashleigh Enright (Fanning) has scored an interview for her college paper with jaded A-list director Rolland Pollard (Liev Shreiber) who offers her a scoop about his latest troubled production. Ashleigh ducks out on the romantic luncheon Gatsby (Chalamet).This is too golden an opportunity to turn down! This leads to time with Pollard’s screenwriter, Ted (Jude Law), who turns out to be a gentleman. Not so Francisco Vega (Diego Luna) dashing movie star who woos and beds her down. There are other developments, the most important being Gatsby’s encounter with Shannon (Selena Gomez), the younger sister of his ex-girlfriend, making a student film. Learning that Ashleigh is from Tucson, she snarkily asks, “What do you guys talk about? Cactus?”

This is about as much as I want to write about this frothy film except to mention an enjoyable scene late in the film. It features the brief but smart monologue by Tony Award-winning Cherry Jones* as Gatsby’s mother, who certainly proves herself as capable as ever in making a supporting character memorable. For me, seeing her name in the cast would have motivated me to watch the film.

I have often ended a review of a Woody Allen post golden era film (1970s & 80s) with the observation that even a mediocre Allen film is superior to the majority of junk posing as a comedy, and so is this one.

*See my article about her in my blog “An Evening With A Broadway/Film Actress.”

A light comedy about a college reporter interviewing movie folk in NYC while her boyfriend hangs out & meets a cute student filmmaker.
Editor Rating ★★★★★3.5 out of 5
More Details