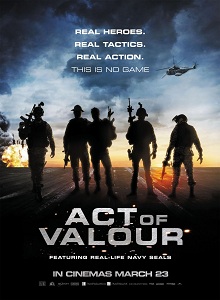 Wise warriors are mightier than strong ones,
and those who have knowledge than those who have strength;
for by wise guidance you can wage your war,
and in abundance of counsellors there is victory .
Proverbs 23:5-6

Two are better than one, because they have a good reward for their toil. For if they fall, one will lift up the other; but woe to one who is alone and falls and does not have another to help. Again, if two lie together, they keep warm; but how can one keep warm alone? And though one might prevail against another, two will withstand one. A threefold cord is not quickly broken.
Ecclesiastes 4:9-12
When I first saw this engrossing film I thought that it would make a powerful recruiting tool for the Armed Services. Since then I have learned that that is exactly how Mike McCoy and Scott Waugh’s film began–it was as a seven-minute training film for the Special Warfare Combatant-Craft Crewmen. Seeing the dramatic possibilities in their footage, the partners expanded it with a fictional plot, but used the same actual SEALs rather than actors for members of the team.
This explains the authenticism of the combat sequences which take up most of the screen time–unlike actors, they needed no further training to use the high tech surveilance systems and weapons used in the film. These guys are the real thing. We are given in the opening segment showing the soldiers interacting with their wives and families just enough information–one of them is an eager expectant father–so that wecare for what happens to them in the intense firefights with terrorists and drug dealers. However, there are not enough deatils of any of the participants so that they emerge as full-blooded persons. As some critics have observed, this film is just a leg above a combat video game.
The civilians back home and the villains, who threaten Americans by sending via Mexico to the States 18 suicide bombers equipped with vests filled with ball bearings designed to kill hundreds of people at a time, are played by 7 actors. How the SEALs stake out and take out the latter makes for spell-binding viewing, though after the long sequence involving three connected missions–the rescue of a female CIA agent being tortured, the capture of the terrorist leader, and the pursuit of the suicide terrorists being smuggled into southern California–a viewer is left with plenty of questions to ponder.
The scope of the film is deliberately limited to the Navy Seals. Isn’t it also important to see the larger picture of what are the reasons for terrorists hating the USA? The filmmakers claim no political agenda–they just want to honor our fighters who are risking their lives–but isn’t leaving out the larger picture in itself an agenda, albeit an unconscious one? The film raises for people of faith other issues as well, including that of how one holds the teachings of Christ in the Sermon on the Mount in tension with combating terrorists. There is no easy answer to this and other questions such movies as this one raises. Do you see the danger that such films always pose the danger of inspiring viewers to become unthinking wavers of the flag?
For reflection/Discussion
1. If you have a favorite character, which one is it–and why? What qualities do the soldiers exhibit? Compare the way in which the soldiers and the villains are portrayed.
2. How does the film show the importance of team work? Note that one of the men refers, consciously or not, to the Ecclesiastes passage.
3. When one of the men sacrifices his life for the team, how did this bear out their commitment to one another?
4. Do you think we should see the larger picture, or are such films as this, focusing just on the valor of the combatants enough? Do you believe that it is important to try to understand the motives of terrorist, and if so, why? Or is it enough just to say “They attack us because they hate us, or hate democracy? Can you think of any reasons why some might hate us so passionately?
5. How can we avoid the mistakes of the Sixties and honor the troops, even while questioning the war(s) in which they fight?
6. Do you see ways of honoring Jesus’ teachings in regard to enemies and our policy and use of violence in resisting the attacks of others? For instance, how did you feel, and what did you believe, concerning our President’s announcing the death of Osama bin Laden?
Relativity Media