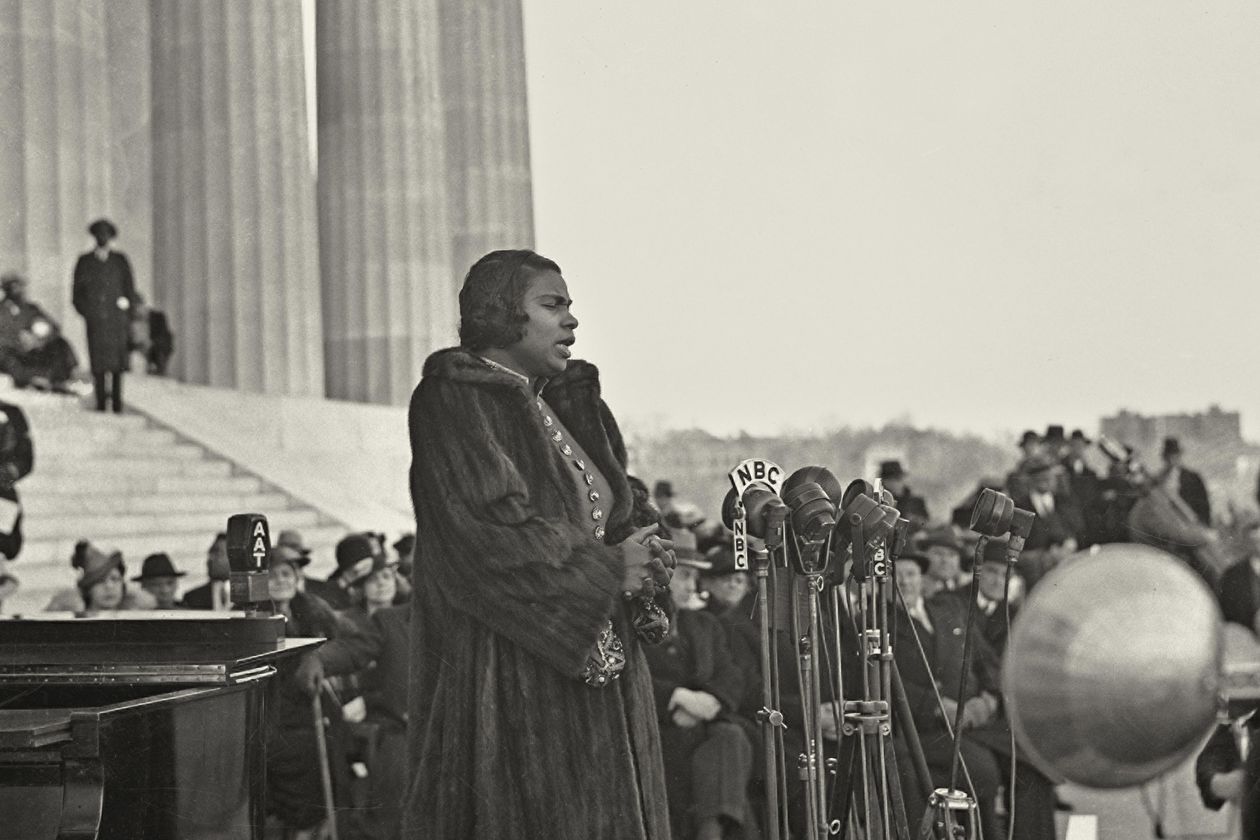 … you shall proclaim liberty throughout the land to all its inhabitants…


God is upon me, because the Lord has anointed me; he has sent me to bring good news to the oppressed, to bind up the brokenhearted, to proclaim liberty to the captives, and release to the prisoner

This episode of American Experience, directed by Rob Rapely and aired on PBS in February 2021, centers on the great singer Marian Anderson, but is just as much about the grip that Jim Crow had on America in 1939. Singer/actor Renee Goldsberry (Hamilton) serves as narrator. Through archival footage, photos, and comments by  scholars Alisha Lola Jones and Kira Thurman, singer Angela Brown, and historians Lucy Caplan and Adriane Lentz-Smith, we are conducted through the great events of the diva’s life, beginning with her birth in Philadelphia in 1897.

Even as a girl Marion stood out for her remarkable voice, singing with her church choir and as she grew older giving recitals all around Philadelphia. Church folk raised money for her to study under a famous voice coach, and he was so impressed by her that he daughter her for another year free of charge. But her talent counted for nothing to the racist members of the Philadelphia Musical Academy, and so her application was denied. She took private lessons and traveled to Europe on a scholarship, studying in Berlin. When she sang in Scandinavia, the people fell in love with her voice.

Despite the danger from Nazi thugs, who had chased a Black man out of the Salzburg, Marian traveled to that city in 1935. She was denied a place on the official Festival program, but a large crowd filled with notables came to her concert. This is where the man considered the greatest conductor of the age, Arturo Toscanini, made his famous statement about her, “What I heard today one is privileged to hear only once in 100 years.” Returning to America in triumph, where she was often billed as  the “Voice of the Century,” she still found most venues closed to her, and so she toured singing in African American churches and colleges.

In 1939 came the event that would enshrine the diva forever in the pantheon of heroes of the CR Movement, even though she herself turned aside the role of activist. The D.A.R. owners of Constitution Hall, refused permission for her to sing there because of their stipulation that only white artists could perform there. Walter White, head of the N.A.A.C.P., was in charge of the benefit concert, and sought to force a change in the policy. When he appealed to Eleanor Roosevelt, a member of the group, she at first turned him down, but as the controversy continued, changed her mind. In her popular syndicated column she announced that she was resigning because of the D.A.R.’s bigotry. Many other members followed her example.

Still the grand dames would not budge, so White using his network of D.C. connections, appealed for help from President Roosevelt and Interior Secretary Harold Ickes. The President is reported to have said, “She can sing from the top of the Washington Monument if she wants to.” But apparently White thought the Lincoln memorial more appropriate or maybe practical. And here is inserted a most interesting sequence on the racism surrounding the building of the memorial to the Great Emancipator a generation earlier. In the Twenties the Southern view of the Civil War and of Reconstruction held sway in which the “War Between the States” was a matter of states rights and succession, not of slavery. At the 1922 dedication just one Black person was invited to speak, and the white censor cut out his mention of Lincoln freeing the slaves!

In the vintage clip from Ms. Anderson’s concert on Easter Sunday, April 9, 1939 one cannot but help but notice the irony in her beginning the concert with the song “America,” with “sweet land of liberty” in its very first line. And yet, despite the D.A.R., there she is singing, not just to the few thousands who could have squeezed into Constitution Hall, but to tens of thousands of adoring fans, some of whom might not have been able to have afforded a ticket to the indoor event. An added bonus was that the concert was broadcast nationally.

Of course, there is more to Marian Anderson’s long productive life–she lived to be 96, dying in 1993. There is the story of  Orpheus H. “King” Fisher, who proposed marriage to her when she was a teenager but had to wait decades until his dream could be fulfilled. There are stories of her many other performances, including one at Constitution Hall itself in 1943 and, of course, her singing at the 1963 March on Washington where Dr. King gave his memorable speech. And eight years before that there was her performance in Verdi’s opera “Un ballo in maschera” at the Metropolitan Opera, the first person of color to breach its color line;  her concerts entertaining soldiers during wartime, and her service as a Good Will Ambassador for the U.S.– hers was an incredibly full life, one which this documentary honors in memorable ways.

Concert singer Marian Anderson's story, from her childhood church singing through her rejection that led to her famous Lincoln Memorial Concert through the Civil Rights era.
Editor Rating ★★★★★5 out of 5
More Details