Skip to content
Rated PG.  Our Ratings: V -1; L -2; S/N 01.  Running time: 1 hour  37 min.
Are not five sparrows sold for two pennies? Yet not one of them is forgotten by God.
Indeed, the very hairs of your head are all numbered. Don’t be afraid; you are worth
more than many sparrows. 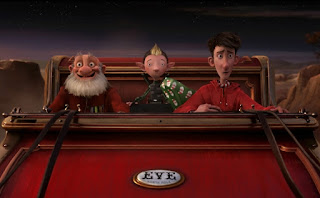 Grandpa Santa, the Elf Bryony, and Arthur set out in the obsolete sleigh.
© 2011 Columbia Pictures

The delightful folks who infused such quirky humor into Wallace & Gromit and Chicken Run have updated the old Santa Claus myth in their newest gift to movie loving children and adults. What child hasn’t arrived at the age when they asked the question, “How does Santa Claus deliver in just one night toys to all the children around the round?” The answer in this film is that has ditched the old reindeer sleigh and constructed a city-sized space ship similar to the one in Stephen Spielberg’s Close Encounters of the 3rd Kind with a team of a million elves trained to be lowered down and deliver the toys.

The current Santa (voiced by Jim Broadbent—we see displayed the portraits of previous Santas going back almost 1900 years) has relinquished Christmas Eve operations to his son Steve (Hugh Laurie), who runs things with great but hurried precision. Steve can hardly wait until his father retires, and is visibly upset that his younger brother Arthur (James McAvoy) is actually preferred by their father to assume command one day.

We soon see why, the difference between the two becoming apparent when Arthur, who is in charge of the Letters to Santa Department, discovers that the elves missed delivering a wrapped bicycle to a little girl in Cornwall. Steve, concerned with cost and efficiency, refuses to send anyone back to deliver the bike. It’s just one little girl.

Arthur is so upset over this that he, against orders from both his brother and his father, decides to deliver the bike himself. So he finds the old sleigh and reindeer, and accompanied by his grandfather (Bill Nighy) and a spunky elf named Bryony (Ashley Jensen), launches forth into the night. They have just a few hours until the sun rises and the child eagerly rushes down stairs to the Christmas tree.

What a series of adventures they have, with obstacles confronting them that seem impossible to overcome—and all of their Herculean efforts just to save Christmas for one child among the millions that were serviced that night. What a delightful tale to make us aware that even the smallest of us is important, and that someone cares enough to go to such great lengths for another. This has been a good year for animated films, 3-D at that, although this device is not necessary to enjoy this film.

This review with discussion questions will soon be available to VP subscribers at visualparables.net