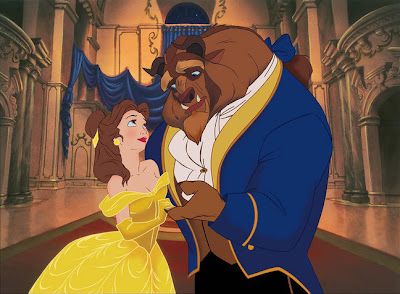 Belle begins to see beneath the ugly surface of her captor.
(c) Walt Disney Pictures
The Walt Disney studio gave us a wonderful Christmas gift, their delightful Broadway-style musical version of the classic tale Beauty and the Beast. It is so enchanting that adults can watch it in with or without children. The three disc Blu-Ray/DVD combo pact has a host of “extras,” and now you can also watch it at theaters on a big screen in 3-D.
Like a number of Disney films since the revival of the studio twenty years ago, this one features a strong heroine with whom girls can identify and boys can respect. Young Belle’s character is set forth in her opening song in which she reveals her love for books, her dissatisfaction with the local men, especially the vain bully Gaston, and her awareness that she does not fit in with the villagers. When her father is imprisoned by the dreaded Beast who lives in a huge castle, she sets forth to find him, offering to take her father’s place.
The Beast had once been a vain, cruel prince who was put under the spell that disfigured him and transformed his servants into such items as a clock, a tea pot and cups, and a candela­bra. The spell can be broken only by someone who loves the Beast as he is. But if this does not happen by his twenty first birthday, he will remain a Beast forever. The love story progresses from Belle’s initial repugnance to sympathy, and at last to…
The animation is superb, the set piece being a beautiful  banquet and ballroom dance scene glowingly reminiscent of the dance of Anna and the King in The King and I. The camera seems to swirl in and out and around the pair, and then twirls up and down for zooming overhead shots. A fine film for the whole family with a lesson on being willing to be different, on sacrifical love, and and of course, that beauty is more than appearances.