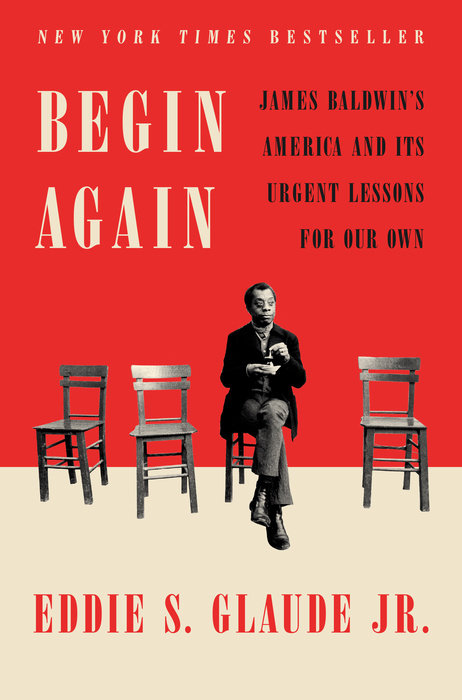 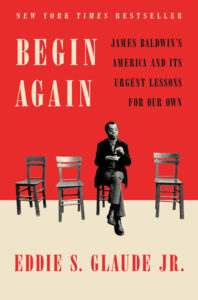 If you are an admirer of James Baldwin, you will surely want to read Eddie S. Gaude Jr.’s book BEGIN AGAIN. In its 238 pages (including a subject index) the frequent MSNBC guest gives us a grand tour of the life and writings of this fiery Black prophet. It does more than confirms what, we who have long treasured The Fire Next Time as a timely jeremiad against America’s seemingly incurable racism, have known; it adds to that base a wealth of facts about Baldwin and those caught up in the old Civil Rights Movement over 50 years ago. And in my case has led me to discover on YouTube a treasure trove of Baldwin videos. I recommend this book as a worthy  companion to the ten films I have described earlier as essential for understanding systematic racism. (Click here for that article with its short reviews of each film.)

Mr. Gaude travels far and wide in his study of Baldwin—from Heidelberg Germany (where he began the book) back to Harlem and through much of the South, tracing the footsteps of America’s angry prophet. Describing himself as “the elder brother” of the young SNCC members, such as Stokley Carmichael, with whom he met in 1963 at Howard University, Baldwin promises them that as their representative through his writing he will not betray them. The book’s first chapter, entitled “The Big Lie,” shows Baldwin describing himself as a witness to the truth, and thus dedicated to exposing America’s claim to be the bastion of democracy as a lie.

There is so much to this book, but here I will just briefly describe his story about what happened to Ben Chaney, who was 12 years-old when the brother he was idolized was murdered by Mississippi whites in 1964. (This is taken from the movie I Heard It Through the Grapevine) James Earl Chaney has been a SNCC member involved in Freedom Rides and voter registration in Mississippi and an important participant in the Freedom Summer Project when he and Michael Schwerner and Andrew Goodman, freshly arrived from their training session in Oxford Ohio were arrested, jailed in Philadelphia (MS), and taken out and slaughtered during the night. After the funeral the family had to leave the state because of so many death threats. They settled in Harlem with the help of the foundation set up by the Schwerner family. The boy attended school, but later dropped out and became radicalized by the writings of Malcolm X and the Black Panther Party. He traveled with a group of friends to Florida to pick up guns for what was to be a war on the United States. Two of the teenagers killed and robbed whites. Although not an active part of the crimes, Ben was identified by two of the survivors as present, and so was convicted in Florida and sentenced to life in prison. Eventually freed,* he became a law clerk. When he visited his brother’s grave back in Mississippi, he discovered it was riddled with bullet holes.

In a conversation with CR leader Dave Dennis, the latter tells Baldwin that Ben was radicalized by the country’s failure, “This country had its opportunity to choose the right road, but they’ve decided over and over again to take the wrong road.” Dennis ends on a note of pessimism, but both Baldwin then, and Gaude now, offer more hope—as do the recent street BLM demonstrations in which as many Whites are participating as Blacks.

I cannot recommend this book highly enough. The author proves that he is a worthy successor to Baldwin, becoming himself a witness to truth. You should read this in connection with one of the films from my Ten Film list, I Am Not Your Negro. The last line in Cornel West’s blurb sums up well my feeling after reading the book: “With subtle brilliance and heartfelt tears, Gaude breaks bread with Baldwin in order to give us courage and hope!” “Breaks bread”–yes, there is a spiritual dimension to reading this important book.

*This story is told in more detail in a 2008 article in Smithsonian Magazine.