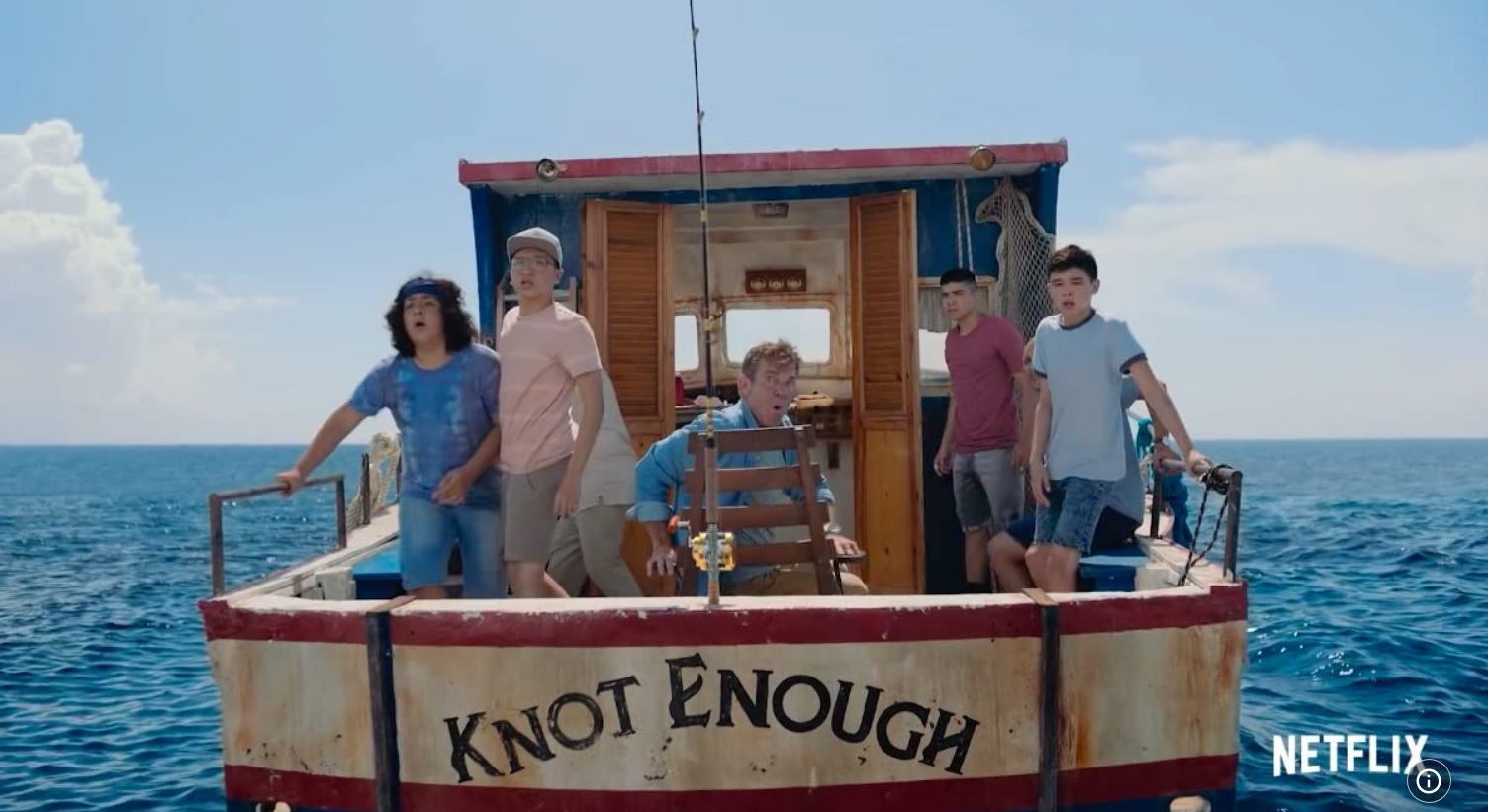 The righteous walk in integrity—
happy are the children who follow them!

Director Julio Quintana and his co-screenwriter Chris Dowling have just the tonic for movie lovers who might be a bit down in the dumps. Their Big Fish story, based on real people and a 2014 Mexican fishing competition is a formulaic sports story sure to raise your spirits—and with several of the characters children, a film the whole family can enjoy.

As shown by numerous aerial shots Cabo San Lucas is a picturesque sea-side town harboring hundreds of fishing boats and yachts, but it also has a seamier side. Come dark its streets sometimes are ablaze with gunfire from its warring youth. We see this the night that Omar (Jimmy Gonzales), head of a run-down orphanage named Casa Hogar is roused from bed to go and search for little Tweety (Steve Gutierrez), who again has run away. Finding him asleep, Omar carries his sleeping form in his arms. Just as he passes by two groups of youth facing each other on opposite sides of the street they start blazing away at each other.

It is to save Tweety and the other children ) from living in the dangerous streets that Omar and his wife Becca (Fernanda Urrejola struggle to keep the financially distressed institution open. Omar cares so deeply for the children that they all refer to him as “Papa Omar.” The bank is after Omar to pay a 100,000+ loan. On top of that burden a devastating hurricane blows through the town. Despite sandbagging water enters the hallways and rooms, causing extensive damage. Omar keeps assuring the anxious children that they will not have to go back to the streets, but he and Becca fear that there is little they can do to stave off such a fate for the children, especially when a businessman friend of Omar fails to persuade the bank to hold off on foreclosure within 30 days. Temptation arises when an old friend of Omar returns to town and invites his friend to join him in his criminal activities. Thus we learn of our hero’s dark past and his continual struggle to walk what Proverbs might call “the righteous walk.”

Meanwhile fishing boat Captain Wade (a grizzled Dennis Quaid) is struggling to make a living. We see he is a person of integrity a wealthy gringo comes to him, hearing he is cheaper, with the expectation that he will “guarantee” a blue marlin catch so he can go home with boasting rites. Wade orders him off the boat. It is almost time for the annual 2014 Bisbee’s Black & Blue Fishing Tournament, with its awards amounting to hundreds of thousands of dollars. Wade is frustrated that founder Wayne Bisbee (Bruce McGill) has disqualified his participation on a technicality, even though he has won the Tournament twice. Bisbee knows Omar, so he suggests that in order for Wade to enter the competition he must take on Omar and several of his orphans as his crew.

Wade bluster about this, and Omar points out that neither he nor the boys know anything about boats and swimming. Given both parties urgent needs, Wade grudgingly agrees, and Omar apprehensively consents. Matters grow more complicated when Omar insists that the crew include one of the older boys named Moco (Miguel Angel Garcia), who has subsisted as a thief. Wade adamantly says “No” because Moco had stolen his prized pocket watch—though Omar had made the boy return it. Omar, desperately trying to salvage the damaged teen, says that he and the other boys will withdraw if Moco is refused.

And so the motley crew launches off on the first day of the three-day tournament, with Omar and the boy’s inexperience clearly making this a fish out of water story in a double sense. The various boys get on Wade’s nerves; there is a man overboard situation; and more that seem to add to the overwhelming odds against their success. Indeed, at the beginning of one of the days, the fuel line of the decrepit tub, aptly named “Knot Enough,” delays their start, the hundred or more other gleaming boats leaving them far behind.

In addition to the sub-story of Omar’s trying to redeem Moco—the lad refuses his mentor’s invitation to stay at the orphanage—an ethical issue is inserted when, after two days of failure, Wade suggests one night that he hide the marlin he has surreptitiously bought from a fisherman and the next day, distract the attention of the boys while the two of them place the already dead marlin on the hook. Unseen by either of them is Moco, who though refusing the orphanage’s shelter, has found a niche on its roof to sleep in.

Thus there is a double sense of suspense as to what will happen on the last day of the tournament. This heightening of suspense as the climax approaches is true of all sports films. Those who enjoy the rush that such films bring will not be disappointed. Formulaic it might be, but the feeling of joy and vindication is real. And in Omar we are given an example of a man who has overcome his past and dedicated himself to helping other boys like he had been, only to be faced again with the temptation to take a short cut. Oddly enough, in the case of Wade, his plan to cheat can be seen as a sign that he has turned from his selfishness to care for the boys and the fate of their sanctuary. Indeed, we see that he will be leaving town to try to amend his abandonment of his own son back in the States years earlier.

What do you think?