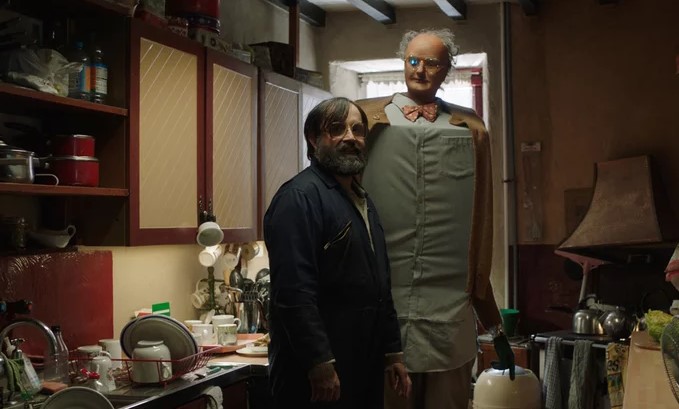 
“Blessed are the meek, for they will inherit the earth.

Brian Gittins (David Earl) is a wacko version of Thomas Edison as he compensates for lack of companions by working nights in his cluttered shed to come up with inventions. There is his belt with pockets to hold the eggs laid by his chickens, though he is the only one actually using one. There are shoes modified by trawler nets on the back, which no shoe manufacturer ever will market. Craziest of all is his da Vinci-like flying machine that combines a bicycle with cuckoo clock, which crashes amidst a lot of noise.

Then comes success—and companionship—when he creates a robot. It’s not the sleek kind seen in science fiction epics, but one fashioned from a cast-off mannequin head, a broken down washing machine, some metal scraps, and some miscellaneous odds and ends. At first it too seems a failure, remaining silent, but then comes the night during a storm, and the creature comes alive. Over seven feet high (voiced by Chris Hayward), the creature likes cabbages, and soon is growing in understanding by reading books. It chooses the name Charles. Brian now has a companion, though also a problem—how to keep Charles safe from neighbors—especially the town bully Eddie (Jamie Michie). Also, when Charles becomes bored with their quiet home life and wants to see the world, especially Hawaii, can he curb his friend’s wanderlust.

How all this is resolved and Brian draws closer to the one neighbor genuinely interested in him, Hazel (Louise Brealey) adds up to unusual entertainment that is both poignant and funny. The two stars also co-wrote the fanciful script. I love the way they avoid the usual resolution of bullying, avoiding the pound him into the ground ending with the audience cheering. Director Jim Archer has taken his own short film of the same name and turned it into a feature film for who enjoy the droll type of comedy peculiar to the Brits.

This review is in the July issue of  VP along with a set of questions for reflection and/or discussion. If you have found reviews on this site helpful, please consider purchasing a subscription or individual issue in The Store.

A buddy movie with lonely Welshman Brian, a crackpot inventor, making a bizarre companion, a robot, from scrap materials, including a manikin head & a washing machine.
Editor Rating ★★★★★4 out of 5
More Details