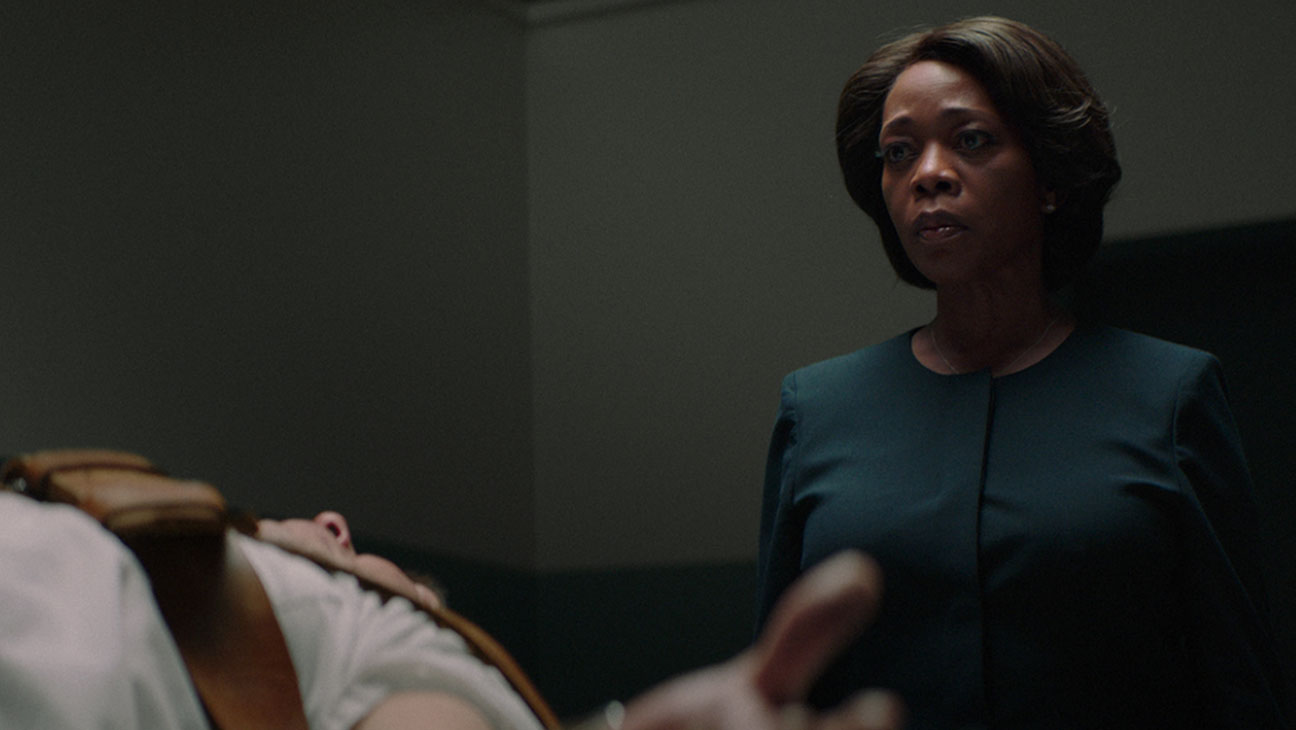 Alfre Woodard and Alex Castillo appear in Clemencyby Chinonye Chokwu, an official selection of the U.S. Dramatic Competition at the 2019 Sundance Film Festival. Courtsey of Sundance Institute | photo by Eric Branco All photos are copyrighted and may be used by press only for the purpose of news or editorial coverage of Sundance Institute programs. Photos must be accompanied by a credit to the photographer and/or 'Courtesy of Sundance Institute.' Unauthorized use, alteration, reproduction or sale of logos and/or photos is strictly prohibited.

I lie awake;
I am like a lonely bird on the housetop.


No, in all these things we are more than conquerors through him who loved us. For I am convinced that neither death, nor life, nor angels, nor rulers, nor things present, nor things to come, nor powers, nor height, nor depth, nor anything else in all creation, will be able to separate us from the love of God in Christ Jesus our Lord.

Director/writer Chinonye Chukwu has given us a prison film unlike most anything you have seen, in that her focus is not on a condemned prisoner, but on the person in charge of the execution of prisoners, the warden. We do become concerned about the fate of the prisoner on death row, who could be innocent of the murder for which he has been sentenced to death, but it is the story of Warden Bernadine Williams (Alfre Woodward) which dominates the lesser stories of the film.

The film begins with the execution by lethal injection of Victor Jiminez (Alex Castillo), which is botched, causing him to die in great pain. Warden Williams comes under political and public pressure to ensure that the next one will come off better. She had seemed distant and cold during the preparations, but we come to see that this is a coping tactic. During an argument over the eleven executions on her watch she insists, “I gave these men respect all the way through.” Being a black woman, and thus subject to more than the usual scrutiny by others, she goes strictly by the rules. Twice she could have bent them for the benefit of relatives of a prisoner or victim, and both times she refuses, falling back on the old bureaucratic excuse for lack of compassion, “Rules are rules.”

The upcoming execution of Anthony Woods (Aldis Hodge) especially troubles her. Much of the evidence should have proved him innocent of the actual shooting, though he does admit to being one of the two robbers in the botched holdup that resulted in the death of a police officer. The crime had been committed 15 years earlier, and Anthony became one of the victims of the tough on crime legislation the public had pressured Congress to pass. Today, pickets representing those with a far different conviction are at the entrance to the prison, demanding clemency for the wrongfully convicted Black man. Anthony himself says little, living only on the hope offered by his dogged defense lawyer Marty Lumetta (Richard Schiff) who has been working on his behalf for seven years. Thus, when the burnt-out counsel reveals that he will be retiring after this case, Anthony fearfully begs him not to give up on him in their suit for clemency from the governor. “You are my only hope,” he pleads. However, Marty is too exhausted to feed his client’s illusions, telling him that the governor probably will turn them down, despite the evidence for his innocence.

The pressure on Bernadine affects her personal life. Instead of going right home after work, she stops at the local watering hole to drink and talk with lawyer Marty and others who frequent the place. One of the “others” is her deputy warden, Thomas (Richard Gunn), perhaps the only man who can fully understand the pain of her position.

Her husband Jonathan (Wendell Pierce), a schoolteacher, is becoming fed up with her distancing herself from him. He calls her an empty shell, telling her she should quit. He almost pleads with her to come back to him. She admits that her duties of presiding over the deaths of the men has deeply affected her. Feeling cut off from everyone, she confesses, “I am alone, and nobody can fix it.”

Still desperately believing he will receive clemency; Anthony’s hope suffers another blow when his former lover Evette Wilkinson (Danielle Brooks) meets with him. After a long period, she had finally written him a letter informing him that they had sired a son. During her visit she painfully tells him that she had decide to choose between staying in touch with him or giving her all to their son, free from any shadow of the father who was doomed to die. She promises to bring their now teenage son for a visit—but will she?

An important figure left out of most reviews, including, surprisingly, Wikipedia’s plot summary, is Chaplain David Kendricks (Michael O’Neill). Although we see far less of him than Warden Williams or lawyer Lumetta, he too is going through inner turmoil and has decided to retire. When we see him with the first prisoner to be executed, he too seems distant, standing by but saying little. It is with Anthony that the clergyman opens up more. The warden has asked him to try to speak with the condemned man, which eventually he does. He can bring no legal news, but true to his calling, he does impart the Good News to the despondent man. He reads the stirring words from the apostle Paul’s 8th chapter of Romans, asserting that nothing in all creation can separate him from the love of God. Were this a faith-based film, there would be uplifting music accompanying Anthony’s acceptance of God’s love. Instead Ms. Chukwu cuts away at the end of the chaplain’s reading.

It is actually the lawyer at his last meeting with the doomed client who brings Anthony back from the abyss of total despair. I’ll leave it for you to discover this, though I do want to point out it is connected with the excerpt from Ralph Ellison’s Invisible Man that Jonathan reads to his high school literature class. Both observations about seeing the invisible are true, in the film, and in real life. Once, what so many nostalgic whites post on the Internet as the Good Old Days, the lives of men like Anthony were snuffed out by a racist justice system with few taking notice of them. They were indeed “invisible” men. That is no longer the case, though, of course, of small comfort to Anthony. Nonetheless, he is assured, his life has mattered. Bolstered by the insights and compassion of chaplain and lawyer, the reticent Anthony is able to address those gathered to witness his death in a mature, even noble, way in a scene you will long remember.

Bernadine, and I choose to call her this now rather than by the title of her position, is far less composed at this, her 12th execution. The camera lingers on her face for an uncomfortably long time so that we will not miss the tears that she no longer can hold back. We don’t know what she will do, though she has reconciled with her husband, but we do know that her repressed humanity is being released. She is not Warden Williams, but Bernadine Williams as her heart breaks over the unjust fate of the man she has been required to kill because of her position. Earlier one of her trusted senior guards had asked to be taken off the execution team because he could not longer be so directly involved in killing a man. Warden Williams is at the of the chain of command top (next to the governor), so she cannot remove herself—unless, and that the film leaves us to ruminate upon.

That last, wordless, long shot reminds us, as if we needed a reminder, what a consummate actress Alfre Woodard is. The film was not released until the last of December 2019, so I assume that it was too late for enough Academy voters to watch her in order to nominate her for the 2020 Awards. She deserved better!

Writer Chukwu does not offer us a sermon against capital punishment, but there is no doubt which side she is on. She has said in interviews that the execution of Troy Davis on September 21, 2011, for murdering police officer Mark MacPhail in Savannah, Georgia, in 1989, influenced her because of the national calls for clemency from activist, abolitionist, and politicians. Even wardens, lent their names to the petitions. She studied the issues involved, visiting prisons and wardens, and has worked with female prisoners. When it came time to shoot her script, she encouraged the two stars to visit wardens and prisoners on death row, Ms. Woodward with the former, and Mr. Hodge with the latter—indeed, she went with them. The result is an authentic script graced by all around excellent performances, and fine underlying support from the camera and music crews.

Even those who support the death penalty before seeing this film might pause to think about its human cost on everyone involved in carrying it out, warden and guards as well as the criminals and relatives of the victims. . It is telling that  Ms. Chukwu did not entitle her film The Warden.  By her choice of Clemency  she shows that the warden is but a part of a large, inhumane system, a legal killing machine. The governor may have the power of clemency, but he, and a legislature that writes the laws, is elected by the people. And so her film lays down a challenge for us the audience.

This review will be in the August of VP along with a set of questions for reflection and/or discussion. If you have found reviews on this site helpful, please consider purchasing a subscription or individual issue in The Store.