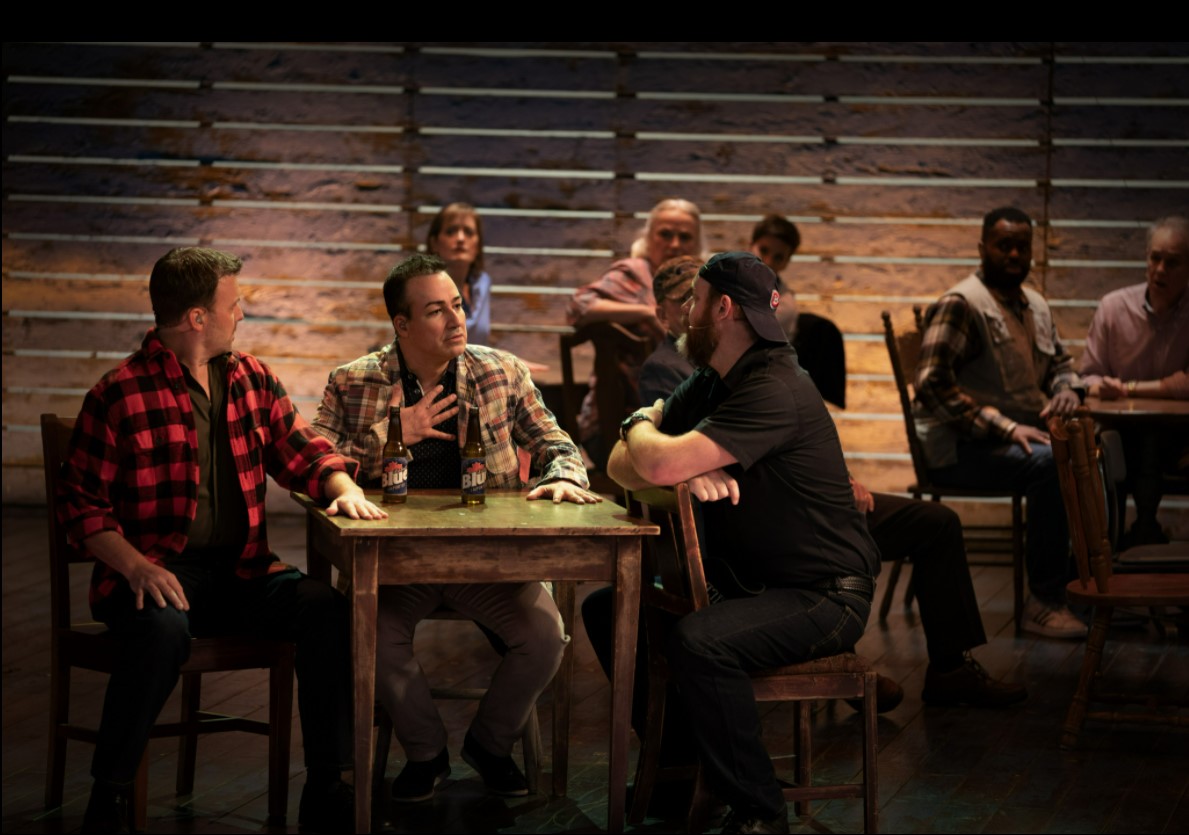 Be anxious for nothing...


We know that in everything God works for good with those who love him, who are called according to his purpose.


“Look for the helpers.”

The horrific events that occurred 20 years ago on 9/11 reveal the evil depths that humanity can sink to, but this filmed version of David Hein and Irene Sankoff’s Broadway play celebrates the heights to which humanity can rise. Directed by Christopher Ashley, who won a Tony Award for directing the play, it is probably the best filmed version of a play that I have seen, transporting us close enough so that we can see the marks of concern and joy on the faces of the actors. Streaming on Apple TV+, it is a great way to commemorate the 20th, or any other, anniversary of that tragic event.

The writer/composers adapted their play from the book The Day the World Came to Town: 9/11 in Gander, Newfoundland, which tells multiple stories of the almost 7,000 people stranded in the small town when 38 flights were grounded after the attacks, just about doubling the size of the community. The village is next to a very large airport that during the days of prop planes was a stopping off point for hundreds of international flights requiring refueling before reaching the United States. There had been plans and talk of demolishing the now little used airport, but fortunately they had not been carried out. As soon as the FAA realized that the two planes that crashed into buildings (and a third which never made it thanks to passengers rushing the terrorists) were controlled by terrorists, it issued orders grounding every plane in the nation. No thought was given as to the care of the stranded passengers and crews, the safety of America’s cities being paramount. The book, and now the play, show us the love, fear, and the results of one community that went to extraordinary measures to care for strangers—7000 of them, and as local SPCA worker Bonnie (Petrina Bromley) discovers, a number of dogs, cats, and even two bonobos on their way to the Columbus Zoo—and one of the latter is pregnant.

This live performance features about a dozen actors sing and dance, each playing multiple roles, plus a small band off to one side most of the evening. The staging is simple, relying on the actors quickly donning and offing hats and caps and other clothing accessories as they change from one character to another. They make good use of a large turntable, quickly rearranging the chairs to be various airplane cabins, a hall, restaurant (including a Tim Horton where the mayor and other town leaders often gather), or bar. The action begins on September 11 with Mayor) and townspeople singing about the remoteness of their town and island and concludes with a tenth anniversary celebration to which many of the “planes people” have returned, filled with gratitude for their amazing treatment by the Canadians.

Of course, the play can focus upon a small number of the almost 7000 participants, so we have the following:

Matronly Hannah (Q. Smith) and Beulah (Astrid Van Wieren) bond over the fact they both have sons who are firefighters., the latter worried because she has received no word about the whereabouts of her son in Manhattan.

Bob (De’Lon Grant) as a Black in an all-white town is fearful for his life and wallet, but soon won over by the ocean of good will from the Canadians.

Bonnie (Petrina Bromley), manager of the local animal shelters, cares for the animals left on the planes.

Texan Diane (Sharon Wheatley) and Englishman Nick (Jim Walton) are romantically attracted to each other.

Kevin (Caesar Samayoa) and Kevin (Tony LePage) at first are anxious how the townsfolk will regard them, until person after person report that they have a gay relative.

Ali (also played by Caesar Samayoa) remains the loneliest, being a Muslim Egyptian whom the passengers and most of the town folk lump him together with the terrorists.

Janice (Emily Walton) is beginning her first as the local news reporter, not dreaming she would be eyewitness to an international story.

Perhaps most outstanding is Beverly Bass (Jenn Colella), whose anthem-like song telling the story of becoming the first female American Airlines pilot as well as captaining the first all-female flight crew will stir up the passions of feminists almost as much as “I Am Woman.”

Except for the last-mentioned number, the songs will not stand out as do some in other musicals because this is an ensemble production, with every song and recitative between songs contributing to the telling of a remarkable story. Tribute is paid to all the major, especially in a lovely montage that begins with a man singing “Make Me an Instrument of Your Peace” and a rabbi chanting a Hebrew song. In one scene when the bus driver delivers a load of Africans to their shelter at a Salvation Army camp, the fearful passengers, all non-English speaking Africans, do not move. Noticing that one is carrying a Bible, the driver asks for it, saying that though he cannot read it, the numbering system is the same. He thumbs through to Philippians 4:6 and points to it as he says aloud in English, “Be anxious for nothing…” The Africans, now recognizing his meaning, quietly disembark.

There are many dramatic moments in the play, and yet there are just as many funny ones as well, some at the expense of Gander (mostly said by its own residents). I enjoyed Captain Bass telling how she began her career flying corpses for a major funeral company, sometimes even having to climb over their bodies to reach the cockpit: “No one ever complained,” she reports.

One fact that I learned reflects poorly upon the authorities at the time: the passengers, some of whom were forced to remain in their cramped seats for well over 24 hours before being allowed off the planes, were kept in the dark about the reason for their planes being grounded. Why they were not told about the attacks remains a mystery. The authorities were either insensitive or stupid, or maybe both. It was not until they were welcomed by the Gander villagers that they learned of the attacks. Immediately phones became such a priority that for a while they forgot the food awaiting them, with more phones quickly provided so they could contact their loved ones.

This is a rousing, beautiful film that pays fitting tribute to a group of people, Canadians and their guests, all affected by the desperate act of fanatics fueled by their grudge against America. At the Tenth Anniversary Mayor Claude (Joel Hatch) says, “Tonight we honor what was lost but we also commemorate what we found.” Be sure to stay with the closing credits which are accompanied by photos of the cast members and one of the real persons they are playing.

What those generous Canadians did is an inspiring example of what the apostle Paul meant when he wrote, “We know that in everything God works for good with those who love him.” Terrorists may do their worst, but the helpers referred to by Mr. Rogers will always be there as well, God working through their generous hearts and helping hands.

Filmed version of play describing the generous welcome the villagers of Gander Newfoundland gave to stranded passengers by 9/11.
Editor Rating ★★★★★5 out of 5
More Details