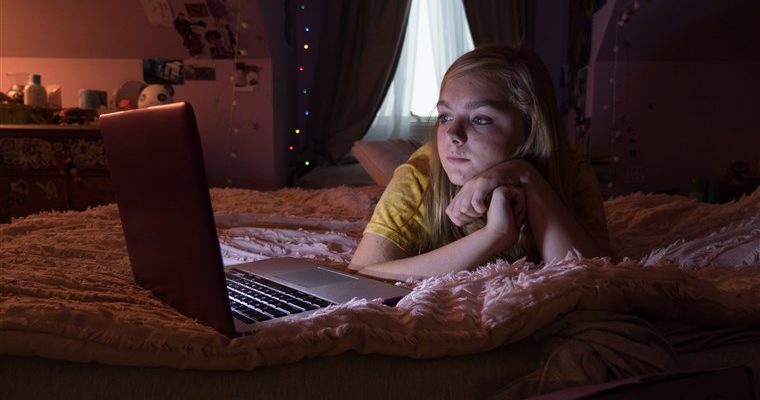 Kayla's world centers on her Internet activities. (c) A24

Children, obey your parents in the Lord, for this is right. ‘Honor your father and mother'—this is the first commandment with a promise: ‘so that it may be well with you and you may live long on the earth.’ And, fathers, do not provoke your children to anger, but bring them up in the discipline and instruction of the Lord.

Love is patient; love is kind; love is not envious or boastful or arrogant or rude. It does not insist on its own way; it is not irritable or resentful; it does not rejoice in wrong-doing, but rejoices in the truth. It bears all things, believes all things, hopes all things, endures all things.

Writer/director Bo Burnham is able to reach back and recall the awkwardness of the middle school years, the aching desire to fit in, and the rebellious streak that regard parents as the Enemy out to spoil the fun of life. This is the third father-daughter reviewed in this issue, and it ties with Leave No Trace for the depth of its insights. And it is remarkable that not only is this comedian Burnham’s first feature film, but that he should write about a girl!

Kayla (Elsie Fisher) is a wannabe 13-year-old whom we first see in front of her computer taping one of her YouTube videos giving out inane advice about being yourself. We can see on her screen that she has no following, so the reasons that she does this so frequently, we assume, is that she continues either out of hope or because she needs this outlet to express herself. At school she has no friends, and to her regret at the school assembly where the various class ratings of “The Most” are read aloud by a teacher, she was voted “Most Quiet.”

It is not because she has not tried: in one hallway scene she attempts to talk with two popular girls, but their attention is rivetted to their cellphones. They look up at her for just a moment before returning their eyes to their screens, barely recognizing her presence. She is clearly a non-entity in their social worlds, not worth their Twitter time to even mention her.

At suppertime Kayla herself does not act any better toward her single father Mark (Josh Hamilton). He tries to converse with her, but she remains preoccupied with her cellphone, only removing one of the ear pods when he raises his voice. Prying information from her about her day is like trying to get a CIA agent to divulge a top secret. I must confess that as I watched this repeated several times, I wanted him to grab and shake her and confiscate the abominable device. This seems to be his biggest failure as a parent–allowing the cellphone to be brought to the table. He continually affirms that she is an amazing person, but because she only grunts a reply and never reveals her true situation at school, he is ineffective in raising her depressed spirit.

When the mother of a popular girl, who does not like Kayla, invites her to her daughter’s birthday party, it is only because the woman has set her eye upon Kayla’s father. The party is a pool-side affair, and Kayla hesitates for a long time donning her bathing suit and joining the guests. Her whole posture as she walks outside spells “loser,” her shoulders drooping, her unsmiling face and downcast eyes marking her as an out sider. When it comes time for the birthday girl to open the presents, Kayla’s turns out to be a much smaller package. With no expression of pleasure, the girl stares at the unwrapped box containing a game, and in an unfriendly voice asks, “What is it?” Kayla lamely tries to explain that it is a card game, “like ‘Go Fish,’ but more fun.”

At the school assembly, held to celebrate their graduation from eighth grade next week, the students are handed back a Time Capsule box of items that they had turned in when they entered Sixth Grade. Kayla had pasted on the lid of hers in sparkly letters “To the Coolest Girl in the World,” the many items in the box making all the poignant her failure to live up to that title during her middle school career.

Her class takes a field trip to what will become their high school, Kayla as usual sitting alone on the bus. She brightens when the guide assigned to show her around is Olivia (Emily Robinson), a senior who really takes her assignment seriously as she interacts with Kayla with genuine interest. The kind-hearted girl even allows Kayla to join her and some friends the next day for lunch at the local mall. Although a nasty senior boy makes her feel very welcome, Kayla nonetheless is invited to go along on a group date. What happens when she is alone with one of the older boys will test her strength of character—a game of “Truth or Dare” ruining her night.

The film is often funny, and deserves its “R” rating, which in a way is too bad in that it limits its audience. There is a scene in which Kayla checks out “blow job” on the Internet out of the belief that that is what boys all want. She goes into the kitchen to pick out a banana for practice, which is just when Dad walks in, resulting in a very nervous, awkward conversation because she had always hated bananas.

The film realistically portrays the plight of many young girls, but in a non-sensational way. Kayla is not bullied, but ignored, and this too can be debilitating, especially in a youth society dominated by Instagram and Snapchat. While reflecting on the film, the great poem of Britisher G. A. Studdert-Kennedy came to mind, “When Jesus Came to Birmingham,” the first two verses being:

“When Jesus came to Golgotha, they hanged Him on a tree,
They drove great nails through hands and feet, and made a Calvary;
They crowned Him with a crown of thorns, red were His wounds and deep,
For those were crude and cruel days, and human flesh was cheap.

When Jesus came to Birmingham, they simply passed Him by.
They would not hurt a hair of Him, they only let Him die;
For men had grown more tender, and they would not give Him pain,
They only just passed down the street, and left Him in the rain. ”

(For the entire poem go to: https://www.poemhunter.com/poem/when-jesus-came-to-birmingham/)

This in turn made me think of a powerful short film popular during the early days of my ministry. Entitled Cipher in the Snow, it was about a grade school boy who suddenly drops dead one winter for no perceivable cause while awaiting the school bus, and when his teacher, who could not remember the boy, inquired of the other children, discovered that no one else could remember the shy boy either.

Fortunately, Kayla does not meet such a fate. The film builds up to one of the most tender scenes between a father and daughter that you are likely to see. What Mark says to her, and at last her listening to him—well, that should happen to every girl at that crucial coming of age moment. What a film for religious groups or parents and adolescent children to watch and discuss! The inclusion on the soundtrack of Enya’s haunting performance of Orinoco Flow (Sail Away) adds to the emotional effect of this memorable film.

Although Kayla writes an advice column on YouTube, she has no friends at school, nor YT followers, her dad being her best friend.
Editor Rating ★★★★★5 out of 5
More Details