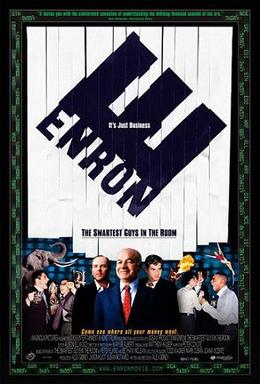 The love of money is the root of all evil. 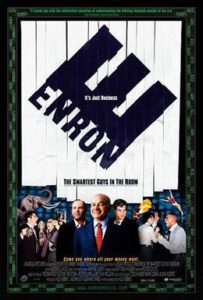 Alex Gibney has obviously engaged in a great amount of research in putting together what amounts to an indictment of those who built and then destroyed a powerful American corporation. No doubt he was greatly aided by the book he based his script upon, The Smartest Guys in the Room: The Amazing Rise and Scandalous Fall of Enron, by Bethany McLean and Peter Elkind. He has gleaned from in-house video productions clips of Enron heads Ken Lay and Jeff Skilling speaking to employees, assuring them that all is well with the company and that they should continue to invest their retirement funds in it—while at the same time they were selling their shares. We hear the voices of Enron salesmen telling a California power plant manager to shut down for a while, helping to create the infamous state power shortage, and thus drive up its cost—and then boasting about how they created so much havoc.

Critics, including the journalists who helped expose the lies of Lay and associates, as well as John Olson, the Merrill Lynch stock analyst who questioned the veracity of Enron’s financial statements and thereby lost his job, make their comments, with narrative read by Peter Coyote joining the scenes together to form a narrative of corporate arrogance and greed so massive that it is hard to believe. If there is any hero in the film, in addition to Olson, it must be Enron executive Sherron Watkins, who wrote the memo to Ken Lay calling into question company claims and practices.

This is an important documentary that suggests that we should always stand on guard and be ready to question those endued with great power. Although the main blame for Enron’s collapse and the loss of 20,000 jobs and life savings was due mainly to the chicanery of its leaders, the filmmakers also point out the failure of government and regulators and auditors (Arthur Anderson went down with Enron) to watch over and regulate the corporation, as well as journalists who lionized the leaders, turning them into celebrities and leaders to emulate. Film critic Rogert Ebert was right when he wrote, “This is not a political documentary. It is a crime story.” It is indeed, as well as a morality tale.