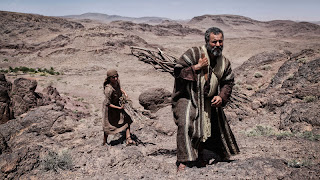 I am beginning these remarks about Week One of the History Channel’s The Bible during a commercial break in The Vikings—strange that the HC should debut both big budget series on the same night! Anyway, now that I have seen the entire first installment, I can go beyond my first bog when I had watched but ten short excerpts from the series.

I am not nearly as enthusiastic about the series as last week. The literalistic approach gets in the way more than I had hoped it would—and yet at the same time, some of the looseness with biblical text also bothers me. I was a bit surprised that the episode began with a storm-tossed boat in which Noah tells his family, “In the beginning God…” and over the next few minutes he recites a digest version of the Genesis creation story. Biblical scholars believe that Genesis was written as the opening of what came to be called the Pentateuch at the end of the kingdom of Judah in the 6thcentury BCE, possibly during the Babylonian and Persians period when the old stories were in danger of being forgotten by the Jews because of their captivity. And yet in this episode, set in prehistoric days, it seems that Noah is the author, or at least the transmitter of the Genesis stories because he is quoting the text as we now know it.

The Bible is such a large and complex book, no, a libraryof books, that we expect much has to be left out of the presentation, even one of ten hours in length. Noah in two or three minutes relates the events of the six days of creation, the camera showing us the natural beauty of the sea, the fish, animals and birds, concluding with a close up of Adam, his face covered still with the mud from which he has been created Then in but a few seconds we have the tale of the Temptation and Fall, immediately followed by Cain murdering his brother Abel. When Noah says that on the seventh day God rested, the storm has stopped, and he walks out onto the deck of the huge ark to enjoy the sunshine. The camera rapidly draws back, revealing a rainbow, and then the ark becomes a speck, and we move high into the stratosphere so that the curvature of the earth is visible, and we go even higher to see that the entire planet is flooded—not, as most biblical scholars believe, just the plains of the Fertile Crescent, but the whole darn planet.
Thus this is indeed a literalistic interpretation of the Jewish/Christian scriptures. It could be very puzzling or even misleading for non-believers who have known of this story only because they have seen so many children’s wooden and plastic toys labeled “Noah’s Ark.’ Misleading in that the God depicted might seem not only wrathful but unjustly arbitrary. We see people outside the ark being drowned by the deluge. Why them? Why are Noah and his family tucked safely inside? I do not recall any mention of the pervasive wickedness of those drowning, nor of the contrasting good and righteous life of Noah. Now Cecil B. DeMille would never have made that mistake: he would have clearly shown the audience how wicked the people were by pushing the old Hays Code to the limit and staging an orgy of nearly naked revelers, as he did in his Ten Commandments.
Moving on, my initial good feeling about the Abraham sequence was partially fulfilled, though I am puzzled why the script has everyone calling the patriarch “Abraham” from its beginning, when his original name was Abram (and Sarah’s Sarai). The name change is the Genesis author’s way of showing that when the patriarch enters into the covenant with God, his whole life is changed, as well as the future of humankind.  If you want to see a really satisfying depiction of the life of Abram/Abraham and Sarai/Sarah, be sure to see the Bible Collection’s Abraham, in which the great actor Richard Harris portrays the patriarch in an unforgettable way. The sacrifice of Isaac is the climax of this almost two-hour film, and when Abraham hears God’s call to sacrifice his son, the agony of the father’s heart is expressed both in his words and the horror we see in his eyes. This is the film to see to gain a good understanding of the patriarch—and as an added bonus, the film stars Barbara Hershey as Sarai/Sarah.

I said my good feeling for the Abraham segment was “partially fulfilled” because the part dealing with Lot and Sodom was handled very poorly. When Abraham gave food to the three mysterious travelers, we see that they, when the three pulled back their monastic-like hoods, consisted of an African, a Chinese or Japanese, and from the quick glimpse of the third, a Caucasian. When the three show up at Lot’s house in Sodom, and the neighbors try to break in and carry them away, the three pull away their robes and hoods, revealing that they are wearing armor. Then drawing his two swords, the Asian fights off their attackers, exercising nimble jumps/somersaults and killing all within sword-reach. For a moment I thought the producers must have lifted this bizarre scene from a Ninja movie!
Apparently The Bible’s producers wanted to get to Moses and the Exodus ASAP, because the film jumps over the richly dramatic Jacob and Joseph sagas to arrive at Moses and Pharaoh’s son fighting each other. Unlike the excellent animated Prince of Egypt, these two are not loving friends, but bitter rivals, the blood-son anxious about succession to the throne. The major events of the Exodus story are told (see my previous blog for the Burning Bush episode) in rapid succession—the various plagues, quick cuts to Pharaoh saying “No” to Moses, and then the Passover (if there was any mention of the meal shared by the Hebrew families, I do not recall it), and the rush to the Red Sea, the chase by Pharaoh and his army, the parting of the sea, the drowning of the pursuers, the miraculous giving of Ten Commandments, and the passing on of leadership to Joshua. A better, far more poignant, rendering of this story is the animated Prince of Egypt in which Moses and Ramses grow up as loving brothers. This depiction makes the later conflict between the two princes of Egypts more tragic, with the Egyptian Pharaoh, after his army has perished in the Red Sea, calling out Moses’ name, but in this version it is a lament.

It will be interesting to see if the second week’s episode is as mixed a bag as this week’s. Before closing I want to make one more comment on the Sacrifice of Isaac episode. The patriarch’s total obedience to God carried to the extreme that he submits to the command to sacrifice his only son is easily misunderstood. In the 1997 film about a father’s burning the evidence that might implicate his son in a murder Before & After. Jacob (Liam Neeson), wanting to justify his illegal act, tells his wife Carolyn (Meryl Streep) the story of Abraham and Isaac. “Very obedient, Abraham. Very righteous,” he says with contempt, “But when they tell the story, they always miss the point. Who would want him for a father?” Of course, neither Jacob nor most people who read the biblical story understand the culture of Abraham’s time, one in which the sacrifice of the first born to a god was commonly accepted in order to obtain from the god the guarantee of future fertility, both of the wife’s womb and that of the fields. This is why the Hebrew prophets were so adamant that the people have absolutely nothing to do with their pagan neighbors’ especially their religion that included the sacrifice of first-born babies to appease the gods/goddesses.

The producers of The Bible, who perhaps use a narrator too much (when Lot’s wife is turned into a pillar of salt we don’t have to be told this is what happened!), could have had either the narrator or the patriarch himself say something about how everyone was expected to sacrifice their first-born. Liam Neeson’s Jacob is the one who missed the point of the story, not the readers of the story, the point of the story being that faith in God must transcend our loyalty to family, and that trusting him “to provide the lamb” will be rewarded.