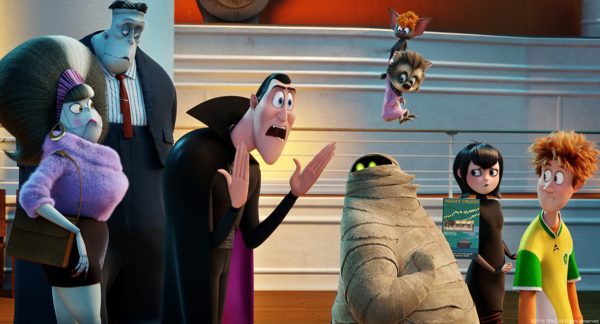 Have we not all one father? Has not one God created us? Why then are we faithless to one another, profaning the covenant of our ancestors?

Director Genndy Tartakovsky’s animated film arrives at the same conclusion as the ancient Hebrew prophet did, though in non-religious terms, namely that we have more in common with those we hate because they are different than we think. The film stars off with a short prequel that introduces Abraham Van Helsing (Jim Gaffigan), Count Dracula’s (Adam Sandler) nemesis. Through the years Van Helsing has tried to wipe out the Count and his monster friends but has always failed.

In the present at Hotel Transylvania Dracula and his daughter Mavis (Selena Gomez) have been working so hard seeing to the comfort of their many monster guests that he is exhausted—and also lonely because he still misses his dead wife. Mavis books them a vacation a luxury cruise for monsters that begins in the Bermuda Triangle and ends at Atlantis.

Dracula at first is not very interested in the many diversions, regarding their quarters as not much different from his Hotel Transylvania, except that they are on a boat. Then he catches sight of the white-uniformed ship’s captain Ericka (Kathryn Hahn), and for the second time in his life he feels what he calls a “zing.” When they meet, the smitten Count can speak only in gibberish, which Ericka thinks is his native language. Unknown to Dracula, Erika is the great granddaughter of Abraham Van Helsing, living below decks in a wheelchair. He tells her to play along with the Count until they reach Atlantis where he will use a machine he is working on to destroy him.

Ericka wants to kill the Count now, so aboard the ship and beneath the ship she tries many times, her amusing hits and misses reminding me of the old Road Runner and Wile E. Coyote cartoons in which the predator repeatedly fails to bag his quarry. During some of the quieter times Erick comes to admire Dracula’s love for his daughter, she even sharing with him that she too lost her mother when she was young. But will this softening be enough for her to give up her evil plan? Does the sun rise in the east and set in the west?

The film is marvelously animated with several dance numbers lots of fun. The audience obviously loved the sequence early on in which the lonely Dracula tells his smart phone that he wants a date, and it replies that it is “Friday the 13th.” It continues to misunderstand his request, giving another absurd answer. The jokes, visual and verbal, come fast and furious, as does the action, so from the youngest to the oldest member of the family, no one should be bored. And, as usual, the reconciliation and realization that we have more in common than what divides us is a good message, especially during our present time of hostility.

Sorry, not time to come up with a set of questions.

This review is in the August 2018 issue of Visual Parables.

When his daughter convinces him to go on a vacation cruise Dracula falls for the female captain of the ship, but she, the great granddaughter of his arch-enemy, plots to kill him.
Editor Rating ★★★★★4 out of 5
More Details