I have posted on FaceBook the video “Spirit of America” for which this provides background information. 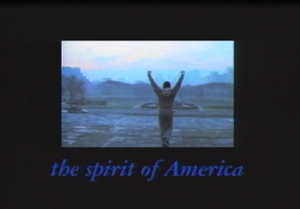 The attack on the Twin Towers and the Pentagon on the morning of September 11, 2001 left the nation in shock and mourning. A total of almost 3000 people died in the Twin Towers in New York, at the Pentagon in Washington, and in a Pennsylvania field, the latter when passengers revolted and decided to fight the hijackers. During the country’s depressed mood film/TV director Michael Ray Rhodes wanted to do something to help lift our spirits. His solution would result in a short film called “Spirit of America.” Millions of Americans saw it, first in thousands of movie theaters, then on various TV outlets.

Mike raised enough money to hire Chuck Workman, the Oscar-winning film editor who created most of the film montages shown as a part of the Academy Award broadcasts. Mike asked me join him in suggesting films from which short clips could be selected for the film—also to invite Visual Parable readers to do the same. Several friends did, and after a couple of weeks I sent the suggestions to Mike, who in turn gave them to Chuck.

During the selection and editing period Mike contacted all the parties whose permission would be needed for the legal use of the clips groups representing directors, actors, writers, and the studios. Kodak agreed to supply the film stock and labs  to furnish their services. Even NATO entered the picture. No, not the NATO designed to protect us from Russian attack, but the group consisting of theater owners, The National Association of Theater Owners. This was truly a massive cooperative project.

“Spirit of America” was divided into 13 sections: Introduction, Diversity, Defiance, Work, Family, Home, Heroism, Patriotism, Style, Character, Pride, Courage, Conclusion. All of these relate to an important aspect of that concept we call America, and all have been powerfully displayed in the movies. The first version consisted of way over 100 clips that added up to about 5 minutes of screen time.

When this rough cut was shown to NATO representatives, they liked the concept, but felt the film was too long to be shown at the beginning and in between of their feature films. (Apparently none of them remembered the cartoons and short features that audiences loved back in the 30s and 40s!) And so, it was back to Chuck Workman to decide what to cut. One of my favorite suggestions was among the rejects, a clip from the impressive barn-raising sequence in Witness, which I thought  demonstrated the spirit of cooperation of Americans in helping neighbors.

The version that NATO agreed to show had a running time of 3 minutes and 10 seconds. It is book-ended with the famous shot in which John Wayne’s Ethan Edwards is silhouetted in a doorway, making for an effective beginning and ending. The clips run from a couple of seconds to 5 or more, sometimes with dialogue or a song running beneath subsequent clips. The films run from the silent era’s Birth of a Nation (1915) and The Big Parade (1925) through the 30s (42nd Street, Gone with the Wind, Mr. Smith Goes to Washington, and more) and on into the latter half of the 20th century. The total clips number 121, from about 110 films (several films include two clips).

I don’t know how theater audiences reacted to the film, but when I began my film workshops with the film, the reaction was enthusiastically positive. Mike and Chuck had achieved their goal. As the pandemic has spread throughout our nation, watched it again, and thought it might still lift up discouraged spirits. When I contacted Mike, he agreed, and got in touch with editor Chuck Workman. We agreed to send out the current copy I have via various media and that Chuck would consider updating the film so more recent ones could be included.

Thanks to my film producer and archivist friend Bob Campbell I have come across a 2001 BBC story that includes even more information on how Spirit came to be. Click here to read it.

Michael Ray Rhodes  is a seminary-trained filmmaker who has received several Emmy’s for his television work.  He worked with Fr. Ellwood “Bud” Kieser for many years as a producer and director–you will see his name in the credits of a great many of the Insight short dramas–directing 20 of them. He served as a producer on the Paulist feature film Romero, and directed ENTERTAINING ANGELS: The Dorothy Day Story and The Fourth Wiseman. He also directed episodes of China Beach, Christy, Beverly Hills 90210, and numer- ous others, plus the TV film The Juggler of Notre Dame. He is the founder and head of FILM CLIPS, a company providing clips from Hollywood films dealing with values and ethical issues, used in many U.S. school systems.

Chuck Workman has a long history of directing and editing films and film trailers. If you are a fan of the Oscar Awards show, you probably have enjoyed the marvelous film montages shown throughout the program–he created them for 20 of the shows, beginning in 1990.  His theatrical short, “Precious Images,” made for the Directors Guild of America, was given an Academy Award for Best Live Action Short . (It can be seen on YouTube, as can his exciting “100 Years at the Movies.”)