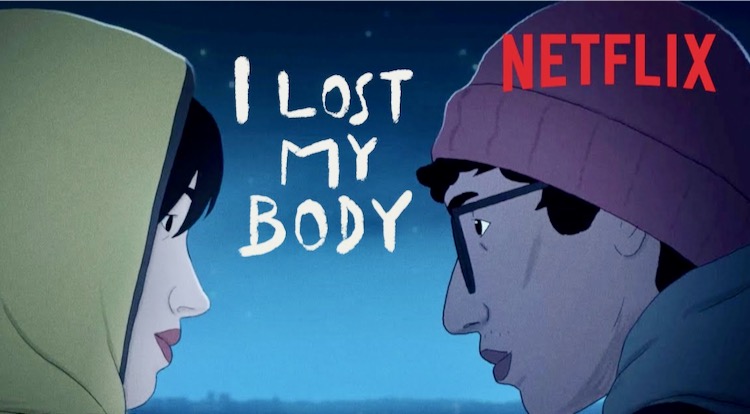 Your eyes saw my unformed body;
all the days ordained for me were written in your book
before one of them came to be.

French director Jérémy Clapin’s inventive I Lost My Hand is his first  film. Though it is animated, it is not for children, though with adults present to talk it over, I believe older children will find it appealing to their imaginative minds.  The title refers to a severed hand, but this is not a horror story. Instead, it is a quest film—in two senses, that of the hand seeking to reunite with its body and that of the young person to which it belongs seeking his place in the world. Based on Guillaume Laurant’s 2006 novel The Happy Hand, the film is one of the most original animated films that I have seen. In a way it is a love story, but one that does not end in the conventional way.

The film moves back and forth between two narratives, first that of the hand in a hospital laboratory where the hand creeps out of the storage refrigerator, managing to free itself from a plastic bag; and in the city streets of Paris where

The action unfolds in two narratives. One is at a hospital laboratory where a severed hand creeps on its fingers out of the refrigerator, frees itself from the plastic bag, and manages to escape from the room, and the other in the city streets where a teenage boy named Naoufel (Hakim Faris) is on his motorbike delivering pizzas and has an accident. This delays him again, adding to his long list of costly late deliveries. This time it is to the apartment building of Gabrielle (Victoire Du Bois), so upset by his tardiness that she refuses to buzz him though the downstairs door. They banter back and forth through the intercom. The boy leaves hoping to see her again.

As the hand, crablike, makes its way through the city streets, we go back forth between its narrow escapes in a subway and inside a garbage truck and the search of Naoufel for Gabrielle, the boy eventually taking a job at the carpentry shop of the girl’s uncle. There are black and white flashbacks to the boy’s childhood when he tells his musician mother that he wants to be a musician and an astronaut. There is an extended conversation with his intellectual father about how to catch the fly the boy is obsessed with. After their deaths Naoufel is raised by an indifferent uncle, the youth’s once lofty ambitions reduced to those of a pizza delivery boy. Memories of his caring parents are revived by the tapes he plays when alone, the tape recorder on which he had recorded their voices being one of his prized possessions he had taken with him. How these two stories converge makes for exhilarating viewing.

The 2D animation is a wonder to behold, giving us an unusual view of street activity from about two inches above the sidewalk—and at other times, as when the hand grasps a wind-blown umbrella and is swept high up into the sky and we see the streets and rooftops far below. I have read that it was the first animated movie to win the Critics’ Week Grand Prize this year at Cannes. As you will see, it is a film worthy of such honor.

Twin narratives of a severed hand on a mysterious journey through Paris & a pizza deliverer searching for the girl who refused a late delivery converge.
Editor Rating ★★★★★4.5 out of 5
More Details