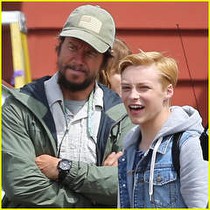 
“Come to me, all you that are weary and are carrying heavy burdens, and I will give you rest.”

Director Reinaldo Marcus Green, who dealt so ably with the black minority in Of Gods and Men, takes up the cause of another oppressed minority in his new film. It is the oppression of homosexuals. So it is appropriate that the screenplay, “based on a true story,” was written by the same team that wrote Breakback Mountain, Diana Ossana and Larry McMurtry. Like that film, this road trip story unfolds also across several Western states.

As we follow a man trudging along a highway, sometimes pushing a small 3-wheel cart, we gradually see that the writers’ have incorporated a touch of The Sixth Sense into the telling of the story. The grizzled looking man is Joe Bell (Mark Wahlberg) from La Grande, Oregon, father of 15-year-old Jadin Bell (Reid Miller). He is on a walking crusade from his home to the distant New York City, and in between he stops at anyplace where a group is willing to listen to his plea of tolerance for those who are “different.” At times he is not very effective, as we see early on when he haltingly speaks at a high school assembly. Often we see Jadin with him, calling him on a disappointing incident that has just taken place at a restaurant. Overhearing a man slam gays, Joe walks over to the booth to confront the offender, but instead of engaging deeply, simply gives out his card and a few words of protest. This half-hearted gesture is not what Jadin wants. We also see in a father-son exchange why New York City is Joe’s destination. That is where Jadin had told him he hoped to settle in, a place large enough where he would not be singled out as an undesirable.

Half the film consists of flashbacks to La Grande, some of them centering on Joe and family; others on Jadin and his classmates at school where a claque of jocks seem to have made it their mission to make life a hell for “the queer.” Early on, when Jadin talks with his father about the bruises he has received and Joe simply responds that he has to stand up to the bullies and they will stop, the boy has to come out of the closet to explain why they will not quit. Joe does not reject his son, but his response is not very supportive either. There will be times when the quick tempered father seems more concerned with their standing in the community, as when he spots Jason and a girl member of the cheer leading team practicing in their front yard and he demands that they go to the rear of the house. One night as they are sitting in the bleachers watching the school’s football team, the cheerleaders, Jadin among them, come out for a routine, and the crowd jeers Jadin. The embarrassed Joe and his wife quietly leave.

Joe’s walk is picked up in several places by TV reporters, which helps greatly in his securing invitations to speak. The most moving incident occurs when a sheriff (Gary Sinise) stops Joe and during his questioning declaring he must be hungry, takes him and feeds him. During their get-acquainted conversation the sheriff reveals that he too had failed the father test with his gay son, the boy ultimately committing suicide when he gave in to despair. The dialogue is spare, but the emotion is as deep as the ocean! It is shortly after this moment of two fathers bonding through their remorse, grief, and desire to atone for their past, that Joe’s journey comes to an unexpected end. We expect it to follow the usual arc of such stories with our scarred hero battered but wiser, but, as reminded at the beginning, the film is based on “a true story.” I was glad that I began watching the film with no knowledge of the real Joe and Jadin Bell, and I advise you not to read about its making until after you watch it.

This is a good film for groups to watch and discuss the issue of relating to a gay family member, one equal in its impact to Boy Erased or The Miseducation of Cameron Post. That the church is complicit in the bullying of LGBTQ people is emphasized in the scene wherein Joe talks with patrons of a gay bar. A man sorrowfully talks about his church at which his pastor preaches a sermon denouncing gays. Feeling totally rejected, he left, never to return. The film never goes into the particulars of the church’s rejection, based on misinterpretations of a few passages in the Bible, but it is powerful in showing the effect of such preaching.

The film is powerful too in its depiction of a man coming to grips with his flaws, even after he has decided to atone for his past by setting out on the walk across America. Jadin questions and challenges his father. Wife Lola hits home when she even questions his motives for the walk, suggesting that despite his FaceBook fame and subsequent news coverage he has not changed his quick-tempered nature. Joe thus is depicted as very much a work in progress. Which raises the question, “Aren’t we all?” Especially when it comes to the matter of so-called “straight” people’s attitude toward and relationship with a gay person. Filmmakers Reinaldo Marcus Green, Diana Ossana and Larry McMurtry have given us a true visual parable in that, just as in regard to the stories of the most inclusive man who ever lived, we are challenged to examine ourselves and purge any tendency to divide those whom we meet into the acceptable and the rejects.

A small-town man sets forth from Oregon to walk to NYC to fight on behalf of his gay son against LGBTQ bullying.
Editor Rating ★★★★★4.5 out of 5
More Details