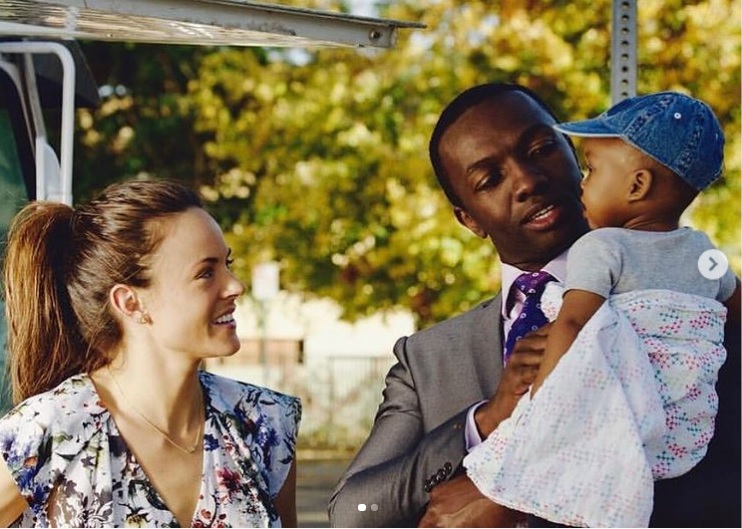 But Thomas (who was called the Twin, one of the twelve, was not with them when Jesus came.  So the other disciples told him, “We have seen the Lord.” But he said to them, “Unless I see the mark of the nails in his hands and put my finger in the mark of the nails and my hand in his side, I will not believe.”

Will McFadden’s film is about trust as well as systemic racism, making it of double interest. The story involves a young white couple, Jen and Tom, and their best friend, Ron, a black bachelor who works at the same law firm as Tom.

Tom (Will McFadden) and Jen (Sarah Butler) are deeply in love, with Tom so committed to being the perfect mate that he shows up at their Lamaze class even when Jen doesn’t. However, he is late for the birth due to bizarre circumstances, but Ron does make it. By the time Tom arrives, Ron knows the surprising results of the birth, but has difficulty revealing it to his friend. Only as Tom gazes upon the infant does he realize his son is black!

Tom’s initial expression of joy dissolves into shock and then disbelief and displeasure. No way! How can this be?! Jen, who insists that she has been faithful, hypothesizes that maybe there is a recessive gene from one of their ancestors who had had a liaison with a Black person. She suggests that she submit to a DNA test, which Tom, hesitating for a moment, rejects. But later the suspicion gnaws at him that maybe Ron has betrayed him.

The reaction of friends and acquaintances often prove embarrassing. Some jump to the conclusion that the black infant is adopted, their praise of the nobility of the act failing to compensate for the hurt of the assumption. Even strangers whom the three encounter jump to wrong conclusions.

Alone at night with his laptop Tom searches the internet about the odds of a Caucasian couple siring a black baby. Then as his inability to accept the infant as truly his, he starts typing in “signs that my wife is cheating on me.” Like a monster wreaking physical havoc, Tom’s “doubting Thomas” spoils his relationships, first with Ron, and then with Jen. We also see in his rejection of the baby how racism is embedded in him, even though as a liberal he had been “best friends” with a Black man.

The explanation for the baby’s skin color eventually emerges from Jen’s parents, Kate (Melora Walters) and Bill (James Morrisson). Actually, from Kate—she has kept a traumatic part of her past secret even from her husband. I think you will find this portion of the film deeply moving. Working with the director, writer Joseph Campbell based it on a true story from his family’s past.

Together the director and his writer friend seem to have taken current headlines about racism and woven them into an up-close and personal tale. They have left the film open ended, much as the story of what is happening today is open ended. Can there be reconciliation and restorage of relationships? Can the corrosive effects of racism be overcome? How can even liberals claiming “there is not a racist bone in my body” overcome their delusions? Clearly, we need such films as this one as America struggles up the steep hill to reach Dr. King’s goal of “the Beloved Community.”

When Caucasian Jen & Tom birth a Black baby, Jen is accepting but Tom is filled with doubts about Jen & their Black best friend Ron.
Editor Rating ★★★★★4.5 out of 5
More Details