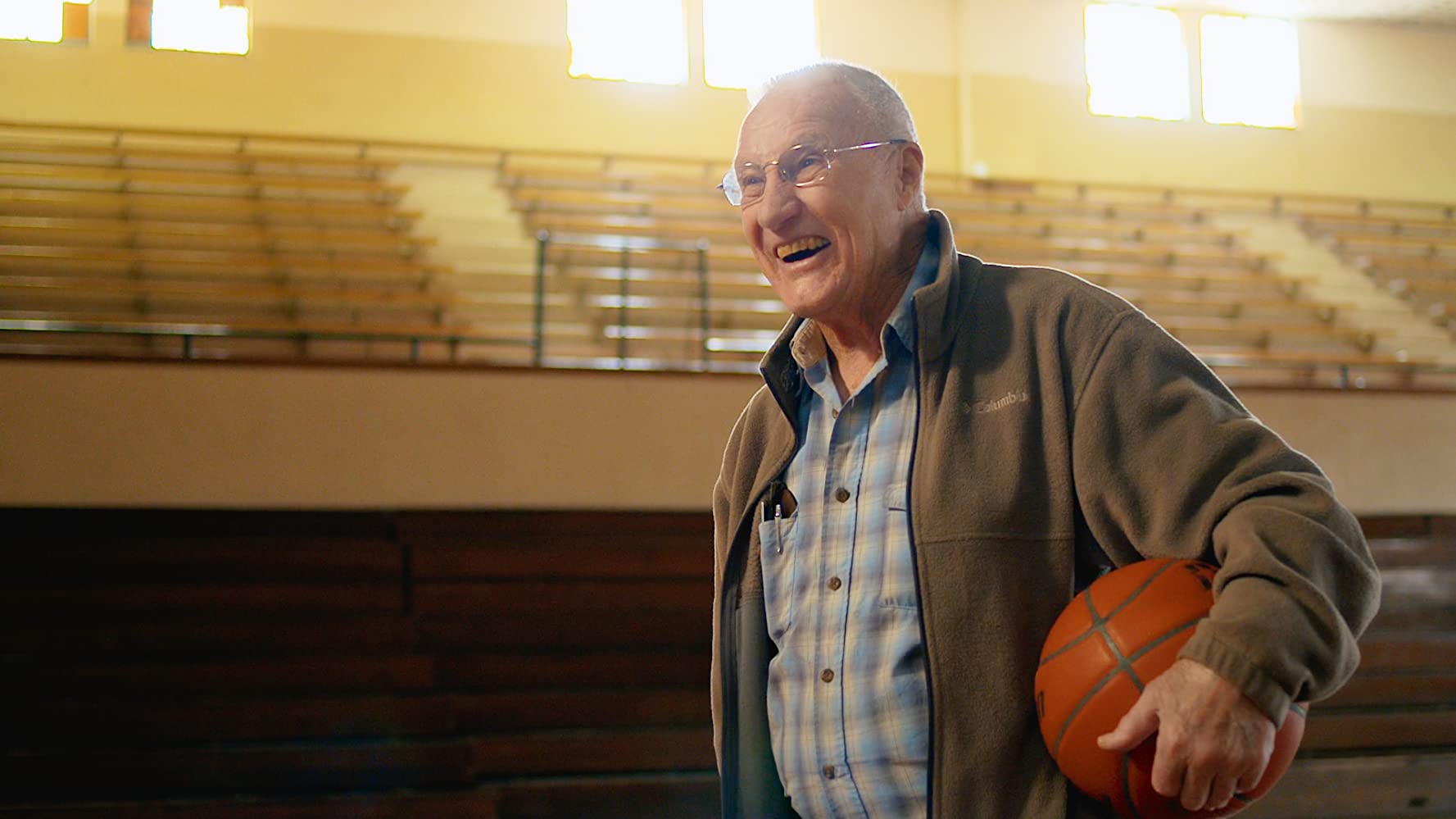 For by grace you have been saved through faith, and this is not your own doing; it is the gift of God— not the result of works, so that no one may boast.


Don’t let the world around you squeeze you into its own mould, but let God re-mould your minds from within, so that you may prove in practice that the plan of God for you is good, meets all his demands and moves towards the goal of true maturity.

The old saying that Necessity is the mother of invention was certainly true for Kenny Sailors. Growing up with his brother Bud on a farm near Hillsdale, Wyoming, Kenny played basketball with his older brother, using an iron rim nailed to their windmill as a hoop. Unfortunately, he was 5” 7” and his brother way 6’ 4”. So, after his brother continually blocked his shots, Kenny used his jumping ability to shoot over Bud’s head and score. (With his strong legs, he would go on to excel in track, winning the state championship in the broad jump during his high school senior year.) Bud told him it was a good shot, and that he should work on it. He did, and so when Kenny played in high school and college, his jump shot was so unorthodox that it literally left his opponent flatfooted on the ground. Such are the stories that documentarian Jacob Hamilton has spent 7 years uncovering for his film about how Sailors began his basketball career, rose to national prominence, and then faded from sight when he moved to Alaska. It consists of a number of David and Goliath stories that should be just as interesting to non-sports viewers as it is bound to be to those infected with the annual “March Madness.”

As the front credits come on, we hear echoing footsteps, and eventually see a 91-year-old man walk into an gym, empty except for a basketball on th floor. The man stoops down to pick up the basketball, dribbles it—quite well—and then bounces the ball hard onto the floor and scores a basket on the rebound. Pretty good for a nonagenarian! He does not try the jump shot which the rest of the film credits him for inventing, but he does proceed to talk about his life, doing so with considerable modesty and an occasional touch of humor. Today the jumps shot is integral to the game, but when Kenny was young, it was a ground game with players passing the ball until one was clear for a shot.

Kenny was 13 when he first used the maneuver against his brother, and it took several years for him to perfect the shot. He explains that when he first began jumping his momentum from running carried him forward into his opponent, resulting in a foul charged against himself. He learned how to come to a standstill so he could jump vertically, with his arm and elbow in the right position to make the shot. As one of the athletes admiring a photograph of him in action says, his jump shot was “a game changer,” becoming so much a part of the game that people forgot that there was a time before the jump shot. There is even an amusing shot of one sports reporter’s column lamenting the jump shot, his complaint being that it was” ruining the game.”

Over the last four years of his life, up to his death just a couple of weeks after his 95th birthday, Kenny made himself available to the director/co-writer/cinemaphotographer. By interspersing lengthy shots of Sailor’s dialogue with photos, home and sports footage,some clever drawings, and interviews with a bench full of basketball legends, Jacob Hamilton has created a lively film. His interviewees include Stephen Curry, Kevin Durant, Dirk Nowitzki, Clark Kellogg, Bob Knight, Nancy Lieberman, Lou Carnesecca, Kiki Vandeweghe, two of his grandchildren, and others. Stephen Curry, who also served as an executive producer, appears the most, expressing his astonishment at Sailor’s youthful prowess on the court. So do others as they look at a LIFE Magazine photo of Kenny, several feet above the court and the head of his opponent, about to launch the ball onto its score-pointing trajectory.

The LIFE photo was taken at Madison Gardens in 1946, three years after Kenny, captain of his University of Wyoming team, led his fellow players to victory in the NCAA Basketball Championships. That championship game was another touch of the David vs. Goliath theme, with sports experts expecting St. John University’s championship team to beat the country boys. They didn’t, and Kenny was launched onto the national stage. But World War Two was raging, and within a couple of weeks he and his teammates were in uniform. The film offers few details of his wartime experience, except to tell us that he was a Marine stationed in the Pacific. His sports leadership skills must have transferred easily to the military because he emerged from the war as a captain. He married his school sweetheart  Marilynne. (There are many shots of the attractive woman in her cheerleading and majorette costumes and later caring for their children or as his companion in old age.) He returned to the University of Wyoming and played on the team, winning numerous honors, including MVP. He played professionally for a few seasons, going against the “wisdom” of one of his coaches who told him his jump shot had no place in basketball. He also was told not to dribble so much, that he should conform to the current strategy of quickly passing the ball around to teammates. Kenny paid no heed to such off-setting advice, which may have been why he moved about so much.

The player retired to a Wyoming ranch because of Marilynne’s poor health. The couple moved to Alaska for the same reason. For 33 years they earned their living as hunters and guides. Kenny also taught and coached in that state at Glennallen High School, indeed pioneering the development of women’s basketball in the state. There was no girls’ team at the time at Glennallen, and so for the sake of his daughter, Kenny started one. At the time Alaskan young women played half-court basketball because it was thought they were too delicate. Kenny knew better and opened theirs to full-court play. Several of the female players testify to his great influence, one of them saying that after school she tried things she never would have but for her coach’s opening her up to new challenges.

After 59 years of marriage, Marilynne died, and Kennedy moved back to Laramie, Wyoming, where he lived near his Alma mater’s sports center. He frequently attended the games, where, because of his past achievements, he was greeted with acclaim. The rest of the country might have forgotten his glory days, but not the people of Wyoming.

Much is made of Kenny’s omission from the Basketball Hall of Fame, with one sequence in which the secret vote is being taken, and Kenny receives the disappointing news by telephone. He takes the rebuff well, several times in the film stating that basketball is not the most important thing in his life. He even downplays his famous jump shot. At one point he jokes about suing the NBA for $5,000 for the use of it.

Everyone interviewed in the film that speaks about the Hall of Fame agrees that it is incomplete without his inclusion, so maybe this film will add to the pressure of his many supporters to include him in a future vote.

In the meantime, we have this inspiring testament to remind us that a person is more than any sport or job that he has held, no matter how successful. From his words and those spoken by others, many who know him only by photos and film clips from his games, a man with a warm and caring heart emerges. I chose the Ephesian passage for the Scripture link because its words are inscribed on Kenny’s gravestone. Besides this testimony to his faith is the incident recalled by a friend while he and Kenny were watching the final four teams play in the NCAA tournament, and he asked, “Hey Kenny, who’s in your Final Four?” Expecting Kenny to list four teams, he responded instead with, “God, husband, father, US Marine. That’s my Final Four.”

Like all good sports films, Jacob Hamilton’s is not just about a sport, but about a human being, in this case a man and his values and what he leaves behind. This is a film you will not want to miss! And be sure to stay with the end credits so you will see the clip of the unveiling of a heroic 22-foot statue and hear further tributes to this good man. Perfect ending.

The film will premier online April 16-18 at http://JumpShotMovie.com, with 10% of the proceeds going towards Covid-19 relief.

For more details of Kenny Sailor’s life see the  article “Birth of the Jump Shot” by Brad Botkin on site of NCAA BB.

No reflection and/or discussion for this film

The story of the inventor of basketball's jump shot, from Kenny Sailors boyhood days in Wyoming to his championship days, marriage, retreat to Alaska, & his admirers' campaign to get him in the Hall of Fame.
Editor Rating ★★★★★5 out of 5
More Details