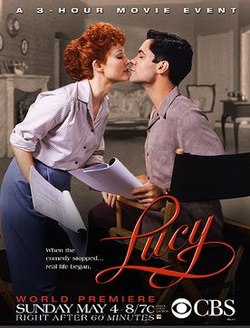 One’s own folly leads to ruin... 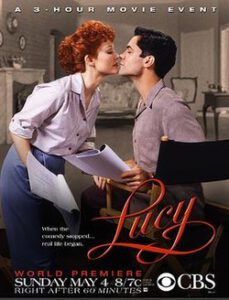 This made for TV film will expand the story of Lucille Ball for those who enjoyed the recent Being the Ricardos. Whereas the latter film dealt primarily with one week in filming the “I Love Lucy” show, with flashbacks filling out the story, this one attempts to cover 35 years of her life and career—though the version of the film we see on Amazon Prime is a cut-down version of what originally was billed as a three-hour film. (Amazon Prime says it is 1 hour 34 minutes, and Wikipedia clocks it at 2 hours 8 minutes.) But even this pared down version is fun to watch.

The film is book-ended by scenes set in February 1960 when the last episode of the The Lucy-Desi Comedy Hour,” is being filmed before a live audience. Backstage a beleaguered page is sent scurrying back forth by the stars, each insulting the other while asking if they are ready to go on stage. Vivian Vance and William Frawley who play the Ricardo’s contentious friends comment on the pair’s feuding. At last, the stars emerge and face the adoring audience as if they were the lovey-doveys depicted in the show.

We are taken back to 1925 where the free-spirited teenaged Lucille Ball lives with her family, including her beloved grandfather. There unfolds the story of her family’s financial ruin, her years in New York as a model and Goldwyn Girl, her move to Hollywood and unsatisfying work as a contract player at RKO Pictures where she meets and eventually elopes with the young Cuban bandleader Desi Arnaz. She has brought her family to live with her and hired a Black woman named Harriet who seems to be as much as a friend as a maid. She becomes a close friend of actress Carole Lombard.

RKO cannot seem to find her proper place amongst its stable of actresses, so Lucille is let go. She signs with MGM and stars with comedian Red Skelton in DuBarry Was a Lady. During this time Desi resents being called “Mr. Ball” and continues his premarital habit of flirting, drinking, and gambling. MGM also lets Lucille go, and then comes the pivotal moment in her career when the legendary comedian of silent films Buster Keaton becomes her mentor, along with Skelton. Both point out that she should be a comedienne, with Keaton teaching her about timing. She practices in front of mirrors the hilarious facial expressions she became famous for.

With her success in radio and move to television, the film, as well as her career, moves into high gear. Although not as well dramatized as in the later film, we are shown her fight with the prejudiced CBS executives over casting her Cuban husband as her TV spouse. And in an all too brief scene we see that it is Desi who came up with what was then a revolutionary technique—shooting before a live audience using three cameras, rather than the usual Hollywood custom of using one camera at a time to film medium, long, and close-up shots, thus saving valuable time. I wish that as much time was given to depicting Desi’s business skills as to his adulterous binges, although I believe he is given credit for retaining the rights to the film negatives—which would prove a bonanza for the DesiLu studio when the show made the rerun circuit. The CBS suits did not believe the series would be a success, not realizing what a creative couple they were partnering with.

Like Nicole Kidman, Rachel York does not at first look like Lucille Ball—until she re-enacts some of the iconic moments of the TV show—the chocolates on the assembly line, the grape-stomping fight, her Vitametavegamin pitch or the moment when Ricky discovers that his wife is pregnant while performing before a nightclub audience. (According to reviews of the full film, the Red Scare days when Lucy was accused of being a Communist are covered, but this is left out of the currently streaming version, darn it.) With her dyed red hair pinned up and mugging before a mirror, York becomes the comedienne—she is that good.

Danny Pino also does not look like Desi Arnaz, but his accented speech and his singing are up to par. I had not realized that his family had been so well off in Cuba before they had to flee from a dictatorship. Classism raises it ugly head when Desi’s mother says, following her first meeting with Lucy, “She doesn’t have much elegance.” It is a tribute to the son’s character that he sets this aside. If only he could also have done so with his Latin machismo, rather than being an example of what the writer of Proverbs taught.

It is good to have this additional take on Lucile Ball and Desi Arnaz, but I wish that we had been given the entire film. As it is, there is lots to commend it.

Lucille Ball & Desi Arnaz's story, from 1st meeting at RKO in the 20s to their hit TV sitcom and the infidelities of Desi that led to their breakup.
Editor Rating ★★★★★4 out of 5
More Details