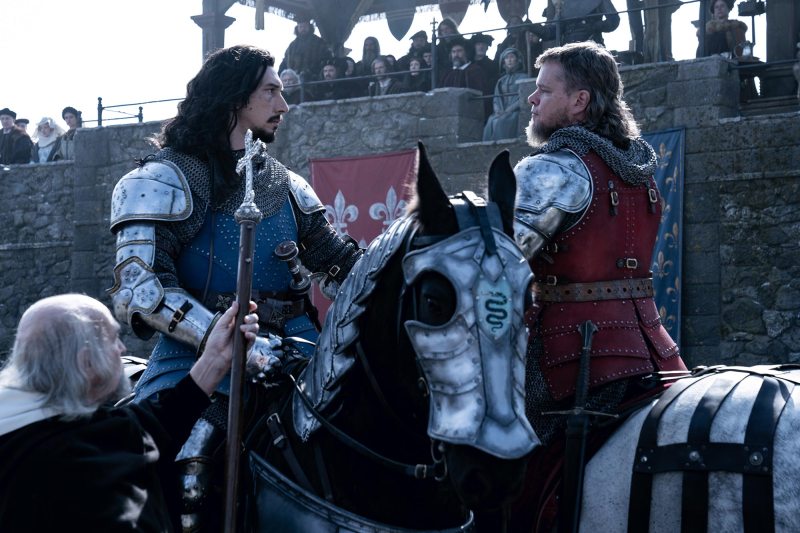 Wives, be subject to your husbands, as is fitting in the Lord. Husbands, love your wives and never treat them harshly.


But he who commits adultery has no sense; he who does it destroys himself.

Director Ridley Scott may have entered his 8th decade, but this film, his best period piece since Gladiator, shows that he has not slowed down artistically. And the screenplay is the result of stars Mat Damon and Ben Affleck (remember Good Will Hunting?) reuniting as writers, joined by Nicole Holofcener, the result being a heart-pounding bringing to life of the book by UCLA Professor Eric Jager The Last Duel: A True Story of Trial by Combat in Medieval France. Although the title is not quite accurate, the story strips away the naive romantic view of the Middle Ages fomented by the old Hollywood epics of the 40s and 50s and reveals both the brutality of the era in which the strongest and most savage of men gained riches and rank by violence and the misogynistic views of society and the church prevailed. In regard to the latter, it would seem that the Christ depicted in the Gospel of Luke as lifting women up above their low status never existed.

Based on true events that took place during the Hundred Years Wars, the story centers on squires in 14th-century France, Jean de Carrouges (Damon) and Jacques Le Gris (Driver) serving in the army of the teenaged King Charles VI (Alex Lawther). At the Battle of Limoges Jean saves the life of Jacques. However, the latter finds favor by the aristocratic Count Pierre d’Alençon (Affleck) and Jeans’ incompetence in managing his estate sink him into debt. He seeks a way out by marrying Marguerite de Thibouville, thereby receiving a handsome dowery of land and money. However, the liege of the two, Count Pierre d’Alençon (Ben Affleck), disliking Jean, gives part of the land of the dowery to his favorite, Jacques, along with a captaincy once held by Jean’s father.

Jean sues to regain his losses, but loses. Following the wise advice of Marguerite, Jean when he takes her to a nearby wedding feast reconciles with his rival. Jean leaves for a war in Scotland, ordering that Marguerite never be left alone at the castle. Jean’s mother Nicole (Harriet Walter) decides to go into town for business and insists on taking everyone, even Marguerite’s lady in waiting. Alone, Marguerite is hesitant to open the door, but the knocker pleads he needs help. When she does, Jacques forces his way in. Smitten with admiration and love, he is convinced she will yield to her charms. She flees up the stairs, but he chases her down and despite her protests, rapes her. She tells no one until her husband comes home. Once he is convinced she is telling the truth, he demands justice. Receiving none from Count Pierre, he petitions the king in Paris, and at long last is granted his wish for trial by combat, the theory that God would show who is the just one by whoever won. Before a huge audience of nobility and Parisians the brutal duel takes place, first on horseback with lances, and then when both horses are killed, on foot.

The film is divided into three chapters labeled as “the truth according to. “The first tells the story from Jean’s point of view, the second from Jacques, and the third from Marguerite’s. This is not quite a Rashomon take-off, but each segment does include important details one would expect the teller to include as well as those overlooked by the other two. Chapter One provides more of the gory details of the brutal battles of Jean, his hard negotiations with Marguerite’s father, and his humiliating dealings with Jacques and Count Pierre. The account of the rape will be the same as we see in Marguerite’s account. Jean in this part is much more of a war hero, the epitome of fearsome warrior held up for emulation and inspiration by the bards, whereas in the next part he becomes the object of mockery.

Part Two, from Jacques’ viewpoint, shows how the Latin-spouting squire ingratiates himself with the debauched Count by his witty conversations and the straightening out of his lord’s chaotic finances. The Count, though his married wife is pregnant, loves his wine, women and songs, and several times says to Jacques from his bed full of nubile women, “Get in here and take off your pants. “Only in this section do we see Jacques’ exchange with Marguerite while they are alone at the food-laden table filling their plates at the wedding. He is impressed that she is literate and conversant in various books. Obviously he wants more of her when they have to part. The rape depiction is almost the same as his victim’s, except that we see her taking of her shoes when she runs up the stairway, rather than them slipping off from the violence of her running. We see his confessing to a priest—for adultery, not rape. The Count assures him that he will dismiss the charge, so Jean starts a rumor campaign and petitions King Charles for a trial. Another priest tells Jacques that the trial is not really about Marguerite, “Rape is not a crime against a woman; it is a property crime against her male guardian. In this case, Jean de Carrouges.” Wow!

In Marguerite’s part we learn more about her daily life, including her talking with her friend Tallulah Haddon. She will regret some of their conversations because the so-called friend will become a witness against her. We see that she is a courageous person: when warned that if her husband should lose the duel, she will be seized and burned to the state. Told that it could take 15 or 20 minutes to die in the flames, she declares, “I will not be silent.” We also see perhaps the saddest of the scenes in her conversation with her unsympathetic mother-in-law Nicole de Carrouges about the trial. says, “I am telling the truth. “Nicole, revealing a dark secret of her own past replies, “The truth does not matter.” (It is interesting to note that this section is attributed to Nicole Holofcener.)

The duel itself is staged in great, realistic detail as the men batter at each other with sword and battle-axe. It should satisfy those who relish this aspect of sword and armor epics. I am glad I had not yet looked up the names of the characters and learned of the outcome. At the film’s concluding screen notes we are left with two notes of ambiguity—that of whether or not Jacques really believed in his protestation that their sexual union was consensual. The second I will leave for the set of questions so as not to spoil the outcome of the story here.

Besides the director’s great skill at epic story telling we have the cinematography of Dariusz Wolski. Instead of the bright, cheerful colors of the old medieval classics of the Fifties, such as Knights of the Round Table or Ivanhoe, the colors are washed out, the gray of the castles and the white of the snow dominating the palette. Above all, the skill of the actors playing the major parts bring the characters to life, with Mat Damon shifting ever so slightly his depiction in the three chapters. best of all is Jodie Comer as the woman who “will be silent,” thus displaying a greater courage than either of the men on the battlefield, given the consequences for her if her husband does not win the duel.

The story took place over six hundred years ago, and yet some of its macho patriarchal values persist, and these are supported by the misuse of certain Biblical passages. Men in power still force their way upon “the weaker sex” in the belief that a woman can be owned. We still hear abusive men claim that their sexual unions were consensual. And so on. What we come to realize in the third chapter, wherein Marguerite emerges as a background character claimed by two men, is that the she actually is the dominant character. In case we don’t get this, we have the statement issued by the three screenwriters:

“This film is an effort to retell the story of a heroic woman from history whom most people haven’t heard of. We admired her bravery and resolute determination and felt this was both a story that needed to be told and one whose drama would captivate audiences the way it moved us as writers. As we further explored the story, we found so many aspects of the formal, codified patriarchy of 14th century Western Europe to still be present in vestigial ways (and in some cases almost unchanged) in today’s society. We chose to use the device of telling the story from several character’s perspectives in order to examine the immutable fact that although often multiple people who experience the same event come away with differing accounts, there can only be one truth.

Those interested in the history behind the film can read the Wikipedia article “Jean de Carrouges. And, by the way, this article points out that there was one more such duel fought—in 1547.

Two noblemen in 14th century France fight a duel when the wife of one accuses the other as raping her, the crime seen as against the husband!
More Details