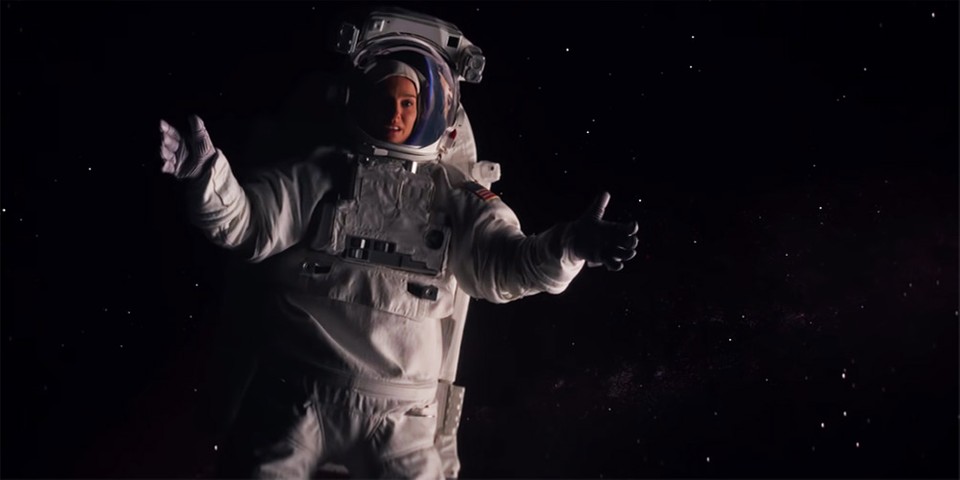 The eye of the adulterer also waits for the twilight,
saying, ‘No eye will see me’;
and he disguises his face.

We are so used to seeing astronauts portrayed in heroic terms that it seems almost shocking to see Noah Hawley’s film in which two of them are not straight arrows. This “inspired by real events” is a story of adultery, envy, and would-be assault that includes both deep space special effects and earth-bound fractured relationships. And it is a story of being raised up to a transcendent experience and then dropped back into a mundane earth-bound life.

Astronaut Lucy Cola (Natalie Portman) is like the farm boys sent as soldiers to Europe during WW I in a song of that period with its line “And how ya gonna keep ’em down on the farm/After they’ve seen Paris?” In the opening segment spacesuit-clad Lucy, working outside the International Space Station is thrilled by the specter of the Earth rotating below and the brilliance of the stars against the blackness of space. When told over the intercom she must come back in she begs for “just a few more minutes.”

Upon returning to Earth Lucy is intent on returning to space, so she signs up as a candidate for the next trip. In the meantime, there is her family to reintegrate into her life. Husband Drew (Dan Stevens) is depicted as a loving husband who also works at NASA, and there is her daughter Blue Iris (Pearl Amanda Dickson). They may need her, but she has a greater need for space. She is a member of an elite group of men (and now women) who have sat atop a cylinder of a roaring volcano that hurled her far enough to see the whole planet. As she says to fellow astronaut Mark Goodwin (Jon Hamm), “You go up there, you see the whole universe, and everything down here seems so small.”

As she goes through debriefing and then training, she feels so alienated from her family that she enters into an adulterous affair with the divorced Mark. Then, when he loses interest in her and takes up with the younger woman astronaut Erin Eccles (Zazie Beetz), Lucy begins to unravel. Her sexist treatment by her superiors—one tells the woman who hitherto has performed dangerous and complex feats in space that she is too emotional—adds to mix of illicit sex and a climax that is as bizarre as the real-life astronaut (Lisa Nowak) it is based on.

The mental and moral disintegration of Lucy Cola/Lisa Nowalk is a tragedy that the film makes one wonder if her gender was a major factor in her breakdown. The film shows there is no doubt she was treated differently. Women were “hidden figures” in NASA’s early years, and when they finally were accepted as astronauts, their climb was far steeper than that of their male peers. Mark was right when he said to Lucy, “I’ll bet you never came in second in anything.” There was no rocket berth for a woman who was not at the head of the pack of space applicants.

Despite its Oscar-winning star, the film has failed to gain a wide distribution, partly due to the critics’ negative reviews. It is not quite as bad as they say, but it is apparent that the change of name must have been a marketing ploy to cash in on the Beatles’ song. Yes, the song is employed deep into the film: you know, Lucy is addicted to space rather than psychedelic drug. This is not a film destined to find a place on the shelf of good NASA films, such as The Right Stuff, Ad Astra, or Hidden Figures. Nonetheless, I am glad to have seen it.

Loosely base on reality, this is the story of the breakdown of a married female astronaut, enthralled with space, but has a meltdown when her illicit lover falls for another astronaut.
Editor Rating ★★★★★3.5 out of 5
More Details