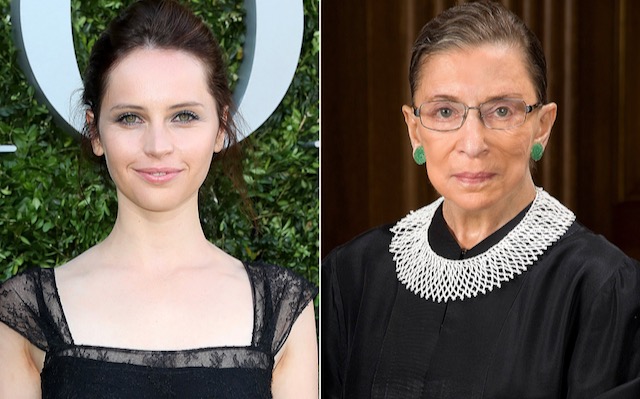 You shall not render an unjust judgment; you shall not be partial to the poor or defer to the great: with justice you shall judge your neighbor.

Wives, be subject to your husbands, as is fitting in the Lord.


She had a sister named Mary, who sat at the Lord’s feet and listened to what he was saying.  But Martha was distracted by her many tasks; so she came to him and asked, ‘Lord, do you not care that my sister has left me to do all the work by myself? Tell her then to help me.’  But the Lord answered her, ‘Martha, Martha, you are worried and distracted by many things; there is need of only one thing. Mary has chosen the better part, which will not be taken away from her.’

If you enjoyed the documentary RBG, about Supreme Court Justice Ruth Bader Ginsberg, then you should love Mimi Leder’s docudrama in which Felicity Jones plays the judge when she was a student and young lawyer. That we should catch a glimpse of her intimate married life was guaranteed by her nephew Daniel Stiepleman being the screenwriter. And just as it was stated throughout the documentary, we see what a great support her husband Marty (Armie Hammer) was throughout their life together. He truly was a man ahead of his times.

The scenes of her at Harvard Law School make us cringe, with the Dean Erwin Griswold (Sam Waterston) making it plain he did not think any of the nine women who managed to make it in were worthy of being there. In class a Professor Brown (Stephen Root) ignores her, refusing to call on her in class. Her determination to succeed is tested also when Marty becomes ill. She attends his classes, as well as her own, taking notes and going over her notes with him and typing his papers. When he does graduate and they need to move to NYC, the dean refuses to cooperate with Ruth in transfering credits to Columbia.

Ruth graduates at the top of her class, but none of the prestigious law firms will hire her. Her interview by one lawyer who seems sympathetic at first will also make you cringe. She has to settle for a teaching position at Rutgers where she tutors a group of eager young women. She argues with her teenage daughter Jane (Cailee Spaeny) over the girl’s cutting school so she can attend a a street demonstration. An encounter with veteran women’s rights advocate Dorothy Kenyon adds to her frustration. “The country isn’t ready. Change minds first. Then change the law,” Kenyon tells her, indicating that the action is in the streets, but Ruth argues back that without the law no change will be lasting. Her frustration flares up when she argues with Marty that though she is teaching the young lawyers who are demonstrating, she had envisioned herself as effecting change.

It is the ever-supportive Marty, now a highly paid tax lawyer who brings to his wife’s attention the key that will unlock the closed door for her. He drops a legal brief on her desk, which she at first rejects. He tells her to read this one, and when she does, she realizes that this is indeed the case she should pursue, even though it is a back door approach to securing women’s rights. It is a case in which a man is being wronged by the IRS. In Charles E. Moritz v. Commissioner of Internal Revenue, plaintive Charles Moritz (Chris Mulkey) is being denied tax benefits for his full-time care for his invalid mother because the law stipulates a caregiver as being a woman, and not a man. He has quit his job, but the government refused to give aid because he was a man. Discrimination flows both ways, it seems.

The case is a formidable one, and her friend and colleague at the ACLU, legal director Mel Wulf (Justin Theroux) at first argues against her taking on the case. By now Ruth’s former Dean is a highly-placed US government attorney, so we see him confidently warning that furthering rights for women will destroy the American family and values. In a delightful development that would seem too Hollywood to be true, Marty joins Ruth in arguing the case before the Supreme Court. He will speak about the tax law, and Ruth will argue the specifics of Mr. Moritz. It is a thrilling scene, especially when, as you see in the trailer, one of the judges tells Ruth, “The word ‘woman’ does not appear even once in the US Constitution,” and the much younger lawyer, refusing to be cowed, replies, “Nor does the word ‘freedom,” and then pausing for a moment for her words to sink in, adds, ”Your Honor.”

As the equally enlightening film Marshall concludes with young Thurgood Marshall’s early career, so Mimi Leder’s film end with Ruth’s first of five Supreme Court victories, all of which advanced the cause of gender equality in the U.S. We marvel at how a Fundamentalist view of the Bible permeated American society in the 1950s, so this is a good film to take our daughters and granddaughters to see. The patriarchal view of wives being subjected to husbands stems from s misuse of the New Testament letters, we should point out, and not from the Founder of the Christian faith—see how Christ favored a woman’s free choice in the story of Mary and Martha (Luke 10:38-41) It could be said that Ruth Bader Ginsberg  helped society to catch up with the Man from Galilee

This review is in the January issue of VP along with a set of questions for reflection and/or discussion. If you have found reviews on this site helpful, please consider purchasing a subscription or individual issue in The Store.

Ruth Bader Ginsberg fights against gender inequality at Harvard, in NYC, & then at the Supreme Court.
Editor Rating ★★★★★5 out of 5
More Details