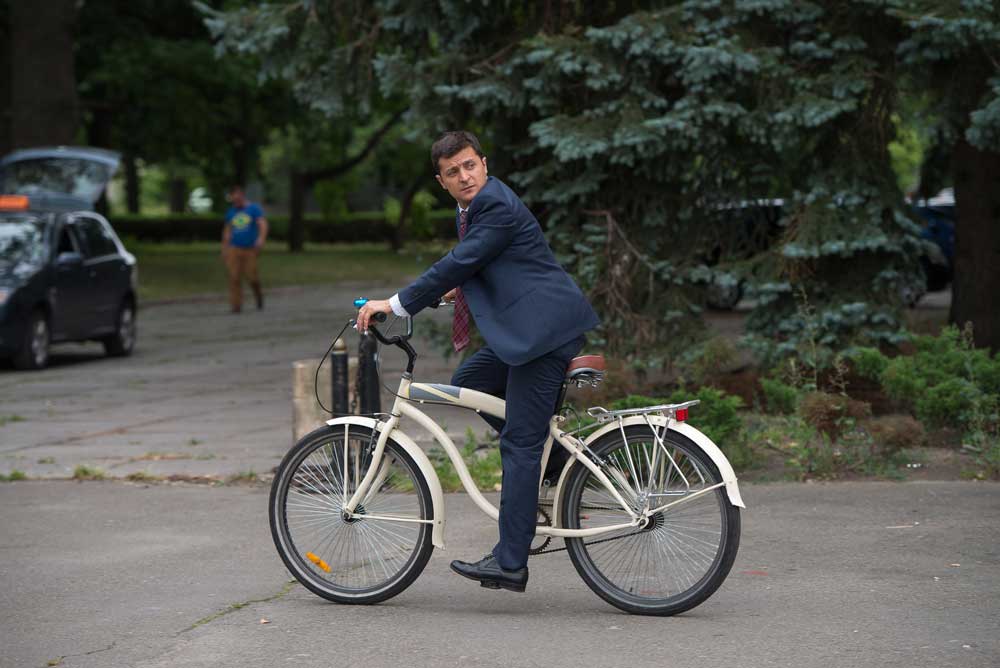 Run to and fro through the streets of Jerusalem,
look around and take note!
Search its squares and see
if you can find one person
who acts justly
and seeks truth—
so that I may pardon Jerusalem.

I have now seen all the episodes that constitute the first season of the hit Ukrainian comedy series Servant of the People. This life-imitates-art series is both flawed and truly amazing—not even the sometimes over-done humor can diminish my respect and sense of awe for its creator and star Volodymyr Zelenskyy. It’s hero, history teacher Vasiliy Petrovich Goloborodkowho who is not above using gutter language at times, is a good stand-in for the prophet Jeremiah, whom God instructs to search if he can to find one person who is not corrupt. The opening verse of Jeremiah 5 is precisely the dilemma of Vasiliy Petrovich Goloborodko, who is unexpectedly thrust into the Presidency of the Ukraine—as in Jerusalem for Jeremiah, can Goloborodkowho find in Kiev one person who is not corrupt?

As I reported in the last issue, this Mr. Smith Goes to Washington-like story centers upon a history teacher who is so fed up with corrupt politicians than after class one day he goes on an expletive-filled rant decrying corruption. Students outside the class window over hear him, and one of them records his rant and posts it on social media. It goes viral, with thousands of adult readers replying that they would vote for him. His loyal students pick up on this, raising money for his registration through crowd-funding, and before he knows it, security agents appear at his parents’ run-down apartment where he lives to escort the befuddled teacher to Kyiv’s seat of government to be presented as the new president.

I emphasized in my first report the New Testament Gospel’s “Great Reversal,” in which the first will be last, and the lowly raised up: with everyone suddenly kowtowing to the once low status teacher in the hope of eliciting favors from him. This time I want to stress more the strange, eerie feeling of prescience in the last of the episodes and the clever way that numerous historical personages are worked into the new president’s fantasies that come, some appropriately, during the night, but one right in the middle of a political debate being televised. Vasiliy is a history teacher, so such personages might be expected to arise and offer advice to him from their perspectives. In an early episode we see in Vasiliy Goloborodko’s hands a copy of Plutarch’s Lives, and the bearded, white robed Plutarch and Herodotus debate what kind of a leader Vasiliy should be, an autocrat or a democrat? Later Julius Caesar appears with advice–amusingly (in the fantasy that is) when he turns his back to Vasiliy, revealing dozens of daggers sticking from it. This latter should serve to warn the new President of the country’s Prime Minister Yuriy Ivanovich Chuiko (Stanislav Boklan). This suave politician pretends to be sympathetic but is really in league with the corrupt billionaires who have been running the government for their benefit since its inception. The camera often cuts away to these oligarchs as, amidst lavish food, drink, or a gambling table, they plot to thwart the upstart novice politician, consistently underestimating his integrity, intelligence, and persistence.

I mentioned last month the crucial appearance of Abraham Lincoln, whose integrity Vasiliy shares. “It was Lincoln who encouraged him to lay aside the lame Inaugural Speech his aides had prepared and speak from his heart. But his integrity is undermined by his own family, wanting to cash in on his position. His father and his ambitious sister for a while become his chief obstacles in his struggle against corruption. He declares at one point, “Here I am, battling those vampires, and at home I get the same foul soup, just reheated.”

Among the historical figures appearing to him are Che Guevara, Louis XVI, the Ukrainian leader Yaroslav the Wise, and for me, most presciently, 16th century Czar Ivan the Terrible. This is during a televised debate involving all the major political leaders that Vasiliy has his strange vision of confronting the cruel tyrant that seems to me so eerily prescient of current events. After haranguing the president about the need to brutally suppress an enemy, which Vasiliy resists, Ivan asks his name and ancestry. When Vasiliy gives it, the tyrant says that he once had a jester named Goloborodko, but that he had torn out his tongue. Shortly after Vasiliy reveals that he is Ukrainian, Ivan speaks of Ukraine’s domination by the Poles and Lithuanians (in the 16th century), promising that he will free them. The Czar refuses to accept Vasiliy’s statement that “we do not need to be freed,” and that they are following different paths. Ivan becomes so angry, that Vasiliy faints away as the shouting Russian draws close to him. The latter denies the separate existence of a Ukrainian nation and cradles the President’s head in his hands in an almost Pieta scene and pleadingly asks a series of questions, “Why don’t you come with us?…What other path?…Why don’t you come with us?…Who will be with you?…Who will be with you?…Who?.. and then Vasiliy the PM awakens to find himself at the podium in the TV station. He is about to launch a series of revelations that will shock—and please—the audience and effect what might be a turning point in his government’s long history of corruption.

In the above scene, quite a long one at that, I can imagine, instead of the bearded Czar’s face the clean-shaven visage of Vladimir Putin’s asking the same questions. “Why don’t you come with us?…What other path?…Why don’t you come with us?…Who will be with you?” The 20th century version of Ivan the Terrible has claimed that Ukrainians and Russians are one in order to justify his brutal invasion. And the fictional President’s refusal to accept this, to state that the two nations are on different paths and that the Ukrainians do not need to be freed seems to invigorate the actor who now is actually the President—many times over, we might add.

The other factor I want to emphasize is that the series basic concept of servanthood is in agreement with the teachings of Jesus. And just as his own followers had trouble accepting Jesus’ servanthood concept—Luke reveals that the disciples were still arguing over their power status at the Last Supper—so Vasiliy’s own family fails to grasp that he sees a government as a means of serving and not benefiting from its status. That this is not just a Ukrainian failure we ourselves saw in Washington during the last administration when so many cabinet appointees lavished thousands of dollars on their office furnishings and sought to use their government ties to enrich themselves and their families. The very name of the series, which the real Zelensky also used as the name of the new political party that he founded, suggests a new way of looking at government. In this last episode of Series One, Vasiliy wins a battle over corruption, but as I am sure we shall see when the next series is available, the war itself is far from won.

Given what has been released with English subtitles thus far, I can hardly wait to see the second season. (If you understand Ukrainian or Russian, you need not wait, as all series have been posted on YouTube.) I believe the series tells us a great deal about the character of the real Ukrainian President, as well as shedding light on the cultural milieu surrounding Ukrainian-Russian relations. This is a series that all those praying and hoping for a Ukrainian victory in the current war ought to see. Bravo Ukraine, bravo Netflix, for making this unique series available to a world audience.

When a history teacher suddenly is elected Ukrainian President, he finds fighting corruption harder than expected, even as members of his own family try to cash in.
More Details