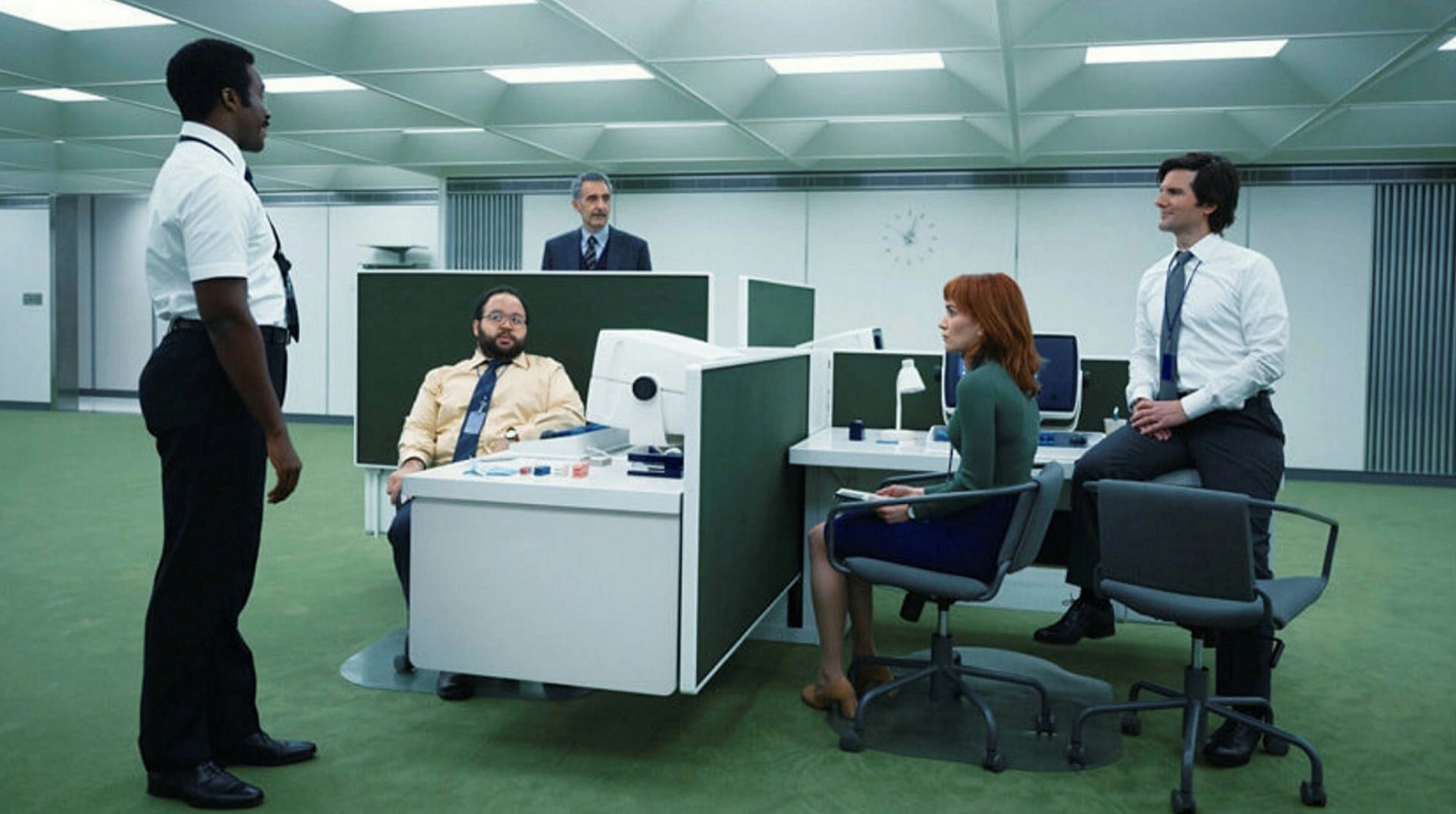 As for you, you whitewash with lies;
all of you are worthless physicians.


They hold fast to their evil purpose;
they talk of laying snares secretly,
thinking, “Who can see us?[a]
Who can search out our crimes?[b]
We have thought out a cunningly conceived plot.”
For the human heart and mind are deep.

For those looking for mind-teasing and challenging viewing, I highly recommend the new 9-episode TV series Severance, now streaming on Apple + TV. Actor Ben Stiller steps behind the camera to direct six of the episodes. Creator Dan Erikson is cowriter, along with numerous other writers. A dystopian science fiction work, it, veers from comedy to tragedy in its depiction of the work place as the arena for a battle for the minds, and probably the souls, of a group of office workers in a biotech company called Lumon Industries.

What company might not appreciate a worker who devotes his total energy and attention to his work, never checking personal email or playing on-line games when bored, never distracted by worries of sick children at home or a wife’s complaints that his mind was on his office work? The fictional Lumon has figured out a solution to these age-old questions: make a company position so lucrative and prestigious that workers will agree to an implant operation that will sever their memory of life outside their work hours. During their “Innie” time they will not remember anything about their families, and during their “Outie” life they will not be able to recall anything about their work. And to keep the two totally separate, install systems in the building and its elevators that will trigger an alarm if Innies tries to sneak out a message to their Outies.

Among the people whose bifurcated lives we follow are:

-Helly (Britt Lower), a young woman who wakes up on a table top and undergoes a series of questions about her life. She is assigned a work place with three other Lumon employees but is so unhappy with her position that she rebels and seeks ways to break out.

– Mark (Adam Scott), Helly’s immediate boss, newly made head of the MacroData Refinement division, and not at all prone to rocking the boat at first, though he is disturbed that his office friend Petey has suddenly been fired.

-Dylan (Zach Cherry) a genial wise-cracker who spins theories about their lives outside the company.

-Irving (John Turturo) , a senior staffer proud that he knew the company’s founding family, believes firmly in following the rules—until…

–  Burt is a senior head of the Optics and Design division who becomes friends (and maybe more) with Irving.

Presiding over Lumon itself is Harmony Cobel (Patricia Arquette), who is busy putting out fires that threaten the firm. She is so devoted to the corporation and its cultish founder that she has taken up residence as Mrs. Selvig, a neighbor of Mark so she can keep close watch on him. In her home she has built a shrine

Neither of these two have undergone severance.

Petey (Yul Vazquez) is Mark’s friend who discovers away to overcome his severance operation and who outside confronts Mark in an attempt to expose to the public Lumon’s sinister practice.

-Devon (Jen Tullock) is Mark’s Outie sister worried that her brother, once a history professor, has made the wrong choice because of his incurable grief over the death of his wife.

Mark’s unnamed brother-in-law (Michael Chernus) is married to Devon and shares her concern. At first seeming to be a fool, he turns out to be the author of a subversive self-help book that Mark discovers hidden in the office and inspires him to join Helly in her resistance.

Part of the film’s mystery is that none of the severed have any idea of what Lumon does or what their dronish jobs contribute to its goal. We are led to wonder why the company has gone to such elaborate and expensive measures to keep not only the public, but its own workers ignorant of what it is doing? I began to think of the Germans during WW 2 who claimed ignorance of the horror perpetrated by family members and friends at the fenced in concentration camps.

The ten episodes keep us in suspense and trying to figure out what is transpiring, and why. The cast is excellent, and the sets perfectly adding to the Kafka-like mystery. The hallways are all white and windowless, a maze so complex that a map is needed for our four central characters to find their way. There are special rooms dreaded because they involve punishments and such. There is a shrine-museum where the founder and his successors are honored with statues and plaques. Our main characters work at cubicles in the center of a large room whose walls have neither a window nor a motivational poster.

Although a lot is resolved by the 10th episode that concludes the first season, no one, characters or us, realizes what Lumon does and thus why all the deception and secrecy. One factor that just occurred to me is the irony that Mark once taught history: what is history but calling up the memories (filtered and thus colored) of people, places and times? Just as I could hardly wait to see the next episode of the first series, so now I can scarcely wait for Season 2 to begin.

4 workers "severed" from memories of outside life grow restive, especially when a colleague contacts one in outside world.
Editor Rating ★★★★★5 out of 5
More Details