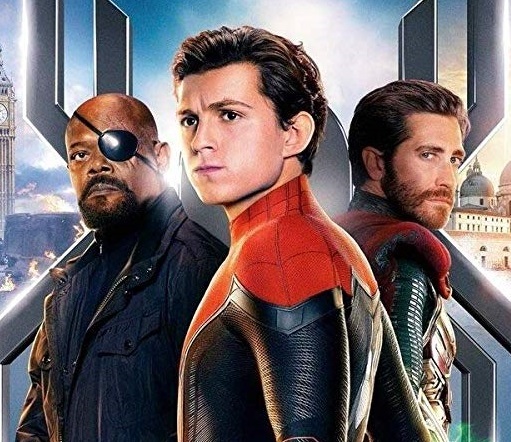 Of all of the galaxy of Marvel Universe superheroes I have always liked Spider Man the best. Probably because in each of them a very human teenager named Peter Parker expresses so well a mixture of wonder that often transforms to exuberant joy and angst that leads him to want to retreat from responsibility. That certainly is the case again in this film that follows on the events of Avengers: Endgame, wherein half of the world’s population and many Avengers were destroyed.

I won’t attempt to explain how they were restored to life in the new film, just state that Peter (Tom Holland) and his friends are back in high school and looking forward to class trip to Europe during the summer. Peter keeps dodging Nick Fury’s (Samuel L. Jackson) attempts to contact him. He just wants to be a normal teenager and have fun with his classmates on their trip, especially with the smart and pretty Michelle “MJ” Jones (Zendaya) and best friend Ned (Jacob Batalon), the latter who along with Aunt May (Marisa Tomei) knows that Peter is Spider Man.

Peter is also mourning the death of his mentor Iron Man/Tony Stark (Robert Downey). His benefactor has left him a pair of hi-tech glasses that give him control of all of Stark’s vast technology and thus his mantle as the world-saving Iron Man, but Peter prefers his role as a local, not global, hero and intends to enjoy life as a teenager. To him Nick Fury and the latter’s  security agent  Harold “Happy” Hogan (Jon Favreau) are unwelcome intrusions into his life when they call upon his services as Spider Man to fight four deadly menaces called the Elementals–earth, wind, water and fire.

Peter thinks he has the answer for escape from responsibility when Quentin Beck (Jake Gyllenhaal) enters his life as the superhero Mysterio, the two of them managing to defeat in Venice a huge watery Elemental that wreaks havoc to the iconic buildings. Describing himself as a fighter for justice from a parallel Earth that has been destroyed, Beck establishes a strong bond with Peter. The younger man sees Mysterio as a fit substitute for himself, so he passes on Tony Stark’s gift and the mantle. It is like the shepherd Moses handing over the staff to his brother Aaron to head up the exodus of the Hebrews from Egyptian slavery. See if the following exchange between Peter and Fury, accompanied by Maria Hill doesn’t sound like a rewrite of Exodus 3:1-4:17:

Nick Fury: We have a job to do, and you’re coming with us.

Peter Parker: There’s gotta be someone else you can use. What about Thor?

Of course, matters do not go the way that Peter expects, nor myself. Not being familiar with Marvel Comics and Mysterio’s past, I was taken in by the earnestness of Jake Gyllenhaal. Indeed, deception becomes an important plot device, leading one to muse about reality and perception. If we believe that something has happened, but it hasn’t, how might that have the same impact as if it had? A question relevant for today with so much fake news appearing so real!

The film’s special effects are as amazing as ever, and the mixture of adventure and teen humor are as amusing. (Good example of the latter is a high school tribute to Tony Stark/Ironman at the beginning of the film and the revelation of Aunt May’s romance near the end.) Peter and MJ, after many attempts by the boy to show his affections, do manage to pair up, suggesting some interesting developments in a future film. The scenery is also beautifully photographed as the teens travel from Venice to Prague to the Netherlands to London. Even if you are not a Marvel Universe geek, director Jon Watts’ film provides almost two hours of escape from the summer heat. Although I prefer the more substantial film are reviewed elsewhere in this issue, it was nice to take a break at the screening of the 23rd of the Marvel films. O yes, in case you have not heard (but I’ll bet you expect them), there are two scenes following the l-o-n-g list of end credits, so don’t walk out right away if you want a hint at what is coming next.

This review is in the July issue of VP along with a set of questions for reflection and/or discussion. If you have found reviews on this site helpful, please consider purchasing a subscription or individual issue in The Store.

Peter Parker is torn between Nick Fury calling him to fight & his desire to take part in a class trip to Europe when Mysterio offers to take his place.
Editor Rating ★★★★★4 out of 5
More Details