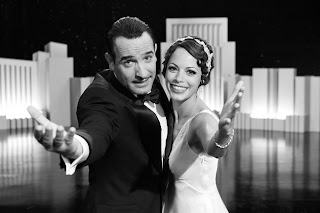 (c) 2011 The Weinstein Company
Again I saw that under the sun the race is not to the swift, nor the battle to the strong, nor bread to the wise, nor riches to the intelligent, nor favor to the skillful; but time and chance happen to them all. 12 For no one can anticipate the time of disaster. Like fish taken in a cruel net, and like birds caught in a snare, so mortals are snared at a time of calamity, when it suddenly falls
Ecclesiastes 9:11-12
Love is patient; love is kind…
1 Corinthians 13:4a

Francis of Assisi is said to have instructed his followers, “Preach the gospel always; use words if you must.” Filmmaker Michel Hazanavicius apparently feels that way about sound,  the characters expressing their emotions and thoughts though facial expressions, gestures, and an occasional interspersed title card. Only at the conclusion do we actually hear a word spoken, and then not by the lovers. This is a daring venture for a modern filmmaker, attempted only by one who is self assured and skillful in his craft.

The simple tale of a silent movie star declining, while the young actress, whom he helped get started, rising with the advent of sound is totally engrossing. The plot is a blend of A Star is Born and Singing in the Rain, set as it is in the late 1920s and early 1930s.

George Valentin (Jean Dujardin) is box officg king of silent movies in Hollywood in 1927. He willingly helps young Peppy get her start in his new film, even suggesting placing a beauty mark just above her lip. He scorns the introduction of sound, declaring that audiences come to see him, not to hear him. How wrong he is, for soon studio chief Al Zimmer (John Goodman) is changing his mind about sound when George’s movie bombs on the same opening night that Pepi’s sound film is a huge success.

Soon George is out of work, starting his long slide into obscure poverty fueled by the despair that drives him to drink. A series of headlines in Variety show Peppy’s ascent to stardom as George sinks even further into despair and the thought of suicide. Peppy is  aware of this, and unknown to him sends her staff to buy up just about everything at the auction at which the debt-ridden George has been forced to sell most of his furnishings, even the huge oil portrait of him that once dominated his living room. She continues to try to help George, one of her films opening at a theater called “Guardian Angel” (or it might have been the name of the film).

The story is simple and moving, and those who have seen either  Star is Born or Singing in the Rain will wonder and worry about George’s fate. The film is so skillfully made that the over-used word “masterpiece” is not Hollywood hype this time. The crisp black and white photography, along with the older, narrower screen size, the the style of the opening credits, as well as the music, take us back to the distant past. Especially effective is the opening sequence when the camera takes us into one of the movie palaces of that era, George’s movie unfolds anccompanied by a large symphony orchestra that matches the music to the pace, action, and mood of the scene. Those unfamiliar with so-called “silent” movies will quickly learn that the old movies were never really silent, that theater staff always had the script and musical score, or musical cues, intended to accompany the picture. Smaller theaters might have had just a small band, or a piano player, but the old movies were never totally silent.

This is a film that older children can enjoy as well as the adults, both enjoying the charming antics of George’s faithful little dog, Uggie. People of faith will love the stars with their expressive faces, and especiallyBérénice Bejo’s  Peppy Miller who becomes such a wonderful agent of grace.