We’re now three fifths of the way through the History Channel’s reworking of the Bible, and what a reworking it is! The scriptwriters seem to inflate the violence of the Bible (and there is no denying that there is a lot in the original text) in every possible way, from the Ninja fight scene in the story of Lot and his visitors at the doomed city of Sodom on to the New Testament, with even the holy moment of the Annunciation taking place amidst Roman violence. Wow!

Last week I wrote: “This makes me wonder what the producers have decided about the huge section of the Bible after Kings David and Solomon, which includes the great prophetic writings. Out of the background of the violence of holy war and the ban arises Jeremiah and the exile of Israel, and the even the grander book of Isaiah with his concept of shalom and the nonviolent Suffering Servant, the latter shaping Jesus’ understanding of his mission.”

I now have the answer, and it is one that I find very disturbing because I believe that the producers have little or no understanding of the theology of the Scriptures, especially of what for Christians unites the writings sacred to the Jews with the story of Jesus and the church. The 3rd week left off with King David and his young son Solomon playing with a model of the temple. The 3rd week jumps ahead almost 300 years to the reign of Zedekiah, “the 21st king,” the script tells us. Thus there is nothing about the ministry of Elijah, a prophet who became an important figure in Jewish folklore, namely that he would be the forerunner of the Messiah (which is why all four gospels begin with the ministry of John the Baptist, who dresses and preaches like Elijah.). Worst of all, there is nothing of the ministry of Isaiah the 8th century B.C.E. prophet of social justice and peace, who urged the king to trust that God would prevent the mighty Assyrian army from conquering Jerusalem.

Isaiah’s promise of an era of Shalom when ”the wolf shall live with the lamb” (see Isaiah 11:1-9) marks the transition from the view of God as a violent war God to that of the God who desires not the destruction of Israel’s enemies, but the God who seeks to use Israel to call the nations so that God “shall judge between the nations, and shall arbitrate for many peoples; they shall beat their swords into plough shares, and their spears into pruning-hooks; nation shall not lift up sword against nation, neither shall they learn war any more. (Isaiah 2:4; also see Isaiah 49:6). More on this later: for now let’s get back to the program. 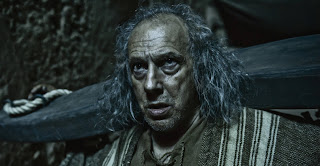 At least we are given a glimpse of the prophet Jeremiah bearing a huge yoke across his shoulders as a sign that the nation would soon become captive to mighty Nebuchadnezzar of Babylon. The prophet tells King Zedekiah to surrender to the army outside the city walls, but the king does not listen to him. Thus we are treated to lots of battle scenes during which the Babylonians batter down the city gates and rush in to slaughter the inhabitants. Amidst all the blood there are two scenes that are moving: when Jeremiah looks up and sees the temple in flames; and the capture of the fleeing royal family, after which the Babylonians kill the two young royal princes while their anguished father is looking on, and then, the Babylonian uses his thumbs (as earlier in the case of Sampson) to punch out Zedekiah’s eyes.

Three stories from the Book of Daniel are used to show life for the Jews in Babylonian captivity under King Nebuchadnezzar—Daniel interpreting the King’s dream and thus gaining royal favor; the story of the three men cast into the fiery furnace because they would not bow to the king’s golden statue; and Daniel thrown into the lion’s den.

The film’s handling of history seems very muddled at this point, the latter story supposedly taking place after the Persian King Cyrus conquers Babylon without a battle. In the Book of Daniel itself it is King Darius, a successor to Cyrus, who reluctantly orders Daniel to become supper for the lions. To muddy things further, in the Book of Ezra we are told that shortly after Cyrus conquers Babylon, he issues his decree allowing the Jews to return home. (The filmmakers take a Fundamentalist approach to the Book of Daniel in the belief that it is a historical book dealing with events of the 6th century B.C.E., whereas many scholars believe it was written several centuries later to bolster Jewish resistance against the Seleucid Empire. For a scholarly article see the Wikipedia’s “The Book of Daniel” at: http://en.wikipedia.org/wiki/Book_of_Daniel.)

The series moves on to the New Testament with the last words of the first hour, “This isn’t the end…it’s the beginning.” Maybe so, but the emphasis upon violence continues. The Jews are now under Roman rule, and as we see in the depiction of a crucifixion, it is a harsh rule. The depiction of the Annunciation, in which an angel appears to Mary, telling her that she will give birth to the Messiah, has to be the strangest ever filmed. She is out in a street of Nazareth when Roman soldiers appear, brutally pushing and shoving people around. She moves through a door, and the angel appears to her announcing the GoodN\ews/Bad News. (The good thing about this, and all of the other angel depictions, is that they are not the glowing, feminine winged creatures of Victorian art, but look like mortals wearing hoods.) 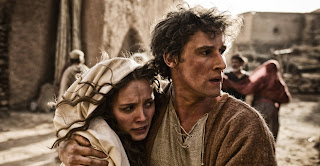 Joseph saves Mary from the anger of their neighbors.

Joseph, much younger than tradition makes him out to be, is understandably upset when he discovers that Mary is pregnant, but he comes to her defense when the villagers are about to attack what they consider to be a fallen woman. The events of the journey to Nazareth quickly follow, with the couple arriving at the Bethlehem inn amidst a rainstorm. A rainstorm! This is a peculiar touch, because the shepherds are close by where they can see the Star (imported from the Gospel of Matthew’s Magi story, Luke mentioning angel messengers, but no bright Star). Everything is telescoped into a single night, with cutaways to one of the kings visiting King Herod to discover where the prophesized new king will be born, the king ordering out his soldiers, the arrival of the shepherds at the manger, and then the Magi with their gifts (no Drummer Boy, thank goodness), Joseph’s dream about Herod’s soldiers, the flight to Egypt, and the slaughter of the innocents (more opportunity to show some bloody action). 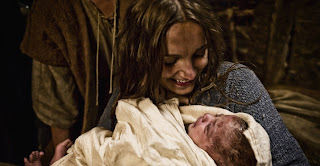 The Birth of the Christ Child.

Jump to “25 years later” and we have John the Baptist, Jesus’ baptism, and his temptations in the wilderness. I am always interested in the creative ways this is depicted—my favorite being a long scene in the CBS miniseries Jesus in which Satan takes a female and a male form and even demands that Jesus “empty himself of his divinity—and the makers of this film add their own touch of creativity. Actor Diogo Morgado truly looks wracked with thirst and hunger when Satan tosses him a large round stone and tempts him to turn it into bread. And in the 3rd temptation (the script follows Matthew’s order) in which Satan offers Jesus sovereignty over all the kingdoms of the world we see Jesus upon a throne with a Roman (I think it is Pilate, whom we see in several scenes with Herod Antipas) offering him a crown. The golden crown quickly changes into thorns, and there is a flash of a hammer driving nails into his hands. This is an inspired way of revealing that Jesus has chosen a far different way than Satan’s for living out his calling to become the savior of the Jews (and of the world. I hope there will be more such creativity in the remainder of the series.

This depiction of Jesus envisioning his crucifixion makes the exclusion of Isaiah the prophet from the Old Testament portion of the series all the more heinous because it is obviously the Book of Isaiah that formed the model for the kind of Messiah Jesus chose to follow. In the last portion of Isaiah, written much later during the Babylonian Exile than the words of the prophet of the first 39 chapters who resided in Jerusalem, there are a series four “Servant Poems” in which God promises to raise up a Servant who will become a “light to the nations,” “nations meaning Gentiles.

In the last of these poems (Isaiah 52 & 53) this Servant is seen as voluntarily taking upon himself the penalty of guilt and suffering of everyone else, so that, we read in Ch. 53:5 “But he was wounded for our transgressions, crushed for our iniquities; upon him was the punishment that made us whole, and by his bruises we are healed.” To leave out this prophet is inexcusable. Granted, even at 5 hours, the time available for covering the Hebrew Scriptures was limited, but to choose the violent story of Sampson over the story of Isaiah and that of the prophet of the Exile shows that the producers just “don’t get it” when it comes to what the Bible is really about! They chose a violent action story over the theologically important story of the Book of Isaiah. Leaving out Isaiah is comparable to writing a history of the founding of the United States without mentioning the Declaration of Independence.