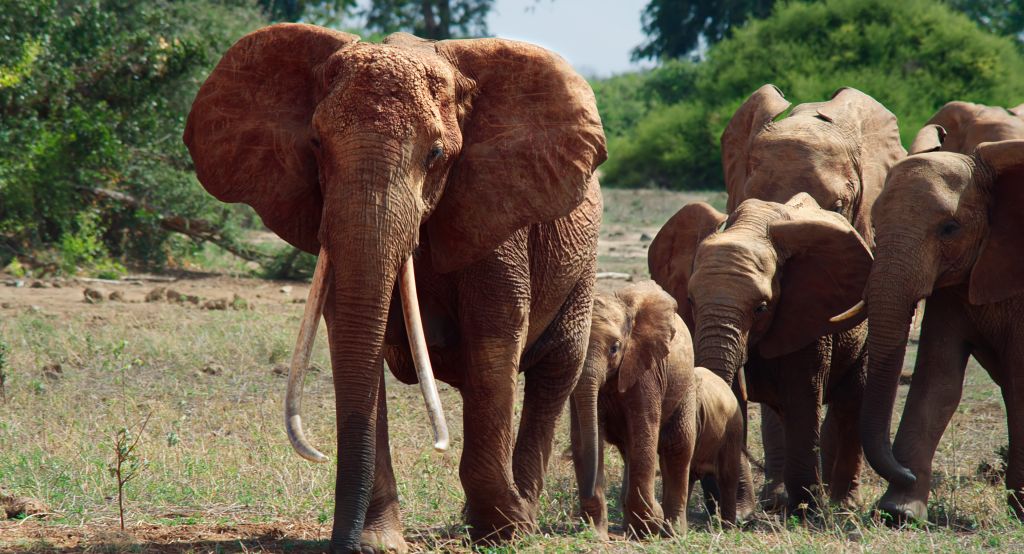 Documentary filmmakers Mark Deeble and Victoria Stone treat us to some of the most beautiful and intimate shots of African elephants ever made. Shot over a 4-year period in Kenya’s Tsavo East National Park, the film focuses upon an extended family headed by the long-tusked Athena as she guides them in their quest for food and water.  During the 4 years the savannah was hit with its worst drought in years, turning the story into one of a struggle for survival. The camera often cuts away to follow the antics of other creatures who thrive in or by the waterhole– including bullfrogs, chameleons, dung-beetles, killifish, terrapins, and a goose family. The narrative is voiced by the actor who also voiced Scar in the recent remake of The Lion King, Chiwetel Ejiofor.

Mark Deeble’s script steers a midway course between the cutesy anthropomorphism of a Disney Nature film and a scientific recording of wildlife. Not only are the various creatures given names, but thoughts and motivations are imputed to them, especially the 50-year-old Athena. Much attention also is given to a young elephant called Wewe, who befriends the new-born infant Mimi.  The song “The Circle of Life” is not used, but the concept certainly forms the structure of the story, beginning with the birth during a lightning storm of Mimi at the watering hole called “The Kingdom,” and closing a year later when the herd returns from their temporary refuge to the “The Kingdom,” with a new birth.

In between we come to admire the wisdom of Athena as she decides both when, during the dry season, to leave the watering hole after its water is drunk up by a flock of a million migrating birds, and then later, discerning that the spring-fed watering spot to which they have trekked, can no longer sustain the huge number of animals drinking from it, when to return home. If they leave too soon, before the coming of the annual rains, they will die of thirst and hunger. If they wait too long, they will become too weakened because all of the nearby food has been consumed. It is a long, difficult journey between the two watering spots, and not every elephant will be strong enough to finish it, as we see in a poignant episode.

The stories of other animals, involving lots of close-ups of the birds, amphibians and insects, are instructive of how crucial the elephants are to the ecosystem. The huge animals work to enlarge and deepen the watering hole, and their dung provides sustenance to a dung beetle that we see pushing a ball of dung several times its size, and along the way having to fend off two other beetles trying to steal it. The insects, frogs, and lizards all flit to and fro as the elephants walk along the shallows, somehow avoiding being stepped on. Nearby a pair of geese hatch several chicks, with one of them, always late or getting lost, being named Stephen. (I suspect his story is a construct pieced together from clips shot over the lengthy filming period.) The elephants cover their hides with mud for protection against the scorching summer sun: embedded in that mud are the eggs of killifish. Thus, as the pachyderms migrate, the eggs are distributed at other water holes along the way.

Several times we see giraffes and zebras, but to my surprise, no predators. The filmmakers concentrate on the elements of Nature—rain and lack thereof, drought and dust storms—as being the enemies that Athena and the herd have to contend with, though at the end of the film poachers are mentioned. Humans reportedly kill 30,000 elephants a year for their ivory tusks—and among them is the huge male tusker Satao shown in an earlier sequence encountering Athena in an affectionate way. The only predatory scene is of large frogs attacking and swallowing small newbies that are just emerging from the waterhole, which will be gross enough for children. Mostly this is a film for the whole family.

When Jeremiah describes the terrible drought of his time, he ascribes the blame to his nation’s sins that have upset God. For Athena and her family, forced to migrate back and forth because of the lack of rain, the blame is not that of the animals, but of humans failing to do enough about climate change. Between the toll taken by the drought and that of poachers, these gentle giants are threatened with extinction. Future generations will be grateful that the filmmakers have left such a respectful tribute to these beasts—beasts, and yet sharing with us a concern for the other and the capability of mourning one who is lost.

I have always heard that an elephant uses the tip of its trunk to explore and communicate with others but have never seen before so many instances of this. Little Wewe chases after tiny Mimi, his trunk moving over her little body. Mother elephants reach out to their babies, their trunks caressing them, entwining round their tails. Athena and the even larger Satao bring their mighty heads together, communicating with their snake-like appendages. And in  that incredible scene of mourning, the herd gathers around the skull, each of them stroking it for several minutes before moving on. Serving as his own cameraman, co-director Mark Deeble becomes our eyes for a memorable close-up of these majestic creatures. Prolific composer Alex Heffes enhances the emotional reaction to the already dramatic photography, making this a film you will long remember.

This film is well worth the price of a month’s membership in Apple TV+.

For the interesting details on making the film see Brian Jackman’s article in Travel Africa Magazine.

The story of how a matriarchal family of elephants & other creatures around their watering hole survive a drought in Kenya.
Editor Rating ★★★★★5 out of 5
More Details