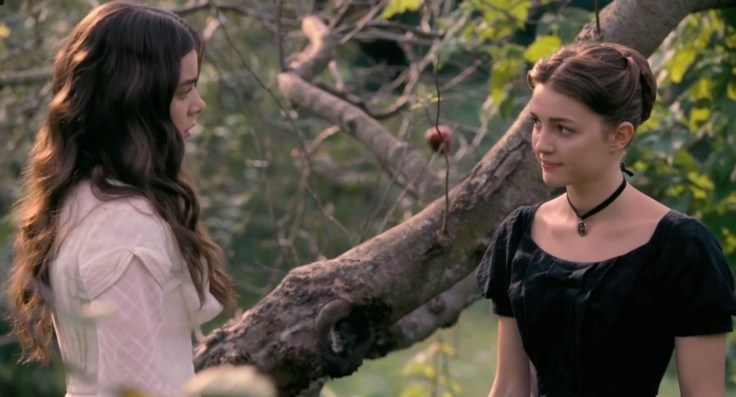 A  capable wife who can find?
She is far more precious than jewels.


But the Lord answered her, “Martha, Martha, you are worried and distracted by many things; there is need of only one thing.  Mary has chosen the better part, which will not be taken away from her.”

Those of us who enjoyed A Quiet Passion might well have mixed feelings about Alena Smith’s Apple TV+’s series Dickinson. The approach is very different from that of British filmmaker/writer Terence Davies in his 2016 biopic. Other than its title and subject, I knew nothing about the 10-part series (or that a second series has been approved) upon coming across it while browsing Apple+’s website. Thus, some aspects of it came as a slight shock.

The film depicted poet Emily Dickinson as a rebel in its first scene in 1848 at Mount Holyoke Female Seminary where student Emily refuses the command of its director, the famous educator Mary Lyon, to declare that she is among the “saved.” She is gladly relieved when her brother Austin comes to escort her home, away from its confines. In the series the rebelliousness of Emily (Hailee Steinfeld)) is accentuated by depicting her as a 21st teenage “rebel with a cause,” the latter being the pursuit of a woman’s right to control her own life. Although the costumes and sumptuous New England sets are picture perfect, the dialogue is full of such anachronisms as “Hang in there,” and “Let’s hang out.” And there is the disastrous 3rd episode—but more on that later. Also, the soundtrack music is very much of this century and not that of the 19th.

Along with the wonderful costumes and period-accurate sets, the use of the first line of  one of Dickinson’s poems as the title of an episode is a delight. This does not mean that the episode is about the writing of the poem. Actually, all the poems were written ten years or more later. Instead, the poem is an apt description of the theme or what transpires in the episode.

This is a flawed, but bold series well worth watching. I am looking forward to seeing the final five episodes. At the very least it has sent me in search of the ten poems used to name the episodes. This is all to the good if it encourages others to do so as well. One of the tragedies of our literary history is that such a fine poet never received her due recognition in her own lifetime. And the series does well in raising the issue of the rights of a woman to follow her own destiny. Her father and mother’s opposition is so similar to what Louisa May Alcott faced, which is highlighted so well in Greta Gerwig’s recent adaptation of Little Women. I understand that in a later episode Emily will meet the famous author. Although there is no historical evidence that the two did meet (nor that she ever met Thoreau), I think it is appropriate to speculate about them because the young poet so eager to break into print, must have regarded Alcott as a role model. There is also the other well-known female author of the times, Harriett Beecher Stowe.

The conflict between Emily and her mother and father is well handled. Mrs. Dickinson, also named Emily, is a sad case of a captive being so indoctrinated with the belief’s of her oppressor (as some Southern slaves were) that she spouts proudly his doctrine, that she aspires to be “the best housewife in New England.” Emily’s rejection of this feminine dream, and hence her resistance to doing her chores, might well remind you of Sor Juana in the Argentinian film I, the Worst of All, who as a teenage scholar decided to enter a nunnery where she would have more freedom to study than she would as the wife of a domineering male. I suspect we will see more of Emily’s refusal to fit in, though it cannot be any stronger than her rejection of her friend George as a suitor in the 5th episode.

Emily’s father Edward is presented as a conflicted man. He loves his daughter but is so imbued with his culture’s male chauvinism that he opposes Emily’s attempts to act outside society’s view of what is fit and proper for “a lady.” He is irate over her publication of a poem in the college literary journal and yet supportive enough of his daughter’s repugnance toward domestic chores that he hires a maid, much to the consternation of his wife. Emily hates kitchen chores, yet she learns to bake bread, so she presents her father with a loaf. He does not share Emily’s love of Nature, but he gives in to her desire to save her beloved oak tree. Thus, the dramas present its characters as fully human, which means holding conflicting beliefs, with one, and then another emerging in our actions.

Edward’s male chauvinism was very much nurtured by the New England form of the Christian faith that Emily rejects. As can be seen by the three Scripture passages above, the Bible holds conflicting views of the role of women. It is a long way from the paternalistic view of the perfect wife in Proverbs to that of the acceptance, indeed, the approval, by Jesus of Mary’s desire for learning, even while failing to help her sister in the kitchen. Martha, like Mrs. Dickinson, resents her sister’s rejection of her view that a woman’s proper place is in the kitchen. And though Solomon, or whoever wrote Ecclesiastes, readily accepted male superiority over “the weaker sex,” his observation about unchecked oppression certainly applies to the situation that women have endured through the ages, and in too many places, still do today.

Before closing I should also point out that Alena Smith sides with those who believe that an important part of Emily Dickinson’s refusal to marry was due to her lesbianism. Some Christian groups will have difficulty with this, but those who have an inclusive view of the LBGTQ community will welcome the scenes disclosing this. The nature of her love for Sue and other female friends may have been suspected by some of her peers, but not brought out in the open. However, many scholars have surmised this from the passionate nature of some of her poems, even if not openly acknowledged and recognized.  The more that such stories as Emily’s are depicted in media, the more accepting will our society become of sexual differences in our society.

This review will be in the June issue of VP along with a set of questions for reflection and/or discussion. If you have found reviews on this site helpful, please consider purchasing a subscription or individual issue in The Store

Emily Dickinson emerges as a young woman & poet who loves best friend Sue & struggles against her mother who wants her to marry & her father who is against her poems being published.
Editor Rating ★★★★★4.5 out of 5
More Details