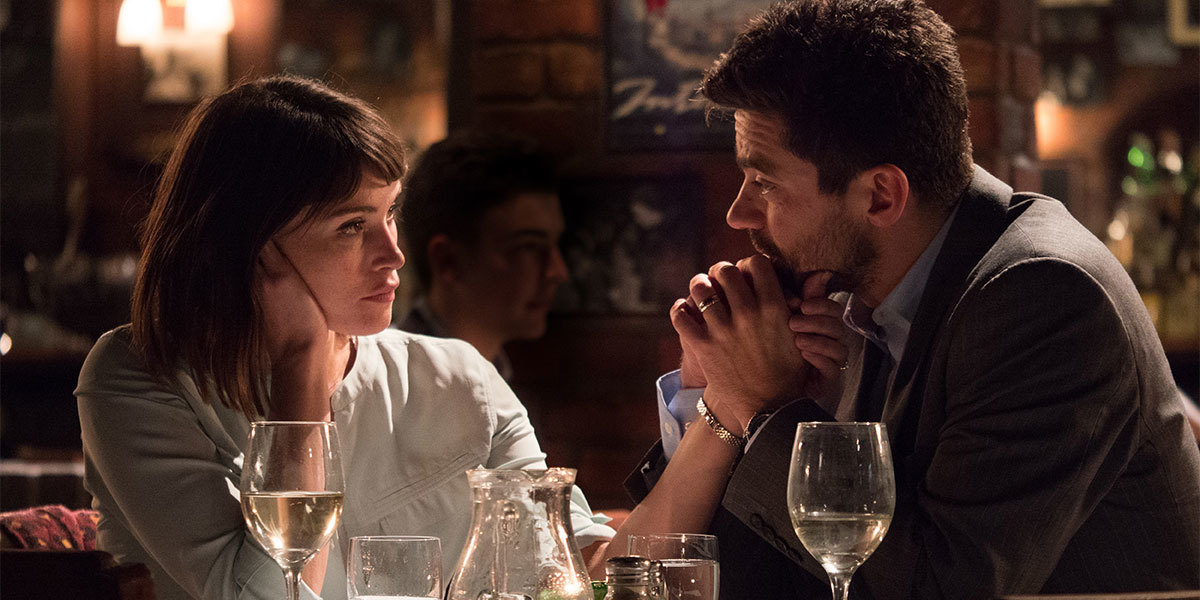 And I say, “O that I had wings like a dove! I would flyaway and be at rest…

Few films depict the despair of a woman starved for more than a life of endlessly fixing supper for a tired husband and dealing with crying children who drain her of most of her energy. A shot of their suburban backyard mirrors her inner life and feelings—unpicked-up plastic toys littering every inch of the lawn. A mess! The house is located in a London suburb, but it could as well be in Middle America.

Writer-director Dominic Savage does not even reveal the name of the housewife (Gemma Arterton) until well into the film. She is referred to by her husband Mark (Dominic Cooper) as “babe” and by their two children as “mummy” and, when angry as “stupid mummy.” Her life consists of caring for two little children all day and lastly enduring Mark’s sexual advances in bed that satisfy only his needs. One night she whispers, “I’m unhappy. Marks is perplexed, uncertain what to say or do. “Are you laughing or crying? I can’t work it out,” he asks as she cries into her pillow. They participate in a cookout with their neighbors, but she does not seem really to be present. Her mother is no more understanding of her than Mark.

The one thing that lifts her from her ennui is a beautiful art book that she comes across in a London book stall. It is The Lady and the Unicorn, an art book filled with colorful photos of a set of medieval French tapestries that I have admired also. Fascinated by the lovely lady and the unicorn, she is unable to arouse any interest in them when she shows Mark the book. Nor is he very responsive to her suggestion that she might want to take an art course in London.

After showing her growing desperation in the first hour of the film, Tara throws some clothes into an overnight bag, boards a train, and arrives in Paris. In this sequence the colors are brighter and her spirit, as she walks the streets of “the city of light,” is lighter. She catches the eye of a Frenchman with a small beard and camera, who follows her into the National Museum of the Middle Ages where she comes face to face the lovely tapestries she has admired in her book.

I was with Tara up to this point, thereafter the film falls into the all too common acceptance that a one-night fling brings release and freedom. Like too many feature films, this one suggests that adultery might be what is needed in a failing marriage, especially when it is committed in a foreign land with a stranger, thus minimalizing any possible consequences. I realize that the ambiguous (and abrupt) ending indicates that the film maker is being non-judgmental, but as a person of faith I find I must be, though not in the sense of condemning Tara. She is desperate to escape a soulless situation, and strong enough to act, even though I do not approve of her betrayal of her wedding vows. Also, I am concerned about her relationship to her two children as well as to her husband. The film does not provide us with a rounded view of the daughter and son, the film maker choosing instead to show them as burdens or obstacles to Tara’s own happiness. Had we been allowed to know them better, this would have made Tara’s predicament more complicated and poignant.

Like other viewers, I wonder what she—and Mark—will do when she returns home. I want to grasp at the thin thread of hope left at the ending, though whether it leads to the pair, with some new-found maturity, working to improve their relationship (it would be interesting to see a film focusing upon the left-behind Mark wrestling with his blindness to the deterioration of their relationship), or to their separation, I do not know.

Filled with despair concerning her marriage, a mother t ravels from London to Paris, has a one night affair & returns to her husband & children.
Editor Rating ★★★★★4 out of 5
More Details