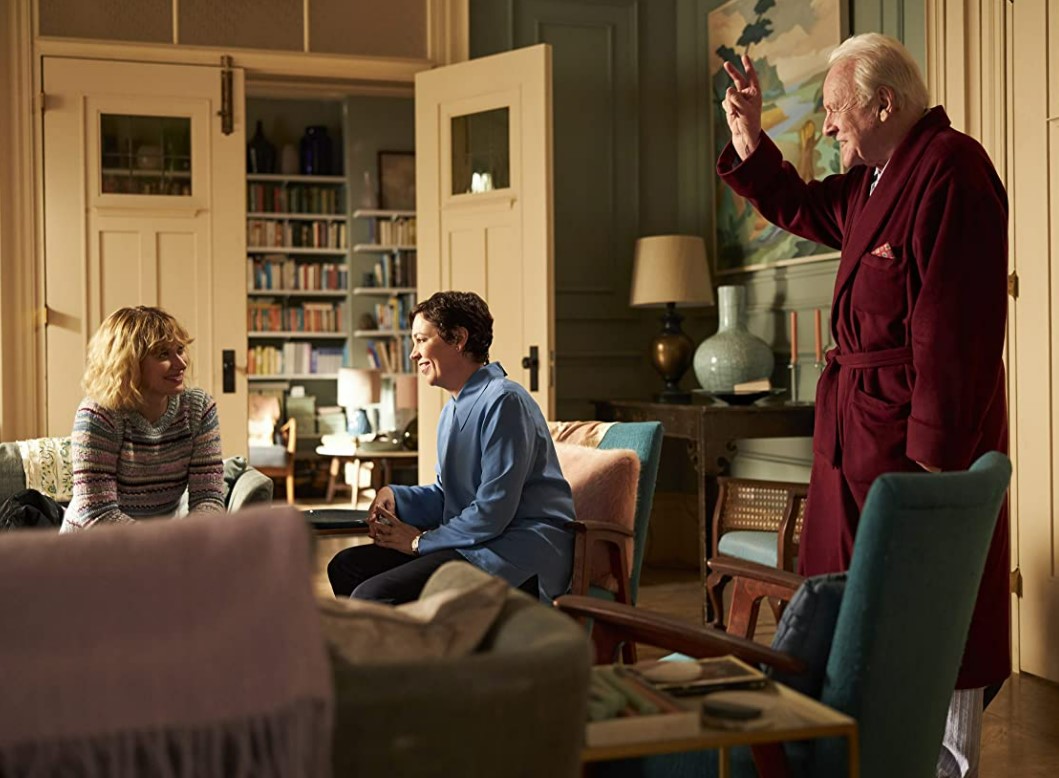 Do not cast me off in the time of old age;
do not forsake me when my strength is spent.


Children, obey your parents in the Lord for this is right. “Honor your father and mother”—this is the first commandment with a promise: “so that it may be well with you and you may live long on the earth.”

French director Florian Zeller, adapting his own acclaimed play in collaboration with Christopher Hampton, has given us an intriguing film that at times gives us the experience of dementia, and not merely a story about it. The sterling cast, headed by Anthony Hopkins and Olivia Colman as the aged Anthony and his loyal daughter Anne, perform so impeccably that the memory of the film will be seared into your brain—unless, of course, you should fall prey to dementia.

The film begins with the father and daughter discoursing in his large, rather sumptuous London apartment where the octogenarian wiles the time away by listening to lush arias from operas. Anthony cannot find his watch and accuses the caretaker who has just quit with stealing it. Anne has been down this road with him before. She is sure that the caregiver had not done any such thing, and she complains how difficult it is finding another one. She informs her father that she is not going to be able to look in on him each day because she is going to join her lover in Paris. She will have to place him in a nursing home if he continues to drive off his live-in aides. Angrily he declares, “I don’t need anyone!” How wrong can a man be?!

In one sequence Anthony is surprised when he enters the living room to find a man he does not recognize. The supposed intruder is Anne’s husband, played by Mark Gatiss, simply called “The Man” in the credits. The man replies to Anthony’s challenge by telling him it is his and Anne’s apartment, not his, that the father has been living with them for some time.

At other times Rufus Sewell says he is Anne’s husband, Paul. He has about had his fill of Anthony, so he says to Anthony the same words that the old man had flung at “The Man” earlier, “How long do you plan to hang around here?” Other such sentences are also repeated at various times.

In other scenes Anne is single, having divorced a husband five years ago. She says she has no plans for moving to Paris—even tells that to the doctor during her father’s examination.

Anthony can be charming one moment and then quickly turn into a verbal assassin. When Anne brings in Laura (Imogen Poots), for an interview, the old man claims to have been a tap dancer—he was an engineer interjects Anne, contradicting him—and he even executes a few steps. Laurie laughs in delight, whereupon Anthony suddenly cuts her by saying he hates that kind of laughter. He is often cruel to Anne as well, especially with his remarks about Anne’s sister Lucy, whose paintings adorn some of his walls. Obviously the favored one, she has not written for some time, he says. One stark, short scene, reveals her status.

All this leads to the viewers’ confusion at first, until we realize that we are seeing things through Anthony’s point of view. These contradicting scenes bring on our confusion, our understanding of “reality.” We are seeing the world through his eyes.

Only at the end can we be sure that what we are seeing is not the product of his demented mind. What we see is an extended, tender scene of compassion as a patient nurse named Catherine talks with Anthony in his nursing home room. As he deteriorates, he lays his head against her side as she comforts him. he even calls out “I want my mummy.”

This is as stark a picture of dementia as is found in Amour, but packing a greater punch because we are led to share in Anthony’s confusion. And yet it is not totally bleak, thanks to that last scene. No one in the film seems to possess any faith, the family being as secular as society. Anthony would not pray with the Psalmist, ” In you, O Lord, I take refuge,” but nurse Catherine is the answer to the plea of Verse of 9 as she holds in her arms the confused, bewildered old man. For those familiar with religious art the shot is like a Pieta, filled with perplexed grief yet enwrapped by arms of compassion. The camera moves from the pair bonded so closely together to give us a view of the world through the window of that room of confusion and compassion. I think it is connected to the following exchange between the two of them a few moments earlier:

Anthony: I feel as if I’m losing all my leaves.

Catherine: What do you mean?

The dominant color of the last shot is green, symbol of life. Outside the trees still retain their branches and leaves.

Anne tries to cope with her rebellious father Anthony who is slipping into dementia. Finding a care person proves difficult.
Editor Rating ★★★★★4.5 out of 5
More Details