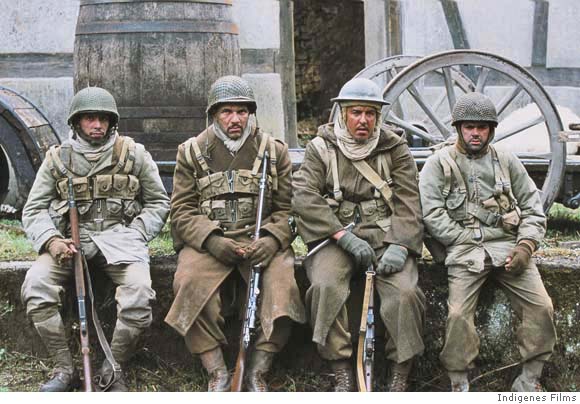 For there is no distinction between Jew and Greek; the same Lord is Lord of all and is generous to all who call on him.

Co-writer/director Rachid Bouchareb provides a very different perspective on World War 2 in this tale centering on four North African Muslims who enlist to free what they regard as their fatherland, France. The original French title is Indigènes, referring to the hundreds of thousands of “indigenous” colonial African soldiers who fought and died for France in World War II. I suspect that those who gave it its English title were thinking of Edward Zwick’s Glory, because just as that film was about American Black soldiers fighting for a racist country, so this one too is about soldiers fighting and dying for a country that did not love them back.

Ranging from Algeria to the mountains of Italy and then southern France, the film follows the ups and downs of four Muslim soldiers who initially believe that fighting for France, their country though they have never seen it before, will lead to better lives. One of them named Said declares, “I free a country and it’s my country. Even if  I’ve never seen it before. It’s my country.” However, as they experience battle after battle, they slowly suffer disillusionment when their French superiors continue to treat them as third-class citizens. They sometimes are issued inferior equipment. They protest when they are denied the tomatoes given to white soldiers. They are passed over for promotions. Others, after an exhausting battle, are granted leaves for visits with loved ones, but not them.

The battle scenes are gritty, with the indigènes often used as machine gun fodder. In one scene in which they are ordered up a hill in the face of murderous German machine gun fire, our perspective is from that of the French officers who safely view the carnage through their binoculars. The charging soldiers look like ants, tiny black specks, the details of their agonized dying hidden by the distance.

The film, the Algerian nominee for the best foreign-language film Oscar in 2006, might also remind viewers of another harrowing war film, Saving Sergeant Ryan, because of a visit to a military cemetery where the survivor views the graves of his comrades. By this time viewers may well have a lump in their throat because they have been wondering about the outcome of a romance between one of the North Africans and a French women. The two had vowed to stay in touch when he is sent forth into battle again, but his letters are tossed aside by the censors, and she is unable to obtain his whereabouts from the local military, who could care less about a North African.

At the end title cards inform us that when Algerian won its independence, the French government froze pensions for all indigenes veterans and benefits for the wounded, at 1959 levels. President Jacques Chirac saw Days of Glory and he and the public were so moved that the pensions were fully restored. The Algerian candidate for the best foreign film Oscar, this is a movie that really mattered, and, readily available on DVD and Amazon prime, it should to you as well.

4 Algerians in WW 2 discover how prejudiced the French army is as they fight Germans from Italy to southern France.
Editor Rating ★★★★★4.5 out of 5
More Details