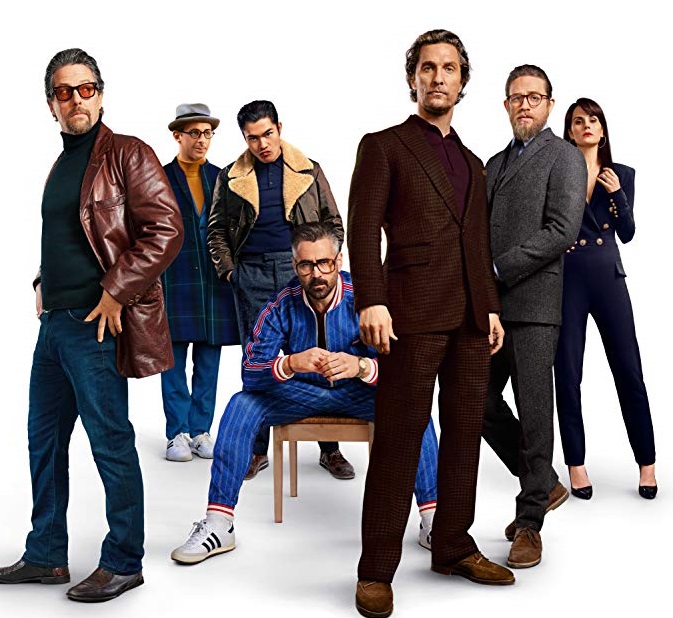 The title must be taken with a pound of salt in Guy Ritchie’s new action comedy, stuffed with killers and drug dealers and a blackmailer. It also requires us to root for a bad guy who has earned his millions through his network of marijuana farms—though we are supposed to see a redeeming factor when he tells an Asian drug dealer that he refuses to deal in the soul and body destroying heroin.

Framed by the screenplay that shady private investigator Fletcher (Hugh Grant) is describing to Ray (Charlie Hunnam) about the latter’s boss drug dealer Mickey Pearson (Matthew McConaughey), the film bounces around a lot, a plot left hanging as a related story unfolds. Fletcher’s screenplay, of course, is for blackmail. A tabloid would pay plenty for its juicy revelation about Mickey. Fletcher is smug and confident that he has the goods on Mickey, who will pay him an enormous sum to obtain it.

The core story is that the American drug producer wants to retire and spend more time with his wife Rosalind (Michelle Dockery). Possible buyers of his marijuana farms include Jewish-American billionaire Matthew Berger (Jeremy Strong) and Chinese gangster “Dry Eye” (Henry Golding). Many complications arise, with bloody encounters and even some deadly Russian mobsters intervening before the bullets and the bodies cease flying and falling. I lost count, so I am not sure whether there are more dead bodies or “f” expletives in this hard-R rated film. There certainly are surprises—when one scene ends what you think is a certain way, you discover later on that something else resulted.

The vulgar talk and bloody deaths place this in Tarentino territory, a far cry from Michelle Dockery’s Downton Abby. Can you imagine Lady Mary Crawley saying in a cockney accent, “There’s f–kery afoot”? Despite her beauty and somewhat strong character, the film is largely a macho man’s work that reinforces Western prejudices. The white Mickey has the high moral ground of dealing only in marijuana, which supposedly harms no one, whereas the Asians, dealing in heroin, are “killers of worlds.”

Hugh Grant and Michelle Dockery are the main reasons for seeing this messy affair, but only if you can’t get into the better films at your cineplex. I won’t even take the time to formulate discussion questions or to look up a related Scripture passage. If you want the latter, just do a word search of “evil” or “wicked.”