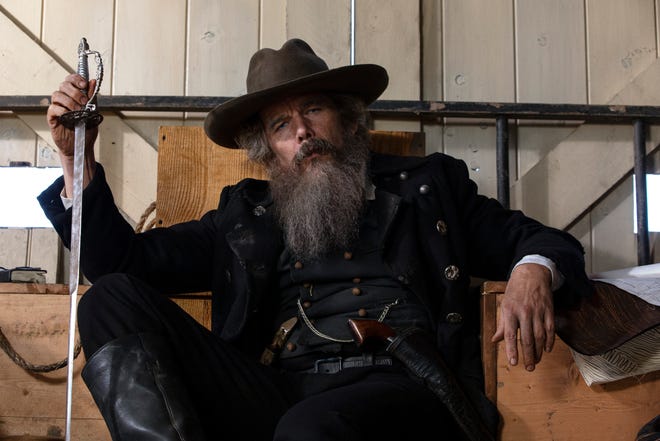 Then another angel came out from the altar, the angel who has authority over fire, and he called with a loud voice to him who had the sharp sickle, “Use your sharp sickle and gather the clusters of the vine of the earth, for its grapes are ripe.” So, the angel swung his sickle over the earth and gathered the vintage of the earth, and he threw it into the great wine press of the wrath of God.  And the wine press was trodden outside the city, and blood flowed from the wine press, as high as a horse’s bridle, for a distance of about two hundred miles.

Ethan Hawke has the role of his life as fiery Abolitionist John Brown in this tongue in cheek mini-series that he created and helped produce and write.  We know at the outset that this isn’t pure history when, before the title we read, “All of this is true… Most of it happened.” Indeed, the story is narrated by a fictional character, the 12-year-old slave Henry Shackleford (Joshua Caleb Johnson), whom Brown sets free during a fiery encounter with Kansas “Red Shirts.” The “true” part comes from James McBride’s National Book Award-winning novel of the same name, on which the series based. The series’ title refers to the ivory-billed woodpecker, the feathers of which Brown and his sons believe bring good luck. (How wrong can you be?! Look what happens to one of the sons early in the series!)

The story, dwelling on the last three years of John Brown’s life, begins with Brown getting his haircut in a saloon. Henry’s enslaved father, the barber and preacher, and the customer are exchanging Scripture passages when Red Shirter Dutch Henry Sherman (David Morse) enters. Under his questioning the customer reveals that he is the notorious killer Abolitionist John Brown. During their exchange of gunfire, the barber is killed, and Henry taken away by the escaping Brown. At his hideout with his sons and gang members Brown thinks he hears Henry respond that his name is Henrietta, so he dresses him in girl’s clothing. He even gives him his good luck charm, a dried-up onion, which the hungry Henry thinks is meant for food. The boy eats it, and after recovering from the surprise, Brown dubs him “Little Onion.”

Brown declares that Little Onion is freed, but Henry himself feels just as enslaved as ever, now to a murderous White man who forces him to ride with the gang and to witness unspeakable acts of barbaric violence against slavers. One such incident is especially heart-rending: Brown’s gang invades a Red Shirt man’s cabin, drags the man away from his crying wife and children, and, despite pleas for mercy, cuts off his head.

Thus, this is not a series for the squeamish. Though there is considerable humor and irony, this portrait of Brown as a crazed Bible-quoting (who often garbles his quotes) butcherer illuminates the dark story of the background of the Civil War. Henry is only interested in getting away and finding whatever personal happiness possible to a colored man, but Brown forces him to participate, or, given the belief that his charge is a girl, at least to be a witness to his violent crusade. All members of the supporting cast are excellent, but Hawke dominates every scene, convincing us that though Brown’s belief that Blacks should be freed, his madness prevented him from seeing that the methods of his “gunfighters of the Gospel” were horrible. And yet also, though a crazed fanatic, he perceived as many Abolitionists did not, that no compromise was possible between the advocates of slavery and those of freedom and that slave owners would never yield to moral persuasion.

I have as of this writing seen just the first five episodes but have read the book. The filmmakers maintain the author’s irreverent approach—to Brown (his long-winded prayers are a constant joke throughout the five episodes), and especially to the iconic Frederick Douglas. For more on the latter see my synopses of Episodes 3 & 5 in the November VP.

Brown’s belief that slaves would rise up in revolt at news of his invasion of Virginia proved ill-founded, costing him and his accomplices their lives. But a scant two or so years after his execution, Union soldiers marching into battle sang, “John Brown’s body lies a moldering in the grave.” ! And they were right when they sang the chorus–in this riveting performance by Ethan Hawke, “His soul is marching on”! The carnage of the bloodiest war in American history can be considered as Brown’s legacy, but it did end the institution of slavery. But not the racism, the belief in white superiority that survived—not just in the hearts of the former slave owners, but in those of a vast number of Northerners as well. We could see Brown’s legacy as the complete failure of the theory of redemptive violence, that though violence can put an end to an evil institution, only a revolution in the human heart can end its cause. It is that revolution, one occurring deep within, that is still going on, and will continue as long as there is any trace of injustice in our society.

This review will be in the November issue of VP along with synopses of the first 5 episodes and for each, a set of questions for reflection and/or discussion,

If you have found reviews on this site helpful, please consider purchasing a subscription or individual issue in the Store. You will discover that your $39 pays for not just 12 issues of a journal that includes the discussion questions for the films, but a large archive of over 2200 films and even more reviews and special articles in all the issue of past issues of Visual Journals dating to 2012.

The story of John Brown & th road that led to his anti-slavery revolt at Harpers Ferry is irreverently told through the eyes of fictitious boy slave posing as a girl.
More Details