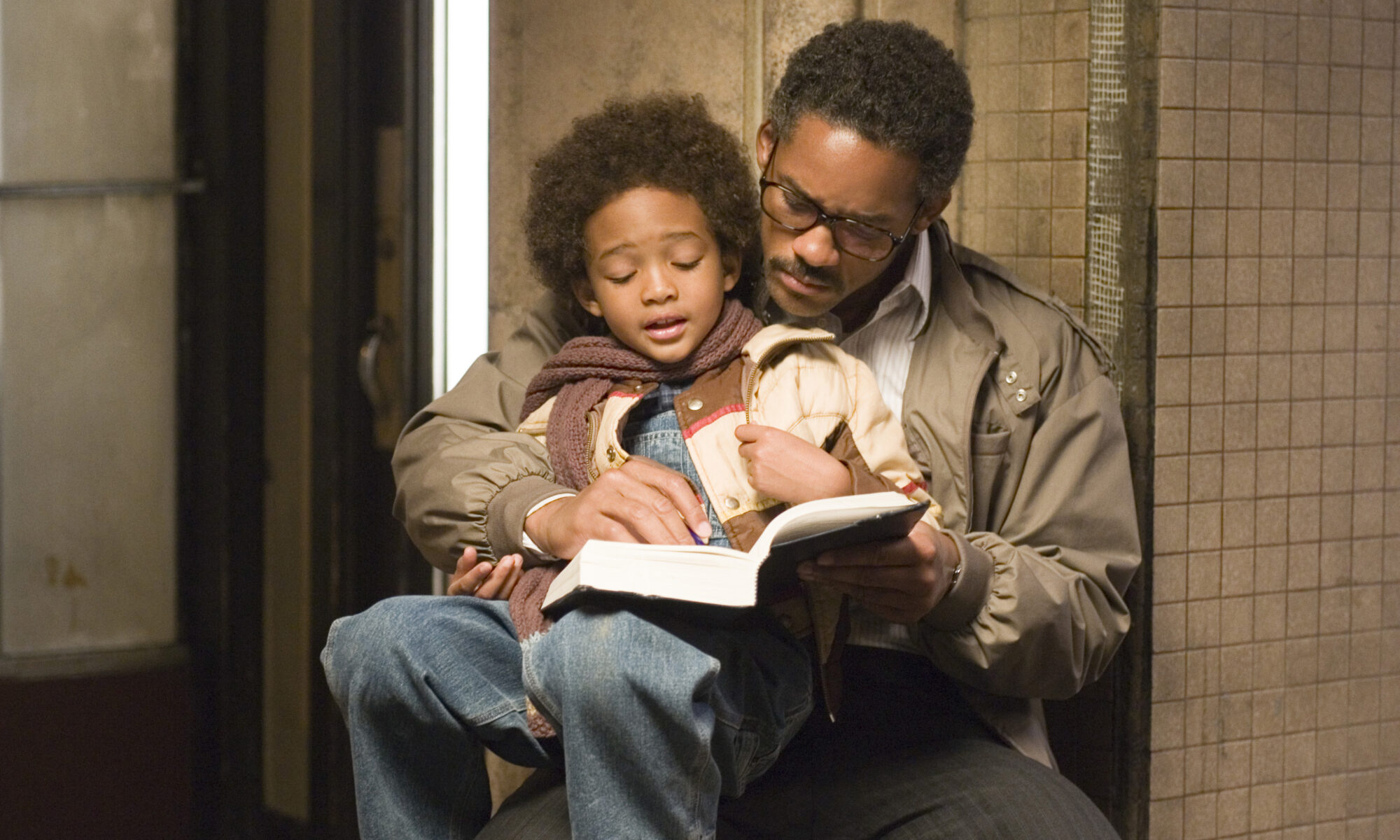 How happy are the humble-minded, for the kingdom of Heaven is theirs!

How happy are those who know what sorrow means for they will be given courage and comfort!

Happy are those who claim nothing, for the whole earth will belong to them!

Happy are those who are hungry and thirsty for goodness, for they will be fully satisfied!

Happy are the merciful, for they will have mercy shown to them!

Happy are the utterly sincere, for they will see God!

Happy are those who make peace, for they will be sons of God!

Happy are those who have suffered persecution for the cause of goodness,

for the kingdom of Heaven is theirs!

We reach back 14 years into our off-line archives for this true and moving story of a homeless father caring for his young son.

Chris Gardner (Will Smith) at first seems like one of those dreamy-eyed men latching on to the latest get-rich scheme but destined never to achieve his goal. He has invested all of his savings to purchase a medical gadget for use in doctors’ offices, but few doctors buy one, even when he is allowed to make his sales pitch. His wife Linda (Thandie Newton) finally becomes fed up and moves out, reluctantly giving in to his demand that he retain custody of their young son Christopher (Jaden Christopher Syre Smith), the only one who retains faith in his father’s eventual success.

Most of the story is a downward arc, the money running out and a sample machine stolen, so that father and son move into a cheap motel, then are evicted even from that. All the while Chris is chasing what seems like a pipe dream: he has enrolled in Dean Witter’s six month-long internship program, with a one in twenty chance of being paid. There’s a catch to the program. Despite the fact that each intern is busy contacting perspective clients, and even selling, there is no pay. No wonder Linda leaves when Chris tells her of the program. The situation at times becomes grim, with father and son spending a night in a subway restroom, and then, when he hears about the homeless shelter at Glide Memorial United Methodist Church, there is a mad scramble to get in line early enough so that they will obtain one of the few rooms available.

Directed by Gabriele Muccino, and written by Steven Conrad, The Pursuit of Happyness is based on a real life person in San Francisco during the Reagan years when, similar to today, the much vaunted prosperity failed to trickle down to a lot of people. The misspelling of the key title word comes from graffiti on the wall outside the day care center where Chris drops off his son each day. As the beginning titles appear, we see close-ups of lines from the Declaration of Independence, a nice device that makes us think a little more about the preamble to that great document.
This review will be in the December issue of  VP along with a set of questions for reflection and/or discussion. If you have found reviews on this site helpful, please consider purchasing a subscription or individual issue in The Store.

The true story of a father and his young son coping with homelessness & a demanding job internship in San Francisco where a church provides shelter--sometimes.
Editor Rating ★★★★★5 out of 5
More Details