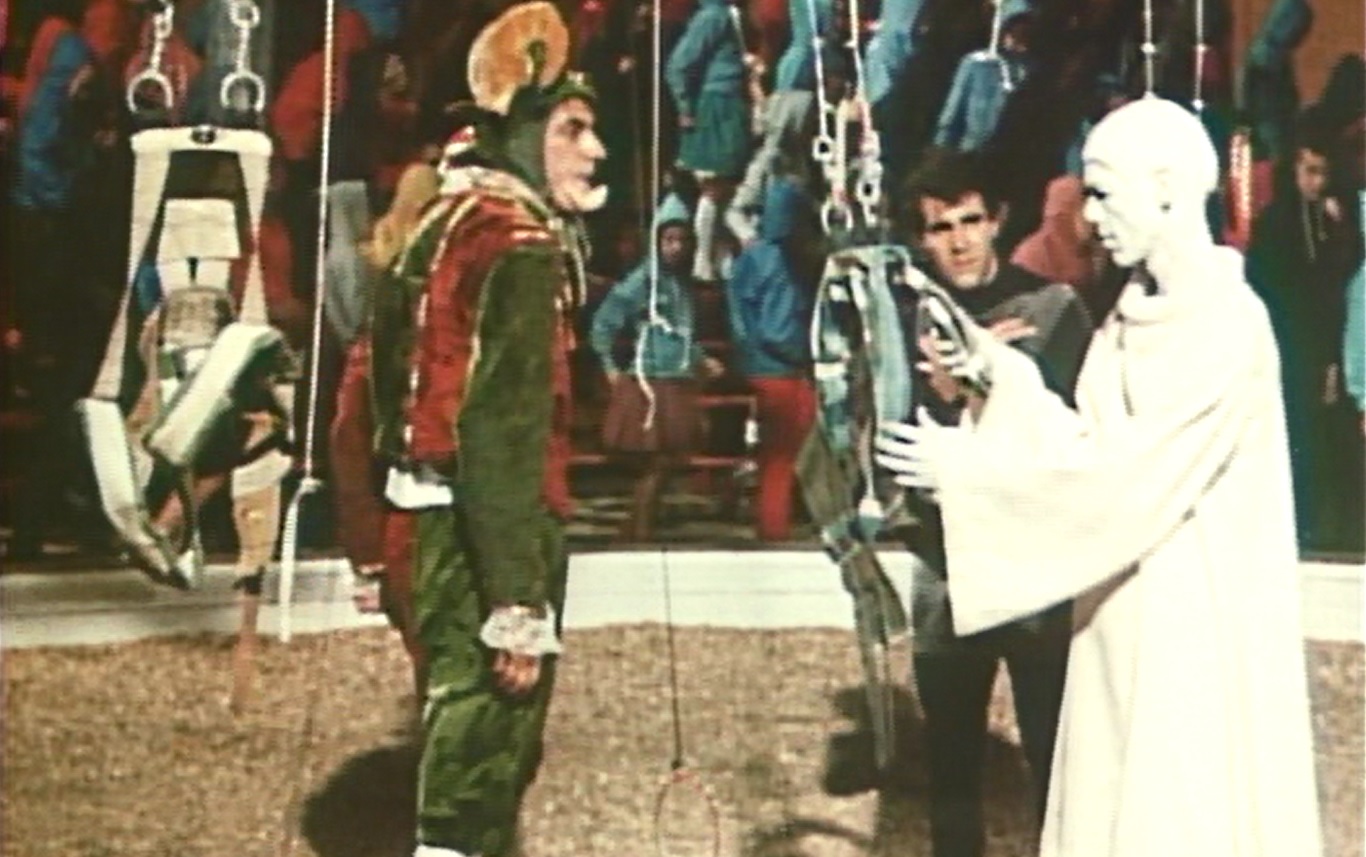 With Easter falling on April Fools Day I thought this article,  reprinted from the April 2007 issue of Presbyterians Today, with a couple of resources updated and the note about Parable added, might be of interest.

WHY THE LONG FACES IN CHURCH?

IS NOT A TRAGEDY.

When Thou Shalt Laugh, a DVD featuring a stage full of Christian comedians, was released last year, some critics were amused by what they considered an anomaly- the idea that Christians could be funny. Let’s face it: many regard Christians as humorless and church services as boring affairs for the seriously pious. But not only are humor and laughter indigenous to the Christian (and Jewish) faith, they are rooted in the very nature of the Bible. Smiles and celebration belong in church, especially at Easter, when we remember Christ’s victory over sin and death.

Godspell got it right

John-Michael Tebelak saw the potential for humor in the gospel story when, joining with composer Stephen Schwartz, he conceived his Broadway musical Godspell. He daringly depicted Christ as a clown, who calls men and women from their humdrum world to form a troupe of comic performers. Through mime, song, dance and vaudeville skits, they sing the good news. Tebelak was very much in tune with theologian Harvey Cox, whose book The Feast of Fools (1969) called the church to rediscover the joyful spirit of the Gospels.

Another popular 1970s musical, Jesus Christ:  Superstar, presents the story of Jesus as a tragedy. It’s the tale of a good Jewish boy who becomes a hapless victim. Lamenting the situation, narrator Judas wonders (to Jesus) “why you let the things you did get so out of hand?” The show closes with the soft music of “John Nineteen Forty-One,” referring to the verse in John’s Gospel about the tomb where the body of Jesus was laid. No resurrection here.

In contrast, Godspell presents the story of Jesus as a comedy, filled with exuberant music, clever sketches interpreting Jesus’ parables, funny pratfalls, soft-shoe dance routines and outrageous comments uttered by Jesus and his disciples. True, the scenes of the Last Supper, Gethsemane and the crucifixion are serious and moving: the disciples sing a dirge-like song, “Long Live God,” as they carry the dead body of Jesus on their shoulders. But then the film version concludes with the disciples breaking into the raucous “Prepare Ye the Way of the Lord.” Jesus’ body is gone, and his risen presence seems mystically embodied in the disciples who are skipping and dancing again as they did earlier in the show.

Tragic elements certainly exist in the story of Jesus. But even the grimmest passages recounting events leading up to Jesus’ death offer hints that the impending tragedy will ultimately be swallowed up in God’s “divine comedy.”

For example, Jesus’ appearance before Pilate, as depicted in John 19:10-11, is a serious confrontation. Pilate challenges Jesus: “Do you refuse to speak to me? Do you not know that I have power to release you, and power to crucify you?”
But Jesus answers, “You would have no power over me unless it had been given you from above.” His reply brings to mind the child’s response to the naked potentate in Hans Christian Anderson’s the story “The Emperor’s New Clothes.” “Look,” the youngster blurts out, “the Emperor doesn’t have any clothes on!”

Jesus’ faith in God enables him to see through the humiliation and pain to the reality that Pilate is not as mighty as he thinks he is. Suffering must be endured; but Easter will reveal that God’s power not only surpasses that of any political leader, it is greater even than sin and death.

Followers of Jesus today view the tragedy of the cross through the lens of resurrection. How much more inviting would Christian worship services be to outsiders, if they embodied this resurrection outlook. The Lord’s Supper, for example, ought to be more like a celebration than a funeral service. Instead of the preacher solemnly intoning the
familiar words of the liturgy against a background of muted organ chords, why not sing a joyful hymn such as “Lord of the Dance” while preparing to share the bread and wine?

A Sunday for laughter

A pie in the pastor’s face during worship is not standard fare in most churches, but it’s no longer unexpected at First Presbyterian Church in Winter Haven, Fla.

Nine years ago the church joined the Holy Humor Sunday movement, and attendance has been climbing steadily for its Sunday-after-Easter service. Associate pastor C. Alan Harvey says church leaders got the idea for the service from an
article in The Joyful Noiseletter (see “Humor helps,” opposite page). They read that early Greek Orthodox Church leaders called the Sunday after Easter “Bright Sunday,” emphasizing the joy and laughter engendered by Jesus’ resurrection.

Last year’s Bright Sunday service at First Church will be hard to top. At the climax of the children’s sermon, pastor Steven D. Negley pushed a pie in Harvey’s face.

It was one of those “guess you had to be there” moments, but the pastors say the stunt somehow related to a telling of the Bible story. The church has adopted the butterfly as a symbol for Bright Sunday. Thanks to Florida’s warm climate, worshipers are able to go outside and release butterflies given to them at the beginning of the service.

Even outside the church, a resurrection outlook informs the performances of classic comedians such as Charlie Chaplin. For Chaplin’s Little Tramp character, life is a dangerous and humiliating waltz among the slippery banana peels of life. He suffers many falls and disappointments, but each time he stands up again, retrieves his cane and dusts off his fallen hat. Then, after doing a little hop/dance step (I like to call this his resurrection dance), he heads down the road into a new day.

Resurrection-centered faith is the basis for clown ministry, a movement that sprang up around the country in the 1970s. Inspired by Paul’s words about “the foolishness of God” (1 Corinthians 1:26-31), chaplains at retirement homes and hospitals have donned clown make-up to lift the spirits of patients and demonstrate the healing effects of humor. As
Lutheran minister Floyd Schaffer put it in his 1984 book If I Were a Clown, “a clown is someone who lowers himself, in order to lift someone else up.” (Not a bad description of Jesus’ ministry.)

Many of us approach. the Bible with such seriousness that we miss the comic element in some of its stories, But readers looking for humor will not be disappointed. For example:

In his ground-breaking book The Humor of Christ (1964) theologian Elton Trueblood pointed out examples of the under-appreciated humor of the Gospels: Jesus accuses show-off hypocrites of blowing horns before giving alms. He warns that when blind (leaders) lead the blind, both will wind up in a ditch. And he compares a money-obsessed person seeking to enter the kingdom of heaven to a camel trying to squeeze through the eye of a needle. Some humorless scholars have attempted to “explain” Jesus’ hyperbolic joke about the needle’s eye by suggesting that there must have been a low gate
in the Jerusalem wall through which a heavily laden camel could pass only by kneeling and inching its way through.

Genesis 21:17-21
God chooses a childless couple in their 90s to begin the family of “chosen people.” Ludicrous! No wonder Sarah and Abraham laugh when God tells them they will become parents. When Sarah finally does bear a son, the parents name him Isaac, which translates as “Laughter.” Sarah declares, “God has brought laughter for me; everyone who hears will laugh with me.”

Hebrew storytellers must have chuckled over the saga of the contentious twins, Esau and Jacob. They begin competing against each other while still in the womb, each trying to position himself to emerge first and thus have the rightful claim
to the family inheritance. Second-born Jacob enters the world holding onto Esau’s heel, trying to pull his brother back into the birth canal. Jacob manages to trick Esau out of his birthright, but the trickster gets a taste of his own medicine when he finds himself tricked by Laban into marrying the wrong woman.

It’s hard to miss the humor when Balaam’s donkey is depicted as having more sense than its owner.

Isaiah 44:9-17
Satirical passages like this one in the book of Isaiah show the absurdity of making and worshiping idols.

The delightful story of Jonah could be subtitled, “Your legs are too short to run from God.” Don’t get hung up on the question of whether or not a person can survive in the belly of a whale, or you’ll miss both the humor and the point of this fisherman’s tall tale.

The books mentioned in the article, by Cox, Trueblood and Shaffer, are out of print but are available through Amazon.corn. Go to the “Book” section and type in the title to find used book dealers that sell them. Other books
related to humor and the gospel: • The Gospel According to Peanuts, by Robert Short (Westminster John Knox Press, 1964; reprinted often)