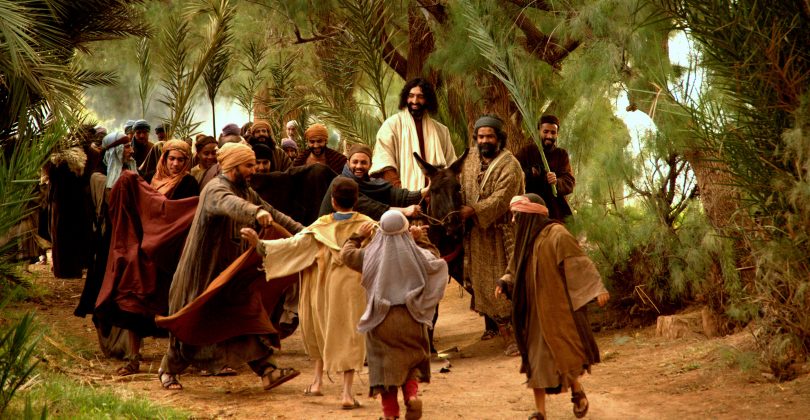 This Lumo Project film is the last of the four filmed gospels directed by the prolific director/producer David Batty. It is a wonderful addition to any pastor or educator’s video library, bringing to life the words either of the KJV or the NIV translations of the Bible—viewer’s choice. British actor Richard E. Grant reads the NIV text, Sir Derek Jacobi the KJV.

Yes, this is another film that does not add any extraneous stories to the Biblical text, unlike The Greatest Story Ever Told or King of Kings. The actors portray the various characters, but they speak in Aramaic as the celebrity reads the text. You only occasionally hear the low volume Aramaic because the English Biblical text is read over it and is under girded by Amory Leader’s soaring music.

Again, it is a well-known Brit who portrays Jesus, though he looks the part more than some of the other blue-eyed actors in other Jesus films. Costumes and sets are very good. I especially appreciate this version because all of the parables exclusive to Luke’s Gospel are included. This will be cherished by preachers and teachers during the lectionary cycle when most of the Gospel passages are from Luke.

The Lumo Project is an organization dedicated to translating the Bible into at least 1000 languages—thus far having reached the 850th language mark. Their version of all four Gospels are available as DVDs or accessible on Amazon Prime. Compared to the Visual Bible DVDs, the Lumo ones are spare in “extras,” there being no verse by verse numbers at the bottom of the screen or in the DVDs listing of “Chapters.” Therefore, I will be including a listing of major events and teachings (including parables) with this review in the August Visual Parables.

My other criticism is the decision to have the actors speak in Aramaic. I appreciate the intention to be authentic, but I much prefer the Visual Bible’s having the supposed author of the Gospel read the narrative and the actors speak the dialogue portions, the choice of the colloquial Good News Bible being especially suitable for a movie script. Having the celebrity reading the entire text over the actors’ speaking Aramaic takes away the sense of immediacy that the Visual Bible version conveys. It’s like attending a play in which the actors speak in a foreign language and your companion offers a running translation of the dialogue. Nonetheless, I will use and treasure my Luke DVD—it’s the only one available, and it is certainly useful in teaching and preaching, especially with the addition of my episode guide.

This review will be in the August issue of VP along with the video cues for finding an incident or parable. If you have found reviews on this site helpful, please consider purchasing a subscription or individual issue in The Store.

Luke's version of the life of Christ is dramatized with actors speaking in Aramaic while a noted celebrity reads the text in the NIV--no additions to the text.
Editor Rating ★★★★★4.5 out of 5
More Details