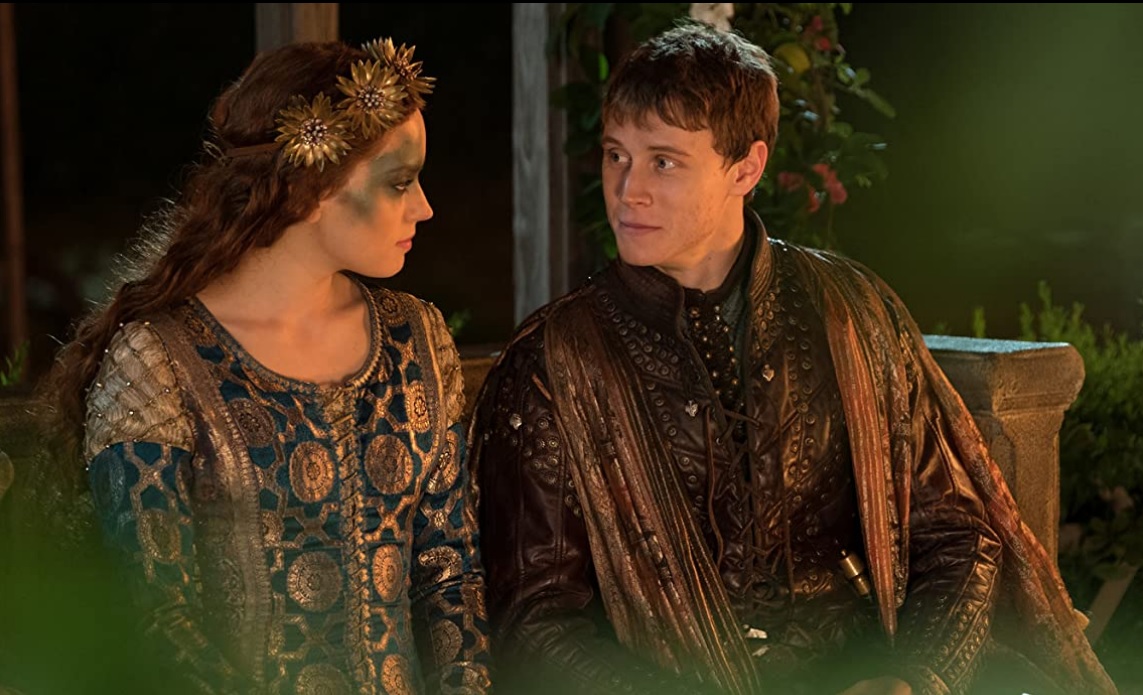 
You shall not take vengeance or bear a grudge against any of your people, but you shall love your neighbor as yourself: I am the Lord.

Australian director Claire McCarthy gives us love story based on Shakespeare’s great tragedy Hamlet. We need to add that the script by Semi Chellas is based on Lisa Klein’s 2006 young adult novel of the same title. Though calling this a Feminist’s take on Shakespeare’s play might be an overstatement, there can be no doubt that this Ophelia is vastly different from the Bard’s passive character. At the very beginning Ophelia, in a voice over says, “You may think you know my story. Many have told it. It has long passed into history… into myth. I was always a willful girl.”

We are given a back story in which Ophelia (Mia Quiney) is a young commoner at the Elsinore Castle taught to read by her brother, and Prince Hamlet (Jack Cunningham-Nuttall) is a 15-year-old about to depart for the University of Wittenberg. Queen Gertrude (Naomi Watts), impressed that the girl can read, decides to make her a lady in waiting. Her father Polonius (Dominic Mafham) serves as the chief counselor to King Hamlet (Nathaniel Parker), but this does not induce the other ladies to welcome her into their circle. All noble-born, they scorn the newcomer because she is commoner by uttering such insults as “She smells of garden soil” and “Ophelia, you dance like a goat.”

Ophelia (Daisey Ridley) catches the eye of Prince Hamlet (now played by George MacKay), but his courtship is cut short by his return to his studies at Wittenburg. King Hamlet’s brother Claudius (Clive Owen), lusting for both Gertrude and the throne, begins to woo the Queen. Because King Hamlet has greatly neglected her with his plans for war, Gertrude proves an easy conquest for the usurper. Ophelia observes the pair several times during this process of betrayal. The girl also is sent into the forest by the Queen to obtain a healing potion from Mechtild (also played by Naomi Watts), a healer living in seclusion because she had been accused of witchcraft. She will prove to be important to the complicated plotting of the Queen—indeed, she is revealed to be the Queen’s twin sister who once was in love with Claudius.

The complicated plot includes elements from the original play plus the designs set in motion by Ophelia what lead to a different result from the original. You will recognize many of the original quotes, but put in more modern form, especially the famous farewell speech that Polonius gives to his departing son Laertes (Tom Felton). There is no “To be or not to be” soliloquy, though several allusions are made to Hamlet’s indecisiveness. Ophelia declares to the Prince, “There are two sides struggling within you; one is baser, one is better.” Later she will entreat the vengeance-minded Hamlet to lay aside his determination to kill his uncle, but he will pay her no heed.

How different from Hamlet is this version of Ophelia, determined to speak her mind and work her will. There is a “ghost” upon the castle parapet, but it is Ophelia who sees it, and not Hamlet—and it turns out to be a very flesh and blood creature. Later, Ophelia will cleverly stage a mad scene and engage in a fake death that reminds one of Romeo and Juliet, in that it involves swallowing a potion that imitates death.

When Prince Hamlet, suspicious that his uncle has killed the King, stages his play in order to observe the usurper’s reaction, the filmmakers brilliantly turn it into a shadow play cleverly staged to reenact the murder. Claudius reacts with such rage, ordering the actors to be executed and banishing the Prince to England, though in reality he has ordered the murder of his nephew.

The film is beautifully filmed with its elaborate costumes and lavishly staged court dances. The music well supports the scenes, and the intriguing lines that we hear sung over and over–“Doubt that the stars are fire, Doubt that the sun doth move, Doubt truth to be a liar, But never doubt I love”–come from the play. On the IMDB site we are told this comes from Act 2 scene 2 page 5 when Ophelia’s father Polonius reads aloud a letter from Hamlet. How appropriate they are, matching the lines from the Song of Solomon, which we also hear in Ophelia and Hamlet’s wedding scene.

The film can be seen as both a tragic love story and a warning against vengeance seeking. As mentioned above, Ophelia tries to convince Hamlet against committing regicide, but his hatred for his uncle and his disgust at what he deems the fickleness of his mother prove stronger than her love for him. This leads to the familiar tragedy in the duel between Hamlet and his now brother-in-law Laertes, the intent on violence ending in violence that consumes virtually all concerned. The “two sides” that Ophelia saw struggling within her lover are so universal and destructive that the ancient Torah includes a commandment against vengeance, one quoted much later by the apostle Paul (See Romans 12:19)

Shakespeare purists might balk at this refocusing of attention on a subsidiary character of his great drama. Those aware that he too was caught up in the patriarchal system of his time, and thus usually saw female characters as props for, and certainly as subordinate to males, might welcome this fresh view of the play. I loved the new ending, one that gives Ophelia the last word.

Shakespeare's tragedy is given a new twist by making Ophelia the central & stronger, character in this tale of murder & vengeance.
Editor Rating ★★★★★4 out of 5
More Details