Skip to content
Note: the following contains some plot revelations necessary so if you have not read the novel or seen the film, beware–you might want to wait till you have.
Rated PG-13. Our Ratings: V -5; L -2; S/N -1. 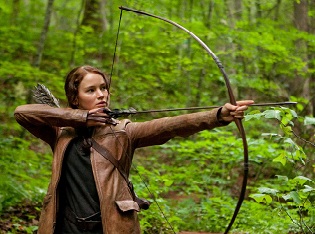 No shrinking violet, this heroine!
© 2012 Lionsgate Films
No one has greater love than this, to lay down one’s life for one’s friends.
John 15:13
Do nothing from selfish ambition or conceit, but in humility regard others as better than yourselves.
Let each of you look not to your own interests, but to the interests of others.
Philippians 2:3-4