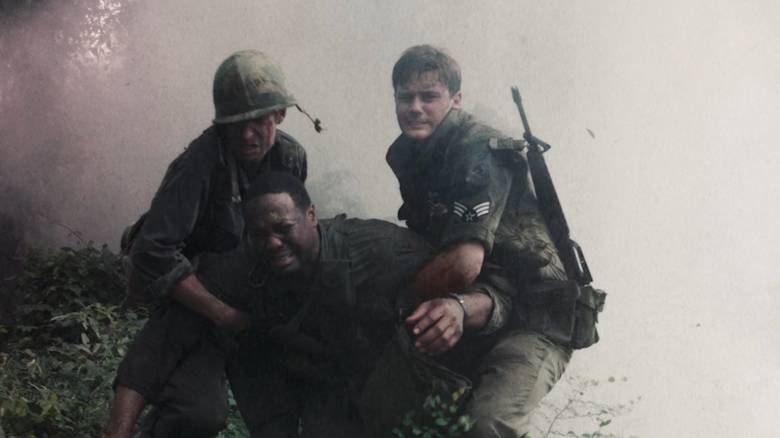 
No one has greater love than this, to lay down one’s life for one’s friends.


Todd Robinson’s The Last Full Measure includes combat scenes, but it is not your usual war movie. Instead it is about the aftermath of the Vietnam War, dealing with a 30 year long attempt by veterans to obtain the Congressional Medal of Honor they fervently believe their heroic comrade William Pitsenbarger deserves. It is also a depiction of the cruel after effects of war upon men who have done and seen too many horrific things.

Scott Huffman (Sebastian Stan) is a civilian bureaucrat at the Pentegon when former Sgt. Tom Tulley (William Hurt), an aged Vietnam vet who served as a medic, shows up in Washington DC in a 30-year long quest to secure an upgrade from the Air Force Cross that the deceased pararescue medic William Pitsenbarger received. He and his buddies have always believed Pistenbarger should have received the Medal of Honor instead.

Huffman balks at being assigned to look into the matter, especially in light of his moving on to another higher level position. “There’s nothing in this for me,” he says. However, once he goes off to interview some of the men saved during what was called Operation Abilene, the desk jockey meets with Billy (Samuel L. Jackson), Jimmie (the late Peter Fonda), Ray (Ed Harris) and Kepper (John Savage). All have been damaged by the bloody engagement in which their unit suffered a casualty rate of 80%. Jimmy suffers so much from PTSD that he cannot sleep at night. None of the men, being in the Army, knew Pistenbarger, but they had witnessed his incredible courage under fire so intense that a few of their comrades laid on the ground frozen by terror.

There are frequent flashbacks to the Vietnam jungle where the American soldiers have stumbled upon the jungle bunkers serving as a Viet Cong headquarters. Snipers in trees and machine gun squads and scores of VC flitting through the bush rake the soldiers with gun fire, wounding their medic as well as killing and wounding dozens of others.

Pistenbarger, in a helicopter a hundred feet or so above the battle, notes that the wounded marine they hoist up is their medic, so he decides to drop down to take his place. During the next few hours he tends to the wounded and the dying. As the VC close in he picks up a gun to help defend their tiny patch of land, eventually helping to save some sixty wounded men. His crew above signal him to come up before it is too late, but he waves them off. He does not know any of the soldiers. They are Marines and he is Air Force, but they need him and he is not about to leave them. And so he pays, in President Lincoln’s words from his Gettysburg Address, “the last full measure,” cut down by an enemy sniper.

After over 30 years of trying to get the Cong. Medal of Honor for a medic in Vietnam who gave his life for them, they succeed in getting a Pentagon lawyer to take up the cause, but there are obstacles.
Editor Rating ★★★★★4 out of 5
More Details