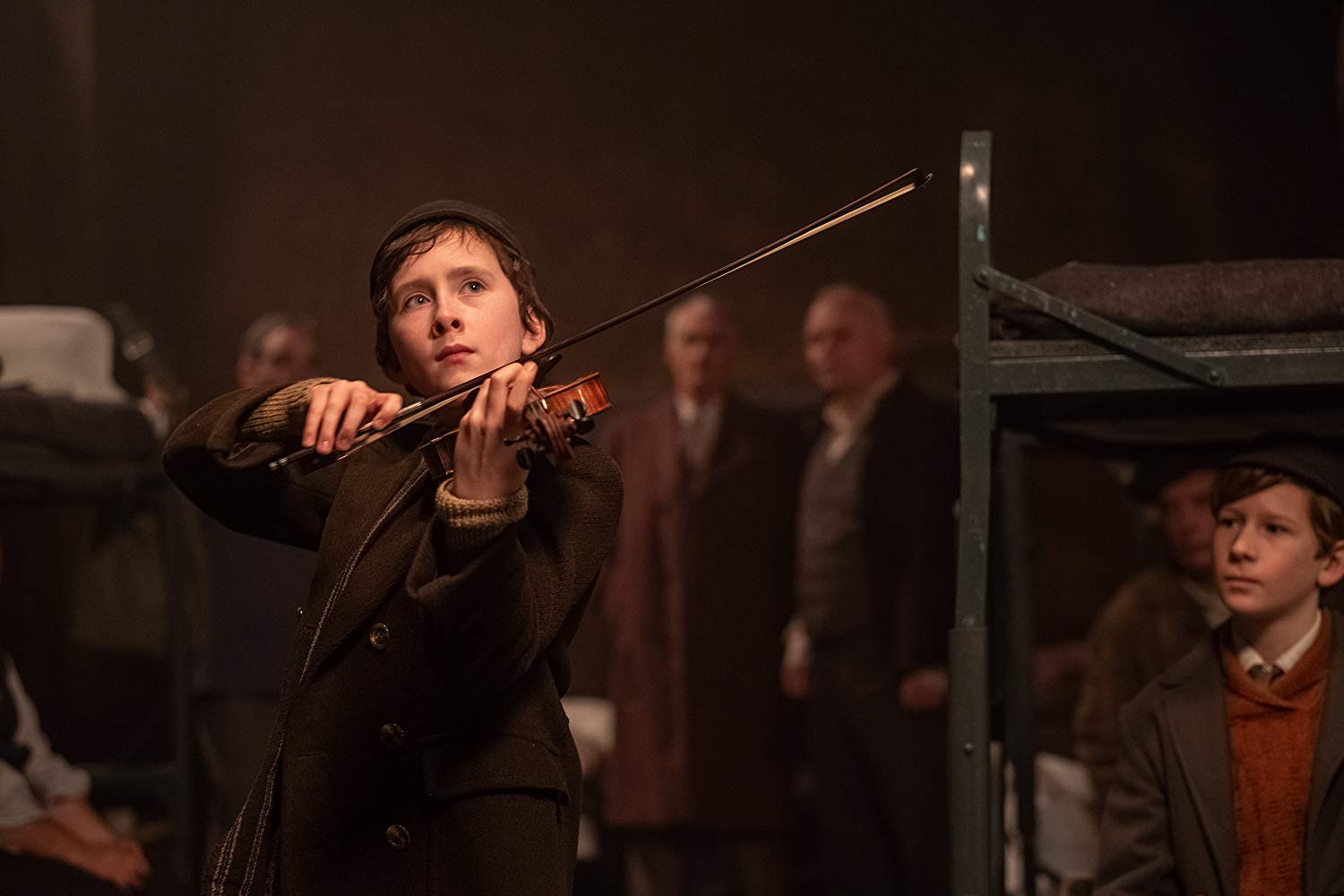 Even my bosom friend in whom I trusted,
who ate of my bread, has lifted the heel against me.

French Canadian filmmaker writer-director François Girard, who gave us the exquisite The Red Violin in 1998, gives us another film in which a violin is important. Instead of transpiring over several centuries, this film spans the years from Hitler’s invasion of Poland to the night of a concert in 1951 to the 80s when a mystery is at last solved and a broken relationship—and heart—is restored. Co-script writer Girard (with Jeffrey Caine) derived his script from a novel by Norman Lebrech, the title referring to a ritual recitation, set to music, of the names of all those who died at Treblinka concentration camp.

The film begins at a London concert hall in 1951 where Martin Simmonds and his father Gilbert anxiously await for violinist Dovidl Rapaport to show up for his debut. Mr. Simmonds, a music publisher, had raised Dovidl for 12 years and had put all of his savings into the financing of the event. The violinist does not show up, and the surrogate father loses much of his wealth, as well as his health, dying soon afterward. There is no word, ever, from the missing young man.

In a flashback to 1938 Zygmun Rapoport brings his a 9-year-old Jewish violin prodigy from Warsaw hoping to find a sanctuary for him there before Hitler starts his war. Mr. Simmonds (Stanley Townsend) agrees on the spot to take in the boy, assuring the visitors that Dovidl can share his own son Martin’s room. However, Martin is upset that he must share a room with the arrogant immigrant. He also resents that his mother, out of respect for their guest, has turned all their meals into Kosher affairs, with some of the dishes definitely not to his liking. This mutual hostility continues for a while, but eventually gives way to a feeling of brotherhood. Though no musical genius, Martin is a good enough piano player to accompany his friend during practice sessions.

Mr. Simmonds becomes involved in furthering Dovidl’s lessons and future career by purchasing him an expensive vintage violin. The boy anxiously awaits word concerning his family in Warsaw, but there is no answer. During the London Blitz there is one of the most thrilling musical scenes in the film when the family crowds into a cavernous bomb shelter. Of course, Dovidl has brought along his prized violin, and when he spots a slightly older rival, he takes out his instrument and, standing in the aisle like a challenging duelist, starts playing. The rival takes out his violin, strides into view of the younger player, and the two engage in a glorious musical “duel.” (A duel by a dual?)

When word of the Nazi concentration camp atrocities, Dovidl assumes his parents must be among the murdered, so he angrily renounces his religion. He tells Martin that it is like taking off his clothes.

Jump to the 80s and now the grown Martin is a music teacher, still haunted by what he regards as a betrayal by his childhood friend. He has searched all over Europe for his missing roommate. (I deleted “friend” for he is now too bitter.) At a music contest he notices that a talented violin player kisses his rosin after applying it to his strings. This unusual act is just like Dovidl used to do. This sets Martin on a quest that leads him to Warsaw and Treblinka and eventually to New York City where he finds his answers—and in a synagogue there hears the rebbe sing “The Song of Names,” a haunting piece paying tribute to the murdered so that the murdered will not be forgotten.

The reunion is a stormy one at first before it leads into the beautiful musical scene. Martin’s long-term anger over his father’s death caused by Dovidl’s unexpected flight explodes in the car they are traveling in to reach the synagogue. We see that the Dovidl’s spiritual journey had led him from survival guilt back to his father’s faith, but precluded any kind of a public musical career.

The film may be slow moving for action fans, never showing the Holocaust close up, but only at a distance—geographical in the London war-time scenes, and chronologically in the post-war episodes. The closest we get to the Holocaust is when Martin visits Treblinka, the filmmakers being the first to gain permission to film at that stark memorial. But filled with beautiful music by Oscar-winning composer Howard Shore (“The Lord of the Rings: The Fellowship of the Ring”) and fine acting, it will be one you will remember for a years to come. Because of the long time span the roles of Martin and Dovidl are played by 3 sets of actors– Dovidl is played by Luke Doyle at ages 9-13, Jonah Hauer-King at ages 17-23, and by Clive Owen in middle age. Martin is played by Misha Handley at ages 9-13, Gerran Howell at ages 17-23, and by Tim Roth in later life. All are excellent.

Though not produced as a direct answer to the rise of anti-Semitism in Europe and America, the film will nourish the souls of those who feel called to resist this poisonous movement. Film producer Robert Lantos says that when the crew was shooting at Treblinka they saw a large irregular shaped rock, engraved with two words, in several languages: “Never Again.” “For me,” he said, “ those two words encapsulate the most important reason a film like this needs to be made.” And why it needs to be seen.

A violin prodigy is raised in London, being left by his Polish Jewish father for safety from Hitler, but when older he fails to show up for the concert his foster father has arranged.
Editor Rating ★★★★★4 out of 5
More Details